Political Pressure on Serbian Media Begins to Show on TV Rumors and stories from insiders about increased media repression by political parties and politicians in power in Serbia have been circulating for several months. But signs of a repressed media landscape in the country are only now becoming visible, with cancellations of politically “undesirable” guests for live television shows and, perhaps, entire shows being taken off the air.

Serbia's most popular political talk show “Utisak nedelje” (“Impression of the Week”), for instance, had a highly unusual change of guest on Sunday, January 26. The show features host and author Olja Bećković interviewing high-profile political personalities and includes highlights of ten clips of the week's news as well as live calls from viewers who vote on which of the events left the biggest impression on them. It has been a long-standing fixture of Serbian television, airing every Sunday evening on B92 Television, and counts one of the most popular Twitter hashtags in the country.

Bećković was once known for putting her guests on the spot and asking tough questions, but many viewers have been commenting that she seems to have gone soft in recent months. During the week prior to the January 26 show, the show's page on the official B92 website, its Twitter account and other outlets announced now former Minister of Economy Saša Radulović as the guest for that live airing. But on Saturday, January 25, an unnamed official from the ministry announced that Radulović had handed in his resignation as minister. The resignation had been more or less expected for weeks as well as an announcement of early elections amid turmoil within the ruling coalition – made up of the Serbian Progressive Party (SNS) and the Socialist Party of Serbia (SPS) –  due to the slow implementation of promised reforms in several sectors of government. Radulović is not a member of any party and had been Minister of Economy since September of 2013.

That same day, B92 and its affiliates announced that Deputy Prime Minister and head of the largest party in the ruling coalition SNS Aleksandar Vučić would be Bećković's guest on the January 26 show instead of Radulović. Any doubt that Radulović may have cancelled his appearance on the show himself and that the host had simply substituted him with another important political figure was soon erased on the former Minister's personal Twitter account when he began retweeting other Twitter users’ questioning of why he was not appearing on the show that night. Radulović also retweeted the disappointed comments of social media users that his guest slot had been handed to Vučić, with no explanation from B92 network or the show's host.

Many users took to social networks to complain about the unexplained and highly suspect last-minute change in programming. Journalist Aleksandra Ranković, upon hearing of the change, tweeted:

olja bećković first invited then yesterday uninvited saša radulović to utisak [the show]. so much for the integrity and character of the author of the strongest serbian talk show.

In response to her observation, Twitter user @kombib wrote:

@alex_timeline @AtilijaDamaskin So the impression of the week is that Radulović was invited, but Vučić showed up. #utisak

Coincidentally, Deputy Prime Minister Vučić also called for early elections that weekend, which local and international media promptly announced on Sunday, January 26. According to press reports, the Deputy PM said that parliamentary elections had been set for March 16, 2014. Many have also commented since, including former Prime Minister Zoran Živković, who now leads a start-up political party just registered in 2013 dubbed New Party (NS), that a deputy PM announcing early elections is not only an unorthodox practice but directly in conflict with the Constitution of Serbia.

Blogger and HR professional Nikola Jovanović also tweeted the disappointment that many regular viewers of the show were voicing that evening:

I can't wait for tonight's #utisak to find out why I resigned.

The former minister also decided to publicly explain his reasons for resigning days later on January 28, sending his full statement to national media. The page on national news agency Tanjug's website on which this statement was first published was soon taken down by Tanjug for no apparent reason and with no explanation. Aleksandar Kokotović, International Outreach Director at libertarian NGO Libek, commented on the coincidence that quickly after Radulović's statement was taken down from the site, an article in which Minister of Finance Krstić praises Deputy PM Vučić as a reformer appeared on the same site:

45 min after taking down the news in which @SasaRadulovich explains his resignation @TanjugNews publishes this piece of news http://t.co/8OaZkuhjxi VUČIĆ THE REFORMER

A Facebook page supporting former Minister Radulović's reform efforts posted an image of the two different announcements for the B92 talk show in question, one announcing Radulović as a guest and the other announcing Vučić. It also called on social media users following the show to tweet #utišan (#silenced) along with the standard #utisak (#impression) hashtag used by viewers while watching the show, as a sign of protest against repression and abuse of media by the ruling coalition. Many users did exactly that on Sunday night, calling attention to the alleged bias of “Impression of the Week”, as well as to other political matters troubling the country ahead of another election.

During the live airing of the program and in reference to the deputy PM's comments regarding what needed to be done in the counrty, former Minister Radulović commented on Twitter:

Good news: now that we have slowed down, halted and set up booby traps for reforms, we are now for reforms. Only faster. #utisak

#utisak “One Flew Over the Cuckoo's Nest”

A more recently created show, “24 minuta” (“24 Minutes”), a satirical version of the news overview not unlike “The Daily Show with Jon Stewart”, on the same television station was supposed to return to television screens after a winter break. “24 Minutes” is usually broadcast immediately after “Impression of the Week” and has become massively popular among audiences for its satirical critique of the government and of the country's political landscape. But it did not air that evening and no explanation was given as to whether its winter break is still on or the show has been cancelled. Whatever the situation regarding “24 minutes”, the involvement of the ruling coalition in Serbian media is quickly becoming apparent. 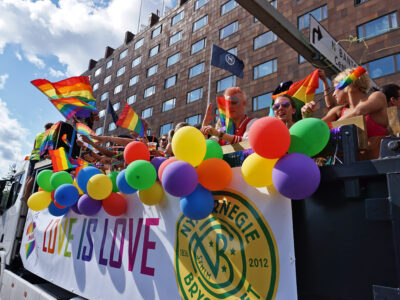