While the pardoned Mikhail Khodorkovsky [Global Voices report] doesn't appear in any hurry to set up Twitter or Facebook accounts and join Russia's chattering classes, the recently amnestied Pussy Riot band members [Global Voices report], Maria Alekhina and Nadezhda Tolokonnikova, are already micro-blogging up a storm. Of course, unlike the former head of Yukos, they didn't spend the last 10 years in prison — as Khodorkovsky noted in his press conference [ru], both Facebook and Twitter didn't even exist when he was arrested. 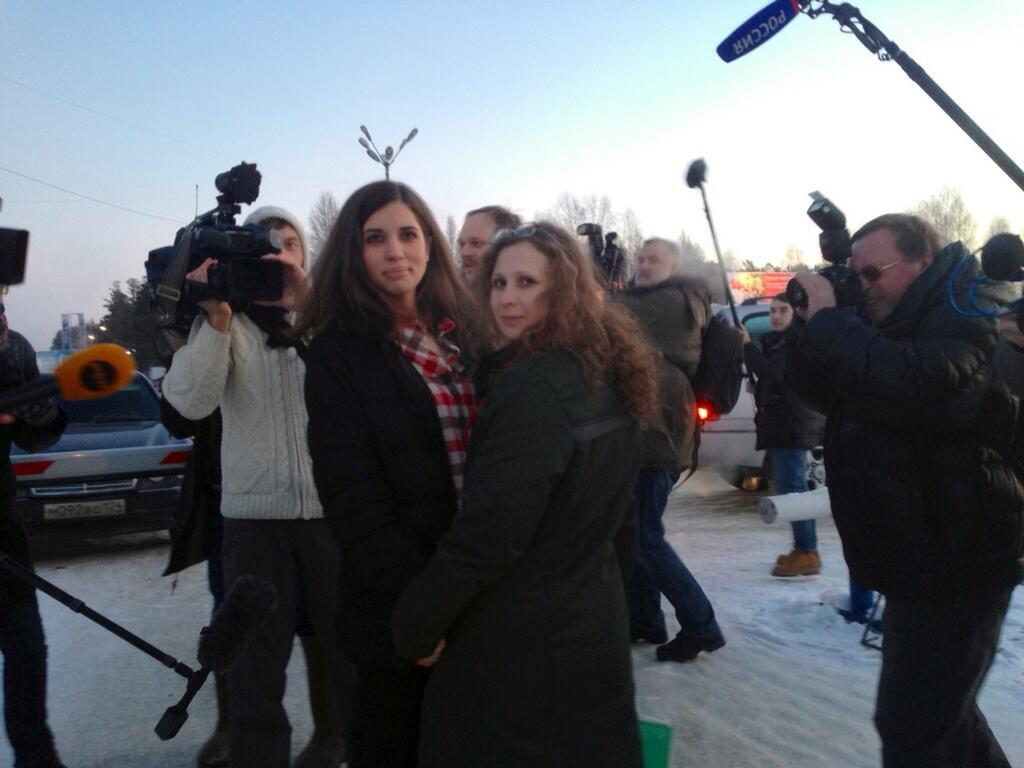 Tolokonnikova and Alekhina reunited in Krasnoyarsk.

Alekhina opened a Twitter account, @malehina [ru], and has already tweeted 82 times. A sizable portion of these tweets, however, are a seemingly random collection of pithy sayings, like:

Always choose the most difficult path — there you won't face competition!

Tolokonnikova, on the other hand, resumed tweeting from her old account @tolokno [ru]. Her tweets are also eclectic. For instance, a few hours ago Tolokonnikova wondered [ru] why Russian prisons ban eyebrow tweezers — one can go to solitary confinement if found with a pair. (I am no expert on Russian prisons, but the reason is likely the same as why they are banned on airplanes.) At the same time, she appears to have mixed feelings about her early release during the holiday season:

I've been released – but otherwise tomorrow we would be celebrating Christmas with my Protestant convicts.

Update: Alekhina's Twitter account turns out to be fake and was suspended by Twitter. The counterfeit was good enough that Tolokonnikova herself was fooled, although she later deleted her tweet welcoming Alekhina to the service.
Update 2: According to BuzzFeed's Foreign Editor, Miriam Elder, Alekhina has now officially joined Twitter using the handle @MashaAlekhina, though Alekhina has yet to tweet anything as of December 26, 2013.