Chungui: Digging up the Horror of Terrorism in Peru 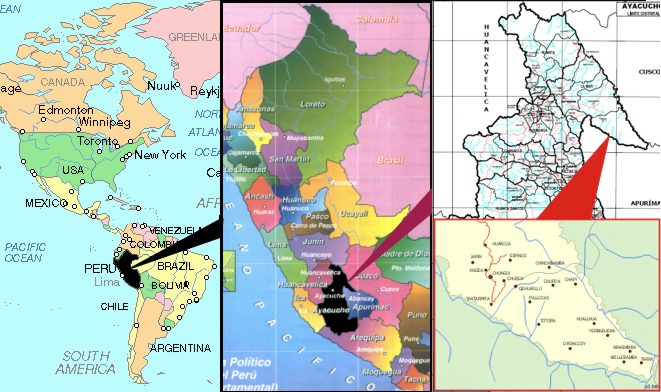 Chungui, the district, is part of the La Mar province in the Ayacucho region. A part of the district is known as the Oreja de Perro (Dog Ear) because of its resemblance on a map. Picture by Moner Lizana from the web site chungui.info

Thirty years ago, hundreds of civilians were victims [es] of the terrorist group Shining Path and of the counterinsurgency actions of the Peruvian government forces in the Chungui and Oreja de Perro (Dog Ear) [es] communities, in the Ayacucho region. Many of these victims were buried in unknown mass graves, and the exhumation and identification of their remains has just recently begun.

The terrorist group Shining Path was born precisely in Ayacucho, and its strategy was to arm the poor and traditionally exploited countrymen to besiege the major cities in the country. The implementation of this strategy meant that many peasants were forced to become part of Shining Path or help the armed cells in various ways, which in the eyes of the Army qualified these peasants as terrorists.

The Truth and Reconciliation Commission, established to investigate the political violence that plagued the country in the 1980s and 1990s, released the testimonies [es] gathered in Chungui and Oreja de Perro in their final report, with a timeline of the events that took place from 1967 to 1995. After reading this story, it is clear that the district suffered not one or two attacks, but many armed assaults and intimidation actions by Shining Path during the 1980s, including the massive killing of community members and the execution of civil authorities. There were allegedly 1,384 terrorism victims in the Chungi district alone.

This is what a woman who witnessed the Santa Carmen massacre in 1982 told the commission:

These men had a big book with them and they called a list and said my dad's name, pronouncing XZ and taking him outside; so my dad was called XZ, “here boss”, my dad answered. They said, well, well, they are calling you, run, run, they are calling your from there, and they made him run to the school. Various persons were waiting for him behind, like six or seven were waiting, and around the wall there were more people. Then my dad got there and as soon as he faced his back to the school, one of them took him from behind and started kicking him and when my dad tried to defend himself, he was stabbed.

They stuck a knive into his back and my dad starts to punch and kick and pah, pah, pah. They throw him and step on him and my dad didn't die; but when he was stabbed again in the belly and the heart my dad yelled: “ayyyyyyy, ayyyyyyynoooo” only three times. And then, after that, they called another gentleman from the list and then too, he replied “here”, and was asked also to run, run; and then again another one, run. The list goes on, and eight people died.

On January 2013 the remains of 78 exhumed victims of the Chungui zone [es] were delivered to their families [es], and this was only the beginning. The same year, in August, the Specialized Forensics Team (EFE) – a unit of the Public Prosecutor's Office, announced [es] the finding of human remains of 200 people in mass graves in the Oreja de Perro zone and the beginning of the work to get them back to their families. The forensics team chief, Ivan Rivasplata, said [es] that it is still uncertain if these persons were victims of Shining Path or the Army.

The chronicle [es] of the exhumation process, published by a local newspaper, is a painful re-count of the years of terror and how, even though so much time has passed, the mourners are interested in recovering whatever is left of their assassined family members; and they help by giving all the necessary information to find more mass graves and undercover burial sites. “In this town [Amaybamba] waits Valentín Casa Quispe, a young 36-year-old muleteer who carries in his 10 sumpters all the baggage and tools for the exhumations. He has a special interest in helping the prosecution team, because he thinks that in one of the mass graves he'll find the remains of his murdered mother, who died in 1986 when he was a 9 year-old boy.”

Many children were left orphaned and had to manage [es] to survive by any means. “Eugenia was 7 years old when her sisters were executed in the town of Chaupimayo and her dad in the military base of Mollebamba in 1984. After this tragedy, the girl spent two years in the mountains eating parboiled herbs and raw corn. […] ‘When the army captured me and took me to Mollebamba, I was already 9′. The military handed her to a countrywoman, Lorenza Hurtado, who forced her to put her cattle out to pasture and serve inside her home. ‘The lady mistrated me, she yelled at me and always told everyone in the community that she took in a little terrorist’. A year later, her uncle, Antonio Quispe Nieve, rescued her and took her to Andahuaylas.”

Despite everything, you could say Eugenia was lucky compared to they children who lost both their parents and their identity when they were not murdered.

Out of the 56 victims that were found in Chungui, 26 are kids

Journalist Jacqueline Fowks, on the blog NoticiasSer, shared the story of Rigoberto and Marina's little brother. They asked the army to take him by helicopter to the Huamanga Hospital because he was very sick. After that, they never heard from him again. The journalist adds [es]:

This is not an isolated case. A health worker from Ayacucho has refered to workers and social assisstants from that time who took by helicopter sick or injured kids, or children whose communities were ravaged; and then, they never gave them back. They took them to orphanages, with no name, and later workers registered them as their own.

In the blog GranComboClub, the economist Silvio Rendón after reviewing the violent story of Chungui and Oreja de Perro, compares and concludes [es]:

The Chungui area was the stage of an insurgent-counterinsurgency war during the eighties and nineties and today is part of the “VRAE”, the valley of the rivers Apurimac and Ene, a coca zone where there are still armed actions against the Peruvian state. What happened 45 years ago is a sign of issues that persist in recent Peruvian history. And as we saw in 1965: Gran Pajonal uprising [es], there was no “truth commission”, no military trials, no accusations, nothing of the sort. Things just stayed as they were.

Thirty years after the massacres, in 2013, it seems that at least the victims and their families will recover some dignity and memory.