A referendum was held in Croatia on Sunday, 1 December 2013, in which Croatian citizens voted on whether or not marriage should be defined as a legal union between a man and a woman in the country's Constitution. Rallies were held on Saturday, November 30, and previous days in Zagreb and on social networks to oppose this definition. An image by an anonymous author that was widely circulated on social networks throughout the month of November 2013, prior to the referendum; “December 1, 1955. Rosa Parks refused to stand up from a bus seat reserved for whites. What will you do on December 1?”

This referendum is Croatia's third since the country gained its independence and has been a hot topic in media, on social networks, as well as among the country's politicians for several weeks prior to the vote. The proposition was brought forth by a citizens’ association dubbed “In the Name of Family” (“U ime obitelji”), who gathered 700,000 petition signatures for this proposition, and was supported by conservative political parties and the Catholic Church in Croatia.

The association, conservatives, and the Church continuously promoted their campaign for citizens to vote in favor and recent polls showed that most Croatians support introducing this definition of marriage officially into Croatia's Constitution. Some users and media reported that, on the morning of the referendum, Catholic churches across the country were telling church goers that it is their duty to go out and vote in favor of the change. Almost 90% of of Croatia's 4.4 million population are Roman Catholics. James Ker-Lindsay, a senior research fellow in Southeast European politics at the London School of Economics, tweeted:

In churches across #Croatia this morning people being told it is their religious duty to oppose same sex marriage http://t.co/5JTizBlYN3

However, the conservatives’ proposition seems to have flushed out a movement of citizens against this proposition, as social media, online media and several protests by gay or equal rights supporters have flooded the Internet in recent weeks and, in particular, over the weekend of the referendum. Some readers may misunderstand the hashtag #protiv (#against) often associated with gay marriage and LGBT rights in Twitter and Facebook messages from Croatian users these days, but they are in fact expressing their stance against introducing this definition of marriage into the country's Constitution. Among politicians, this liberal side of the vote was led publicly with both Croatia's President Ivo Josipović, Prime Minister Zoran Milanović, and Minister of Foreign Affairs Vesna Pusić calling on citizens to vote against the proposal at the referendum.

Ivo Špigel, a serial entrepreneur from Zagreb and columnist for Forbes Croatia, said:

Mornin'! A beautiful, sunny day – just right to go and vote against the referendum, and *for* human rights of our gay sisters and brothers

No country,city,community or village is exempt from same sex love. I cannot comprehend a referendum 2 ban same sex marriage.#protiv #Croatia

After the polls closed on Sunday evening, local media reported that the headquarters of the “Protiv” (“Against”) movement were quoted as saying:

'We hope that we mobilized everyone who supports human rights' #referendum #protiv http://t.co/covOy2KGj8

The day before the referendum, the association “In the name of Family” denied media accreditation [sr] to their headquarters on the day of the vote to some media who had provided coverage of the “Protiv” movement. Namely, Croatian dailies Večernji list and 24 sata, as well as RTL television were denied access to report from the association's headquarters. Following this decision, most Croatian media decided to support their colleagues and boycott the association's headquarters and media statements on the day of the referendum. Twitter user @markopadovan commented on the matter after the polls closed:

The #Protiv movement seems to have received plenty of support from Croatia's diaspora as well but, with the vast majority of Croatian members of Parliament and citizens allegedly supporting the change to the country's constitution, it is difficult, if not impossible, to predict what the results will be. Helena Kos, a young Croatian expat living in Berlin, tweeted hopefully:

If the results of the referendum are positive and Croatian citizens decide to define marriage exclusively as a legal union between a man and a woman, Croatia will de facto be the first European country to officially ban the possibility of gay marriage in the long-term.

Preliminary results of the polls are expected after 10 pm CET on Sunday, December 1, or the following day. At the time of writing this post, some 40% of ballots have been counted, with the majority in most cities showing over 60% of voters voting in favor of the amendment to the Constitution. One user, Hamide Morina, tweeted: 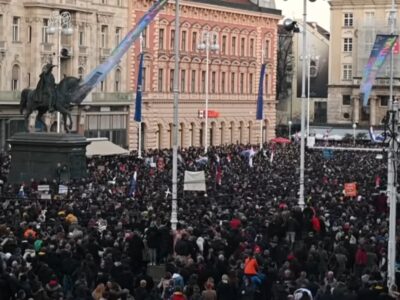 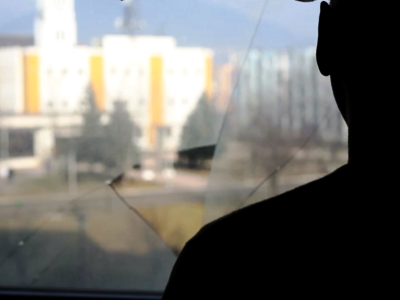