Moroccan Adolescents On Trial for Kissing in Public
Photocredit: Facebook

Three Moroccans teens were arrested on October 3 in Nador in the “Rif” region of Northeast Morocco. The arrested teens were a 15-year-old and 14-year-old couple and their 15-year-old photographer. Their crime was posting a picture of the couple kissing outside of their high school on Facebook. In Moroccan law, this could be translated into violating “public decency.”

The Rif mountainous region is known to be an über Muslim conservative region within a conservative Morocco. Such daring public photographs may shock the public. Another public kiss stirred this violent reaction from a standby witness.

The angry man in the video shouts a slur at the young couple calling it disrespectful to do such acts in a Muslim country.

The arrest immediately triggered a public uproar from fellow Moroccan netizens and social media users worldwide. #Freeboussa, free kiss in Arabic, has been the new social media buzz for a week now since the arrest.

The story has been covered from North America to New Zealand, skipping through the Middle East.

The charge created a furor not only on social media under the hashtag #Freeboussa which translates (from Arabic) to Free Kiss; Also, several Moroccans created social events to protest by daring authorities to kiss in public. Young Moroccans staged a kiss protest last Saturday [October 12th] in front of the kingdom's parliament in Rabat.

The original Facebook event has inexplicably disappeared since Sunday, October 13. 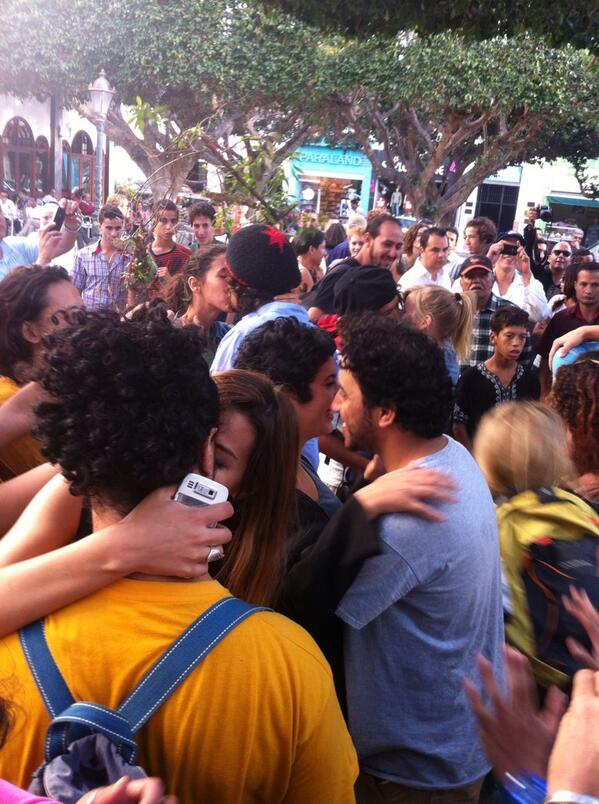 Parisian Moroccans staged in their public protest last Friday during the same day as the scheduled trial in Nador at the Moroccan Embassy.

“Generation Active“, a community development organization launched by young Moroccans, started a petition aiming to collect 10,000 signatures. The organization doesn't state its goals once the object will met, but such a petition will sure stir more reactions and debates online. The petition has only gathered for now 2,791 signatures (28%) so far.

These young people should never have been detained in the first place – there is no imaginable reason why expression of this type ought to result in prosecution. Launching a judicial investigation into a complaint about an act as benign as teenagers kissing is ridiculous. It should be dismissed out of hand.

Many other netizens flocked to the internet to post other symbolic photographs to express their rejection of putting the young people on trial for a kiss.

This is how they want Morocco.. #FreeBoussa

Marrakech resident, Anas Oulmidi, tweeted a picture of two young children also kissing in public surrounded by friendly, smiling faces as a contract to a judicial trial and risk of imprisonment.

Posted in June “in 10 years time, the situation will change (in reference to the teenagers’ case). It is finally true #alas #FreeBoussa #twittoma

Those teens were from Nador. Socioeconomic and political marginalization has an embedded history there and is a huge factor. #FreeBoussa

Kiss-in certainly serves to disrupt. Though let's not discount political & socioeconomic reasons for why the teens got arrested. #FreeBoussa

Moroccan Sheriff talks about the subject on his YouTube Channel. He makes a point that Moroccans are often accepting of non-Islamic norms as reality, but are not willing to defend these liberties publicly. In fact, they might turn against these norms all of the sudden. Moroccans have the pressure to conform. Sheriff also advances in his video that Moroccans consume 13 million liters of alcohol annually. Morocco is one of the biggest exporter of hashish worldwide, with an amount of exchanging doubling that of the kingdom's tourism revenues.

This isn't the unique case of Morocco. The same has been noted in neighboring Tunisia.

What I understood from the Kiss-in action in #Morocco and the reactions on social media is that we need a culture of normalization between individual freedoms and the public. Many Moroccans do have sex without marriage and drink alcohol… and as long as all is being kept in the dark, then it's alright. What a schizophrenic and sick society!

As for the Moroccan government and the King, they asserted the importance that judiciary be and remain independent from governing authorities.

Following this social pressure, the regional Nador persecutor ordered the release of the teens on bail. The trial was scheduled last Friday. The final sentence is now expected on November 22 in order for “an inquiry into the social circumstances of the teenagers,” their lawyer said, according to international news channel France 24.