About 700 Catholic leaders gathered for a candlelight vigil in Seoul [ko] to protest the state spy agency's interference in the presidential election.

Two hundred Catholic priests and 500 nuns in their vestments, together with civic groups, protested at Seoul Plaza on September 23, 2013. A total of 5,000 participated in the demonstration which took the form of Mass (police estimate below 2,000), and it is the first time [ko] in recent decades that the Catholic Church as a group has organized a large-scale demonstration.

Back in mid-August, a little over 4,500 clergy members gathered at Sogang University, the alma mater of the current President Park Geun-hye, to release a manifesto that calls on the president to investigate and apologize for the spy agency scandal. Prominent citizen journalist Media Mongu posted a YouTube video of the scene.

A Catholic priest (@ngo7979) and Nun Juliana (@nun1004) tweeted photos of the protest with comments, as seen below:

We can no longer stand idly by while our democracy is being harmed. I want to say thank you to all of those who participated in today's Mass calling for the National Intelligence Service (NIS) to disband and for the restoration of our democracy. Please stay with us till the end.

We will stand together till truth and common sense prevail.

We see Catholic priests at the Plaza.

This is the scene of 300 clergy members entering the demonstration place during the Mass at the Seoul City Hall Plaza.

One of the nation's beloved bestselling authors, Gong Ji-young, tweeted a photo of the rally and wrote a commentary [ko] about the long history of the Catholic Church functioning as a refuge for democracy. For instance, back in 1970s and 80s when two dictatorial regimes ruled the country, Myeong Dong Cathedral in the heart of Seoul became an iconic bulwark of the democratic movement by hiding and defending activists.

The emotion cannot fully be delivered through the camera lenses.

@congjee: Park Jong-chul's torture and death is also a case disclosed by a Catholic priest. A memo by him [reporting Park's death] sparked the June Democracy Movement [in 1987] RT @tgs432004: <breaking news> Catholic clergy's statement contains a clause that ‘there is a suspicion that the [presidential election] voting tally has been manipulated even before [people cast votes]’. It is the first time the Catholic Church has brought up this election manipulation issue.

Protests against the NIS scandal have continued for over four months now, and religious groups who usually remain silent have joined one by one – starting with the Catholic Church, several factions of Protestant Church, and Won Buddhists. Net users have tweeted comments on why religious groups are taking action. One tweet read:

The reason why Catholics had to take a stance is because neither of the major players, such as the political parties and the Ministry of Law, who are supposed to take the responsibility for this NIS situation, have functioned. – The Board of Directors of the Catholic Human Rights Committee, Lawyer Kim Hyung-tae 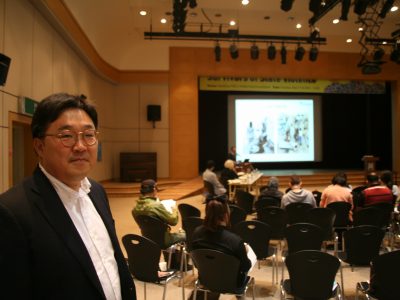 Democratization in South Korea and the legacy of the Gwangju Uprising