Montenegro's first Gay Pride Parade ended in violence instead of tolerance with clashes between police forces and anti-LGBT protesters in Budva resulting in arrests, injuries and, finally, the evacuation of parade participants by boat because police forces could not guarantee safe passage for the participants through the city center.

Only about 40 people were part of the parade itself on July 24, 2013, but of about 2,000 people gathered along the parade route, some 500 actively and physically attempted to stop the event, according to Montenegro's Police Department [sr].

Some, like Mihail Efremov, commented on what was happening at the parade at the time on social media:

While Montenegro has had fairly liberal laws regarding LGBT matters since 1977, then as a part of the former Yugoslavia, LGBT and other non-conventional lifestyles are often frowned upon in everyday life and society. In November of 2012, Montenegrin Deputy Prime Minister Duško Marković announced that the government, however, would consider some form of legal recognition of gay marriages.

Netizens from the region and the world, as well as many mainstream media channels, reacted the day after to the incident that took place yesterday in Budva, one of the most popular tourist destinations on the Adriatic coast. Twitter user Jaz commented and posted a video of the event on Twitter:

Owners of cafes in the old city of Budva even called in a priest to purify the plateau where the Gay Pride Parade had passed. The clergyman who performed the ritual, Father Boris Radović, stated for media that “This was not a pride parade, but a parade of shame”, causing mostly ridicule and contempt from many social media users, like this tweet from user @talambasakobasa:

Nenad Memić, a journalist and linguist from Sarajevo now living in Vienna, added on Twitter:

After the #LGBT parade in #Budva, a local priest consecrated the site: “I pray for the protection of #Montenegro from illness and devil”.

On Facebook, under hashtag#Montenegro, many reactions can be seen, the vast majority of which condemn yesterday's attacks on the parade and call for more tolerance for the LGBT community in Montenegro.

Perhaps this tweet from freelance journalist Alex Hoegberg sums it up best:

The good news is #Montenegro had its 1st #GayPride parade. The bad: the anti-gay crowd was 5x bigger than the parade. http://t.co/pjogFhXEbR 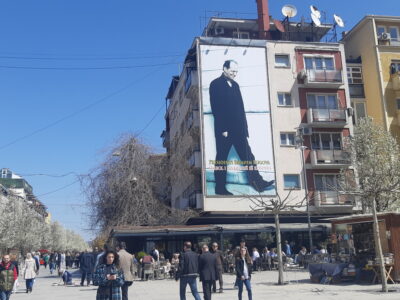