Gulnara Karimova, the upwardly mobile daughter of Uzbekistan's aging “President for Life”, Islam Karimov, celebrated [ru] her 41st birthday in typically decadent style on July 8. But as she enters mid-life, there are still few clues as to what job titles lie on the horizon for the woman known as Guli, Googoosha, Dr. Karimova and The Dictator's Daughter.

Karimova is certainly the most influential woman in Uzbekistan and most probably the richest. According to fergana.ru, she and her younger sister, Lola Karimova are among the 300 wealthiest persons living in Switzerland, where Gulnara officially works as Uzbekistan's ambassador to the UN. While the people of Uzbekistan live in poverty and migrate to Russia in search for bread, Gulnara is thought to have bought a house in Switzerland for $18 million in 2009. A leaked US diplomatic cable called Karimova “the most hated person” in her native country, but as her Twitter accounts @realgoogoosha and @gulnarakarimova attest, she has plenty of well-wishers too.

Gulnara holds a Masters degree in Regional Studies from Harvard University and a PhD in political science from the University of World Economy and Diplomacy in Tashkent. The eldest daughter of the Uzbek President – he has no sons – has held several ambassadorial posts, organizes cultural events through her organization FundForum, and is tipped as a possible successor to her 75-year-old father.

The last few years have also seen Karimova's social media presence mushroom. Her Twitter handle @realgoogoosha is mainly a PR account for her pop singer identity (Googoosha…..poet, mezzo soprano, designer and exotic Uzbekistan beauty. From her desire for self expression came her poems. From her poems came the music) but @GulnaraKarimova sees her engage with both fans and critics directly, as well as promoting her perfume lines. Image posted via @GulnaraKarimova with thanks for her followers’ birthday wishes.

Many Uzbek Twitter users appear to view Gulnara as a person that brings hope and light into their daily lives. Consequently, as Gulnara hit the big 41, she was showered with birthday greetings on twitter.

It does not matter where we are or what we are called, we are all united due to Her, Happy Birthday @GulnaraKarimova our sunshine!

Today's holiday is not just yours, but ours as well. Today is a celebration for us all!!!

May your name get to the golden pages of the history of our motherland! Be always healthy! Happy Birthday to you!

Star of the East @GulnaraKarimova I congratulate you from the bottom of my soul. I wish you the very best, happiness in life, health and luck!! I will always love you!

Incidentally, @vafodorxuja may hold true to that promise. The Twitter user, a young medic, also has an Instagram account devoted to remixed pictures of Karimova and photos of his room, plastered in print outs of Uzbekistan's “First Daughter”.

Thanks to All, who celebrated my birthday with me, with your kind-hearted tweets and messages! Huge reverence for your gifts and flowers.

@Djava official, probably the biggest rival to @vafodorxuja in the Karimova fan stakes, promoted [ru] the idea of replacing profile pictures with a Twitpic birthday card to Gulnara [ru]:

Lets make a small present for the G.K. Put this picture on your profile page. Please ReTweet! But no-one can accurately predict where Gulnara Karimova, a friend of Gerard Depardieu and Sting, will be when she reaches 51. According to Wikileaks, she is viewed as a “robber baron” in Uzbek entrepreneurial circles due to her ruthless acquisition of any local business she happens to like. Given the enemies she has acquired over the course of the country's two decades of independence, it is unclear whether she could become Uzbekistan's next president, although she did not rule such a possibility out in a heavily scripted interview with publicist Peter Allman.

On the Registan blog, a visitor called Zokir highlighted the closed nature of modern Uzbekistan, responding to an article titled Gulnara Karimova: Is she ready to be the next President of Uzbekistan? in the following way:

The problem with the analysis above is that it is mostly based on the information one can get from the outside of the country. Internet. We don't know much about the many other actors who would influence a possible political change. We can only speculate.

The arts and fashion shows, as well as charity and sports activities and concerts have won not few Uzbeks’ hearts. Nevertheless, many ordinary people in Uzbekistan see her as a personality that changes the image of Uzbekistan from a rusty post-Soviet murky land to something new. She is very modern, Uzbeks say she is a person that has lived and been abroad, so she represents also new way of thinking and doing of things, has a more open mentality, at least that’s what many Uzbeks assume. Look at the poor Ministry of Culture in Uzbekistan, whose ministers do not stay long in their positions (some are even criminally persecuted), because their work is not even a close match to the scale of FundForum activities and projects it is pursuing. Moreover, the fact that she is a woman (for a politician a good looking one, indeed) could help her in showing of this new image of Uzbekistan to the outside world as a non-authoritarian, non-despotic and rather softer and younger and a more modern fresh leader. 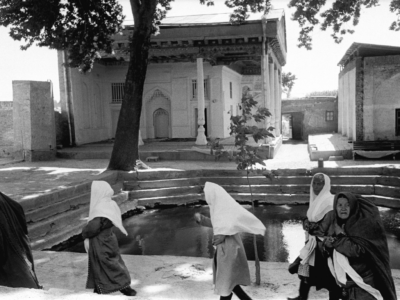