As tensions surrounding elections slated for November continue to poison the political mood in Tajikistan, a video of President Emomali Rahmon singing and dancing at his son's wedding has gone viral, giving opposition figures yet another reason to criticize the excesses of the ruling family and the Tajik authorities yet another reason to block the video-sharing platform YouTube. The wedding took place in 2007, but the video was uploaded to YouTube on May 18, 2013.

Considering some of the things that have been happening to journalists and opposition figures in Tajikistan in recent months (see Global Voices coverage here, here and here) Rahmon's tone-deaf vocal performance was hardly a heinous crime. But after a well-known Tajik exile Dodojon Atavulloev released “Tajik Disco Dancer”, a clip showing extended footage of the wedding accompanied by political commentary, lively debates ensued among the country's online community. Tajik authorities cut access to both YouTube and the independent Central Asian media channel K+ between May 18 and May 27. Rahmon (left) at his son's wedding. Screenshot from video uploaded by PolitikTJ

Footage of the wedding was originally shown on K+ prior to being published on YouTube. Currently, a YouTube video titled “Drunk President of Tajikistan Sings a Song”, uploaded by the user politiktj, has close to 200,000 views, despite the temporary block on the platform inside the republic.

The most popular comment under the clip read [ru]:

Atavulloev heralded [ru] the arrival of the footage onto the internet with a typically mischievous post in the public Facebook group Platforma:

To all! all! all!
Right now and for all time, is the reportage of a wedding, where President Rahmon himself sings beautifully and dances vigorously. The movements and the voice of the chief of nation are accompanied by the commentary of your most distinguished choreographer of the Grand Theatre of Danghara province – Dodojon Atavulloev

Now based in Hamburg, Atavulloev's eccentric criticisms of Tajikistan's president has left him with a contested reputation among his fellow citizens. His long standing rivalry with Rahmon dates back to the 1990s and as head of the political movement “Vatandor” (Patriot) he has been [ru] a target of several assassination attempts.

Besides comparing the president to the lead actor in the Indian movie “Disco Dancer”, he also points out the lavish nature of the wedding itself, which contradicts a national law restricting numbers of guests at weddings and the duration of nuptial celebrations.

Online observers of the Rahmon family's happy day were thus divided into two camps: those who consider Rahmon as showing normal human emotions by expressing joy at his son`s wedding, and those who find the dancing, singing and presumed intoxication of the president inappropriate for a Head of State and leader of a predominantly Muslim country.

He [Rahmon] is a normal man, dances during his son's wedding like all others… Those who have been to a Tajik wedding at least once know, that this is normal, all men dance on a level with women. Well done, Emomali Sharipovich – he has not yet forgotten how to have fun.

Tajiks are dying in Russia, and they are dancing like women!

The YouTube user TheFreirMann also voiced [ru] his upset with the behavior of the president:

Shame on such a government, the people are strewn across other countries, but [the government] are fattening themselves. Their only road is the one to hell.

However, many other reactions were forgiving. On the ferghananews web site, Otlichno comments [ru]:

Right, what's wrong with it?! He is also a human being like all of us! And his dancing is not bad!!

Twitter users were also impressed with Rahmon's moves, although several made the argument that they were best enjoyed without audio.

Since it's #Tajikistan day, here's President Rahmon murdering some poor song at his son's wedding (& getting down!)

@eTajikistan gave thanks for small mercies:

Well, at least the emperor had his clothes on … (thank god!)

But as political tensions continue to brew in Tajikistan, a sense of humor can be a dangerous thing. At the end of his commentary, Dodojon Atavulloev seemed to be inviting another attempt on his life by suggesting [Taj] tongue-in-cheek that he had bribed a highly-placed presidential relative in order to obtain the video:

I want to express my gratitude to the TV and Radio Committee chairman of Tajikistan, Asadulloh Rahmonov. Although the price was quite high, he provided this video to our companions so that we could share it with you. 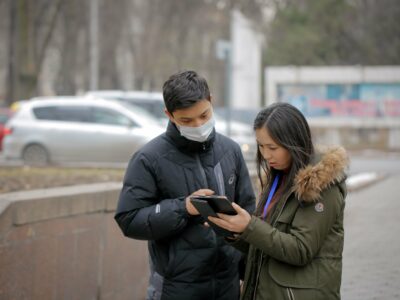