From Guinea to Italy to France and Back: An Interview with Blogger Abdoulaye Bah

Global Voices author and translator Abdoulaye Bah, originally from Guinea, is a retired Italian citizen who has worked for the United Nations. He splits his time between Rome and Nice and has collaborated [fr] with GV since December 2008, having contributed to thousands of written posts and translation in French as well as a considerable number of posts [it] for the Italian group and some more in English.

Bah also runs his own blog, the Konakry Express, where he writes about Italian and African politics. His latest post unfortunately details [fr] his recent encounter with racism in an Italian restaurant in Nice in which a man roughly shoved him out the door of a restaurant, an incident he is speaking to anti-racist NGO SOS Racisme for help.

Before that terrible incident, we had the opportunity to speak with Bah about his life, from his experience hiding in a bathroom to enter Italy without the proper papers, to his marriage in the Vatican, from his foray into cinema to his multi-belief family.

Global Voices (GV): You are originally from Guinea Conakry. When did you arrive in Italy? How would you describe your experience of arriving clandestinely in the country?

Abdoulaye Bah (AB): Precisely last April it was 50 years since I first arrived in Italy, in Florence, to study. However, it wasn't then that I arrived clandestinely in the country. Nevertheless, shortly after my arrival, my documents expired and I was faced with the experience of being “sans-papier”. The life of a student without a scholarship is difficult, however the Italian police didn't employ all the xenophobic measures that they use today.

Despite the help I received from many friends, I experienced hunger to the point where I sat my first university exam in a state of dizziness. Luckily, the Archbishop of Florence, H.E. Ermenegildo Florit, under the recommendation of Mayor Giorgio La Pira, offered me the possibility to eat at the charity Caritas’ canteen and sleep at the homeless shelter [it].

GV: So when did you illegally enter Italy?

AB: It happened after the end of my studies in Florence, in 1967, just after obtaining my diploma in statistics. I continued with a specialisation course, then I went to Paris where I wanted to work and save up to buy a ticket to return to my country. When my father found out, he came to find me and advise me against returning to Guinea because the dictatorship had become more merciless, with tens of thousands of arrests and massacres of innocent people, particularly among the academics of our ethnicity.

Not having any documents, it was not easy to obtain a visa to return to Italy. I took the train from Paris to Rome the day after Che Guevara's death, 9 October, 1967. Arriving on the border at Ventimiglia, I instantly felt the police controls, I went into the bathroom leaving the door open and clung to the partition above the toilet cubicle. When the police agents entered they looked around without noticing me and closed the door. And that's how I managed to re-enter Italy.

A priest who had just founded UCSEI [it, Ufficio centrale studenti esteri Central Office for Foreign Students] took me on as a writer for 20,000 lire a month, with which I could pay the rent. I also managed to find extra activities to earn a little more. I summarised and translated scientists’ biographies, in particular for the Pontificia Accademia delle Scienze [Papal Academy of Science], and later I worked for the IRI [Institute for Industrial Reconstruction] as a public relations consultant in their office for international co-operation. AB: In Guinea, religion is practised in a tolerant manner. From a young age I experienced a lot through contact with my grandfather, who was an important religious leader and died at Mecca. I followed many of his sermons, full of compassion. After secondary school my father paid for my studies at a school run by priests, the best in Guinea. Given the environment in which my personality developed, different religions have never been a problem for me.

In 1969, when I met my soulmate and we decided to marry, I couldn't obtain any documentation from my country. I was living illegally in Italy. I couldn't supply complete documentation to ask for a civil marriage. Father Remigio Musaragno [it], the director of UCSEI, made the proposal of marrying in the Vatican. The instruction on mixed marriages issued on the 18th March 1966 [it] solicited a few guarantees from me – relevant also in my country -, the respect of my wife's religion, the commitment to not obstruct the religious education of our children, and the understanding of the indissoluble nature of marriage contracted in church.

By and large I've kept to my commitments, we are still married and I have not obstructed the Catholic education of our children. Our eldest has even become a Franciscan Tertiary, on this past 7 April, while our second-born is agnostic. I've become a member of the Radical Party.

GV: Would you like to tell us something about your son's experience who became a Franciscan Tertiary?

AB: In all the countries I have visited, my wife and my three children have always practised the Catholic religion. Furthermore, in our house we have always received priests as much as in Addis Abeba, my first place of work for the United Nations, and in Vienna, where we lived for a longer time.

In Vienna we tried to teach our children about the Muslim religion as well, in order to allow them to choose between Islam and Catholicism. However, teaching Islam is difficult in a European environment because one should learn to read and write Arabic. So we asked some North African students who studied in Vienna to explain the foundations to them.

When our children decided to be baptised, Ahmed, the eldest, didn't want to do it and leave me being the only Muslim follower in the family. We had already explained to him that it wasn't the case because I didn't practise any religion. Only then did he too get baptised. Returning to Rome, to carry out work, he started to attend a Franciscan community and work voluntarily for Caritas, discovering his vocation.

GV: Your relationship with the Catholic Church also includes a small role in Nanni Moretti's film “Habemus Papam“: How did that come about and what role did you have?

AB: That participation was pure coincidence. When the director set about making the film, he needed immigrants of a certain age from all over the world. Unfortunately when filming started I was ill and I only took part in a few scenes. I was close to Michel Piccoli, to his left. I was the Cardinal of Zambia. I've never dreamed of working in film even though I had the fortune of participating in films by famous directors such as Federico Fellini and Gillo Pontecorvo in the 1960's in the Cinecittà and De Laurentiis studios. GV: How did you get involved with Global Voices? And the blog Konakry Express [fr]?

AB: One evening in December 2008, by then I had retired, to avoid arguing with my wife about what to watch on TV, I started to search on the Internet for a voluntary activity I could undertake. Among the sites I came across was Global Voices. I read a few posts and liked them. Immediately, I contacted Claire Ulrich, the person in charge of the French group and I started to partake.

I didn't have any blogging experience beforehand. I didn't even know what Facebook, Twitter, netizen, citizen media, blogs or posts were. My only previous activity had been the creation of a forum for the victims of the dictatorship in my country. I became a blogger thanks to the patience of Claire Ulrich, who helped me create Konakry Express [fr], a blog designed to broadcast information of the grave violations of human rights that occurred in Guinea on the 28th September 2009.

GV: What relationship is there between your activity as a blogger and your involvement in politics with the Radical Party?

AB: I experienced the 1968 protests in Italy, I followed or took part in many of the youth protests for the decolonisation in Africa, the fight against Apartheid, condemnation of the Vietnam War, the fight against segregation in the USA. The topics which were at the forefront for the Radical Party in Italy could not but engage me: the fight for the rights for abortion and divorce and against world hunger. It is also thanks to the radical initiatives which arose in the 1990's with the creation of the International Criminal Court, with the discussions about suspension of capitol punishment worldwide or the successes against female genital mutilation.

My sensitivity towards human rights is the fruit of the experience faced in my country and during the peace missions in which I participated, in places where these rights were being violated, such as Cambodia, Haiti and Rwanda. In my blogs, I try to write or translate posts on these topics which are in my heart.

GV: Speaking of which, what is your opinion of the situation in Guinea Conakry today?

AB: In 2010, Alpha Condé, a former academic professor of rights at Sorbona, was elected as president. Many citizens expected improvements but, unfortunately, he is the worst president the country could have had so far due to the rifts his politics are creating among ethnic groups. In his government, there are people accused of crimes against humanity, not only by international NGO's or the UN, but also by Guinean justice, and yet they maintain the same positions of responsibility which they occupied when they committed these acts or they have even been promoted. They should have been able to have elections a few months after the presidential elections but there is no common ground of understanding between the government and the opposition. The future doesn't look promising. [Read this previous interview [it] with Abdoulaye for more on this topic.] 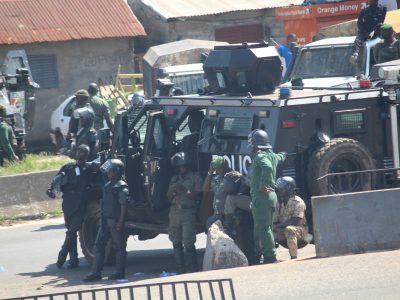