Environmental protection has become a dangerous area of public activism in Russia—at least where industrial pollution is concerned. This is because eco-activists often directly oppose regional business interests, who sometimes react with force. A case in point: on May 9, 2013, unknown assailants attacked and severely beat an eco-blogger from the mid-sized industrial town of Pervouralsk (located 40 km from Yekaterinburg, in the Ural Mountains). The blogger, Stepan Chernogubov, claims that the assault was in retaliation for the publicity he is creating over a local chrome manufacturer dumping waste into the picturesque Chusovaya River (see archival photo below). A cliff on the Chusovaya River. One of the color photographs made in 1912 by Prokudin-Gorsky. Public domain. Wikimedia Commons.

On May 4, 2013, Chernogubov got a tip-off about an illegal waste dump making the river turn “bloody,” and went to check it out and take photographs. What he found was a pipe leaking orange chemical sludge into a nearby pond, which overflowed into the river itself. Chernogubov described [ru] the experience on his LiveJournal blog:

I could feel a strong chemical smell, which created painful sensations in my nose and throat. […] The source filling this chemical lake, as it turned out, was a rotten pipe. Perhaps it burst over the holidays, but likely it was always like this. 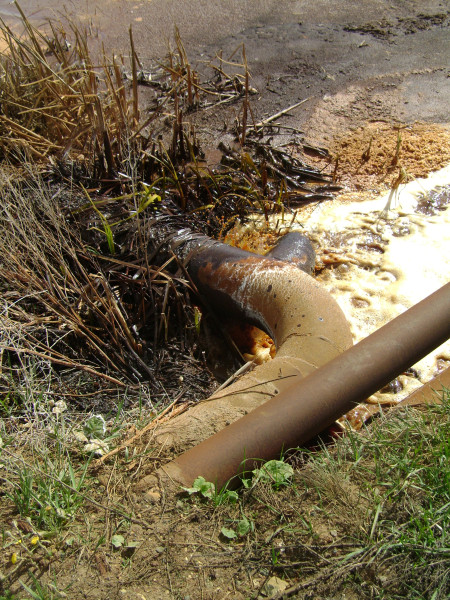 Orange chemicals flowing into a pond near Chusovaya from a burst pipe. Photograph from Chernogubov's blog.

Chernogubov's post was re-blogged [ru] on Echo Moskvy by local economist Alexander Anikin. The factory in question, “Russian Chrome 1915 [ru],” did not take lightly to such publicity. When Chernogubov returned to the dump site the next day (accompanied by a group of environmentalists from Yekaterinburg) to take chemical samples, they were met by private security guards who tried to prevent them from touching the water [ru]: As we suspected, they were creating obstacles for taking water samples. […] Later, after trying physically to force us to give up the collected samples, these people (who said they were security staff from the “Russian Chrome 1915″ factory) finally backed off when I warned them that I might spill the sample on their hands, face, and body.

Local police next detained Chernogubov and his entourage after the head of the private security group reported them for “stealing” the water samples, but the authorities soon released everyone. In the same post [ru], Chernogubov alleged that one of his fellow environmentalists was contacted by a local newspaper editor, who asked him not to raise the issue of “Russian Chrome” pollution, since it could harm the mayor of Pervouralsk, who apparently has ties to the factory. Here is how the factory itself describes [ru] what happened on May 5:

[…] unknown parties, numbering 5 people, tried to gain access to the territory of the industrial wastewater neutralization station of “Russian Chrome 1915.” They had with them bottles filled with an unknown liquid.

Chernogubov's troubles did not end with this, however. On May 9, a few days after he caused the stir and reported the incident of pollution to the local police [ru], Chernogubov noticed on a stroll with his wife that at least four men had him under surveillance. (Oddly, he identifies one as an operative from the local chapter of “City Without Drugs,” Evgeniy Roizman's anti-drug advocacy group based in Yekaterinburg.) Chernogubov approached one of these men, and asked why they were following him. What happened next [ru] is chilling:

In response, he hit me in the face, then two more ran up and twisted my arms behind my back. At the same time, the first one […] started delivering direct blows to my head. When I managed to evade their grasp and hit him, the two that were holding me forced me to the ground and started kicking me. […] When I tried to get up again, one of the assailants took out a gun and hit me in the head with the grip. I briefly lost consciousness. […] As a result I have a busted head, with two stitches, and my upper front teeth are knocked out. When local police arrived in response to the fighting, one of the assailants showed them a police ID, Chernogubov says, and the three men were not detained. Chernogubov is certain that his attack was in retaliation for his reporting on “Russian Chrome.” If so, however, the cat is already out of the bag. On May 10, Greenpeace Russia activists collected their own samples from the river, and found [ru] that the chrome content in the water was almost 100 times above the “maximum permissible concentration.” Of course, this fact does not on its own guarantee any sort of result. This is not the first time that officials have cited “Russian Chrome” for pollution [ru], but it continues to operate and pollute with relative impunity. Maybe the assault on Chernogubov will make a difference in terms of inciting public outrage, and maybe someone will get punished as a result. Even in this best case scenario, though, it's hard to see Chernogubov's story as anything but a hollow victory for Russian bloggers and activists.