In Turkmenistan, pop musicians tread a difficult path between carving out a distinctive image for themselves and ensuring they don't fall foul of the state.

Authorities in Ashkabad have never tried hard to hide their preference for a style Radio Free Europe terms “ethno-pop” over other musical genres. But with a surplus of performers in this oversubscribed category, artists have started to draw on foreign influences, both to help them stand out at home and to give them a chance to enter more lucrative markets in Russia and Turkey.

Nevertheless, whether in Turkmen, Russian, Turkish or less usually, English, the most popular topic for Turkmen artists to address is undoubtedly love, with few straying from this tried and tested formula.

The clip below is a traditional song revamped by Dovran Tokgaev, “Suw Almaga Gelmezmi?” (“Will She Come to Get Water?”). The production is fairly poor quality but the clip clearly portrays a shy, old-fashioned courtship between a girl in national dress and a horse-riding man who later serves his country in the army before coming back to claim her. The song was released over a decade ago:

Tokgaev is known for his peerless vocals. One fan, Shirin comments [tkm] under the clip:

Dovran is my favorite singer! Let his voice be healthy!

When not singing about love, Tokgaev's songs tend to be patriotic in tone, such as “Ashkabad [Turkmen capital] – The Best City in the World” [ru]. As such, he presents no dilemmas for the Turkmen government.

But Tokgaev is no longer top of the Turkmen pops, and faces challenges from the likes of Tach, who makes Turkmen teens go crazy. The video clip of Yar, one of Tach's songs, demonstrates [Tkm] the improvement in the quality of music videos over the years, and highlights Tach's slightly more modern approach to matters of the heart.

Yet Tach is not a model Turkmen citizen, having studied abroad, and often sings in English. His followers point out that he shares similarities with Turkish solo artists as well.

One of his fans, eberdiyeva uses [Tkm] a strong Turkmen word to sum up her feelings for the artist:

Another user,TurkmenPlanner, points out [Tkm] that Tach is not a professional singer and makes videos at home on his laptop. This situation is not uncommon in Turkmenistan, where making music profitable is a tall order.

I've seen him live, he is pretty good.

It is noteworthy that this person considers music his “hobby” and writes music, texts, and makes clips  on his laptop during his free time. Tach deserves 10 out of 10.

One undermining feature of the Turkmen pop world is poor copyright laws. Singers are often accused of stealing music or translating texts. Some commentators say this applies to Tach as well.

The guy is cool. Clip is well shot as well…but why is the music not his own..?

These comments were echoed by other watchers of Yar, but TheAynulka disagreed [Tkm] with their criticism:

Listen, he has his own songs; Green Eyes, Girl From Lyon, With a Flower, Let it Burn. It is pity that he writes in English and not many people have heard of this.

Tach is not the only singer to generate mixed press. Ma-Ro, a Turkmen rapper, is another interesting character, and one who has drawn the wrong type of attention from Turkmen authorities. At the beginning of 2011, Ma-Ro was sentenced to two years imprisonment after an initial 15 day detention. At the time, Eurasianet.org's Sifting the Karakum blog wrote, citing the Turkmen Initiative for Human Rights [ru]:

Maksat (Ma-Ro) Karakbayev and Murad Ovezov were summoned to the Interior Ministry on January 28, and sentenced to 15 days of jail for giving an interview to a Turkish TV channel, TMB.

Some speculate that the real reason for Ma-Ro's arrest was the song “Sen Oyan” (“Wake Up!”) that the government perceived as a call for people to resist the state. As Radio Free Europe notes, Turkmen rap singers have been known to miss a beat when it comes to praising their country's Golden Age, choosing instead to focus on the difficult nature of everyday life in the isolated state. But how dangerous were Ma-Ro's lyrics?:

This song is for our friends, yeah , yeah, yeah / The sun sets and stars appear / Hours, days and years pass / You should try to make something remarkable in this world / Because time doesn't wait and there is no coming back / Don't sleep for too long, wake up / And trust only yourself / Life is not easy, so listen to me if you are real, friend / You will cope with all troubles with every breath you take / Every day and everywhere when you feel sad / Let help come to your life / And you can reach your dreams

Fortunately, Ma-Ro was granted amnesty on the Day of the Turkmen Flag in February 2013, having served two years of a five year term, and will now continue advancing Turkmen hip-hop. Singer-government relations have long been a source of discussion for Turkmen netizens. Back in 2011, on the popular platform Ertir, Athena commented on his arrest [Tkm]:

Now even singers are used to limitations/prohibitions. They are in jail for 3-4 months and then they only need to sing one song about the president and they are back again.

Not all of Ma-Ro's songs have a serious political message. In fact, plenty of them are about love and his homeland, themes that meet [ru] with strong government approval. Authorities will no doubt be hoping “Sen Oyan” was a blip.

The rising star of Turkmen pop, meanwhile, is Sohbet Kasymow. Kasymow is often likened to a younger Dovran Tokgaev, and his cheeky, fresh, student style has pushed him to the very apex of the domestic music scene. The clip below is his hit song “Sőỳgi”, which translates as… “Love”: 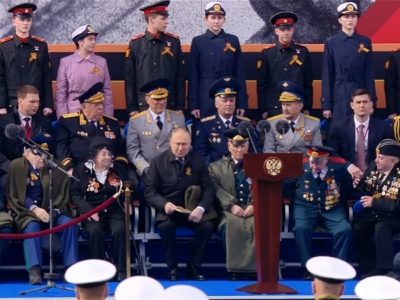