VIDEO: Turkish Police Crack Down on May Day Protesters

Violent clashes between Turkish police and May Day protesters in Istanbul left 25 civilians and 22 police officers injured [tr], including one man who reportedly lost an eye due to a teargas canister and another 17-year-old girl with head injuries who was left in a coma for a short time.

Thousands of people made their way on May 1, 2013 to the city's main Taksim Square, a symbolic location where gunmen opened fire on the crowds there during the May 1 protests in 1977, killing as many as 42 people. This year, the government banned any protests or celebration for International Workers’ Day in the square, citing safety concerns due to construction near the area.

Police shot water cannons and teargas to disperse protesters, who fought back with rocks and Molotov cocktails in some cases. Seventy-two protesters were detained.

The response has been criticized as heavy-handed and harsh. Turkey's main opposition party leader Gürsel Tekin told reporters that police shot teargas into houses, hospitals, and even into an ambulance.

Hürriyet, a Turkish newspaper, published a video [tr] of police aggression toward protesters on its website:

Government officials [tr], however, accused protesters of being members of fringe groups, throwing rocks and Molotov cocktails at police, forcing them to shoot teargas in response. Hurriyet [tr], a Turkish newspaper shared a video of some protesters attacking police forces on its website doing just that:

According the nationalturk.com, opinion on the protesters were divided, with some people not approving of the vandalism against the police, and even some yelling at protesters to “get out, you are not welcome here”.

On Twitter, user Murathan Ceylan (@MurathanCyln) was angry at the protesters:

Is your purpose celebrating May 1st or throwing rocks and Molotovs at police and stores?

You dishonorable people. They tried to kill the police who are trying the protect them! Traitors!

Dilan Alp [tr], a 17-year-old protester, was hit by a teargas canister and fell into a coma. She is awake now and her medical situation is improving.

Although the police department [en] said in statement that she fell down from stairs, and the governor of Istanbul, Hüseyin Avni Mutlu, called Alp a militant and member of a “marginal” group, the video of the incident tells a different story. Here is the video [tr] of that moment:

Reactions were high on social media over her injuries.

Dilan Alp, a high school student, was hit by teargas. Well, she is not a worker, is she? She also wanted to go to Taksim, too. So it is normal to kill her.

Peace and Democracy Party (BDP) congresswoman Sebahat Tuncel (@tuncelsebahat) visited Alp in the hospital. She mentioned that the girl's father is a former employee of Hey Textile, a large textile company that went bankrupt this year and whose former workers went on a strike [tr]:

There are broken bones on Dilan's head and chin, caused by a teargas that hit her on head. His father is a Hey Textile worker. She came to celebrate the Workers’ Day with his father.

Government, with its 40,000 police, kept the construction area in Taksim Square safe, while attacking workers with teargas and nightsticks; Dilan Alp heavily injured.

But to combat the reactions against the police action, the governor publicized photos of Dilan Alp [tr] allegedly holding a molotov cocktail in her hand. He claimed that she was not innocent, and she was injured while attacking police forces.

Alp was not the only one who was injured. Protesters Meral Dönmez, Zafer Yolcu, İbrahim Akal, and Serdal Gül [tr] were all seriously injured and are hospitalized.

Yolcu was hit on the head by a teargas canister, which fractured his scalp, according to reports. Akal lost one of his eyes and is in danger of losing the other, according to his brother Umut Akal's statement [tr].

Twitter user Ali Fırat (@partizan72_) shared a picture of Yolcu in the hospital:

Can there be any price for this? İbrahim Akal injured on May 1 and lost his eye.

@efkanbolac They really deserve to receive thanks! İbrahim Akal lost one of his eyes because of the teargas. He is going to thank them when he is out of the hospital!

Twitter user, Dilan Alatas (@DilanAlatas), mentioned Gül while slamming criticism of Alp, the 17-year-old protester, for being at the protests even though she is not a worker:

@DilanAlatas After Dilan Alp, worker Serdal Gül went into surgery. Will you still say “so, he was not a worker”?

Serdal Gül in a coma too, his family said: “Our child shot by targeted on purpose and got injured from his head” 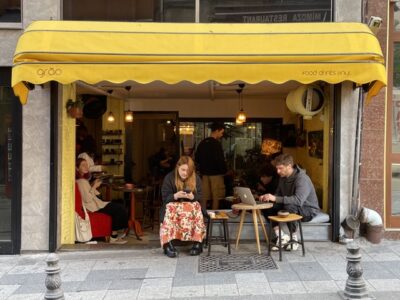