Hackers in Arab Cities: Fab Lab and Tech in Egypt

Sabine is a journalist, Ophelia is a photographer and a videomaker: both are former contributors to OWNI (a Global Voices media partner in France) and are currently shooting a web-documentary entitled “Les hackers dans la cité arabe (Hackers in Arab Cities) about technology, applications, hacker labs and maker spaces, that are blossoming nowadays in the Maghreb and the Middle East. 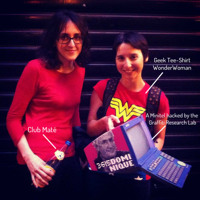 Sabine and Ophelia are currently taking part in the World Social Forum in Tunis (March 26-30). They will speak about “hacking”. In the West, hacking is more or less considered part of a geeky and rather privileged culture. On the other side of the Mediterranean, it is rather the product of revolution, giving a new impulse towards collaborative practices and innovations, spaces that are open to everyone.

Over the next weeks, Global Voices will re-publish and help translate in three languages (Arabic, French, English) excerpts of their journeys and encounters with young open source developers from Algeria, Egypt, Tunisia, Lebanon and Iraq. We begin this series with an interview with Mahmoud El-Safti, co-founder of a hacker space in Giza, Egypt.

Mahmoud El-Safti on the creation of a hackerspace in Giza Mahmoud El-Safty co-founded Giza Hackerspace and Fab Lab Egypt, the first of their kind in Egypt, with both projects located in Giza, in the suburbs of Cairo. This young, smiling engineer speaks with enthusiasm about his faith in hackerspaces/makerspaces.

To listen to the podcast in English click here. Below is a transcript of the interview.

I think starting initiatives like having maker spaces and hacker spaces, where people can gain practical experience and share knowledge and practice theoretical information they have, will have a great impact on society and on the educationnal system, and changing people's minds as well. When people collaborate in a fun atmosphere, not gathering to study for an exam but rather to work on projects they are passionate about and interested in, of course they will make it the best they can. Probably later, a lot of projects to come out of such spaces will be products and start-up companies. In fact, we have open source products, software and hardware, that are currently available in the market that come from hacker spaces et maker spaces.

Text and sound by Sabine Blanc.