Asymptote, an international digital literature and translation magazine, celebrated its second anniversary with a series of events held around the globe with participation from some of the world's best contemporary writers and translators. Among the cities chosen was Barcelona [es], where a recital [es] from some translators and authors from the city took place in Spanish, Catalan, and English on 25 January to present the first edition of the magazine in 2013. Audience at the Inusual Project room. Photo by Alba Calle.

The project came about thanks to a group of entrepreneurs from different parts of the world who shared a love for literature and the art of translation. With this in mind, Asymptote provides readers with excerpts from works in their original language and the corresponding translation. Some even include audio recordings of the translator so that readers can have access to the phonetics of the language.

And that's not all. Apart from literary works, the magazine also has a section dedicated to visual art.

Asymptote was named 2012 Magazine of The Year by 3:am magazine alongside publications including The Times Literary Supplement and London Review of Books. The project's success is owed largely to a long list of volunteer collaborators including authors, translators, photographers, and illustrators.

Yew Leong Lee, the magazine's editor-in-chief, spoke with Global Voices about the project and the event in Barcelona.

After two years, how does it feel to be part of such a successful project?

Celebrating our second anniversary in cities like New York, Berlin, Taipei, and Barcelona has been extremely satisfying, particularly because we met up with readers from all over the place for the first time and we saw the difference between their cultural environments, even though we are a completely digital magazine. This proves that there is a huge demand for literature to be treated as a global phenomenon and not within the individual framework of a single language. Asymptote aims to be the focal point for literary communities, which are always minorities. I'd like to thank my team and also the readers, especially those who helped us to broadcast our initiative and have collected for us in our current Indiegogo fundraising campaign.

Since we've collaborated with so many great Spanish writers (not only from Spain, but also from Cuba, the Dominican Republic, Mexico, etc.) over these two years, we wanted to hold an event to reinforce our link with Spain. Barcelona seemed like an obvious choice because many translations are done there, not only for tourists but also between Catalan and Spanish. We'd like to introduce even more Catalan and Spanish writers to our English readers in 2013.

How was the event in Barcelona received?

It was a great success. There were definitely more than 100 people attending. The programme included both established translators and writers and young promising faces in the world of translation and literature. Some of the writers even tried their hand at one or two translations and shared them with the audience. There was also live music from a swing band who added a relaxed vibe to the event. Many of the guests stayed behind to talk to the authors and thank us for the initiative, as they'd never been to an event like it.

Following the huge success of all the events, do you have plans to do it again in the near future?

It's a possibility, because the public not only gave us a warm welcome in Barcelona but in all the cities where we organised events. It all depends if we have enough support, because we'd also like to go to other areas and bring world literature to local communities and vice versa. The next places on our list are London, Paris, and Tokyo. However, if we get another chance to organise a similar event in Barcelona, we'd be delighted!

Photos of the worldwide event are available on the magazine's Facebook page. You can also keep up to date with the latest Asymptote news on Twitter and Tumblr. 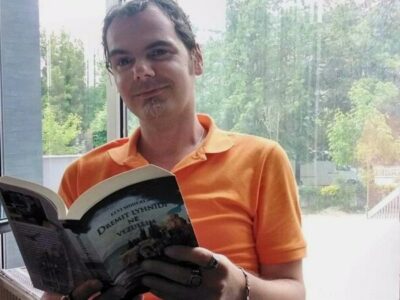