The Japan Kanji Aptitude Testing Foundation announced [ja] that the kanji of the year 2012 is gold (金) at the Kiyomizu-dera temple on December 12, 2012. The annual Kanji of the year announcement began back in 2000 and has attracted the attention of the public every year.

The Japan Kanji Aptitude Testing Foundation explained they chose this kanji to symbolize “milestones” (written 金字塔) achieved this year, such as gold medals for Japan (金メダル) at the 2012 London Olympics, a Nobel prize win by Dr. Yamanaka, the newly opened Skytree in Tokyo, and a solar eclipse (金環日食) observed across Japan.

Many paid attention to the announcement of the kanji, but netizens are not so convinced that this year was glittering in gold. Twitter user @keloinwell shrugs, because the kanji also means “money” in Japanese. 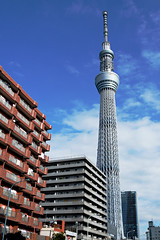 Gold doesn't give me a good impression. [I wonder why] they chose 金 from 金字塔.

The kanji of the year doesn't sound very much like this year. I understand where they come from for the gold medals, but milestone (金字塔) doesn't ring a bell to me.

Some users commented with sarcasm, referring to Kim Jong-un which is written 金正恩 in Kanji [the “gold” kanji appears in the word].

The kanji of the year was announced “gold” (金), the same day North Korea launched a missile.

Let Robots Wrap Up the Year with Jokes

Random kanji of Global Voices Japanese is “hip” or a “waist” according to joke service Shindanmaker. Doesn't make sense? It's meant to be a joke.

A user generated joke web service ShindanMaker automatically generates “your kanji of the year [ja]”. Users can see what the site picks for them based on the user name they enter. The site also generates a “report on the level of your real-life satisfaction [ja] ” and a “forecast of your year-end/new year days [ja]”. How was the year 2012 for you? Global Voices Japan's Lingua team [ja] had three meetups this year. Transactions among Lingua volunteers are very active through emails, but for many new members it was their first time to meet face to face. Global Voices welcomed new Japanese Translation Manager Maiko Kamata and new Language editor Keiko Tanaka. Global Voices Japan team is looking forward to publishing more stories about Japan as well as more translation of posts for a Japanese audience in the coming year.