Mauritanians Find a Voice Online in 2012

Few people know about Mauritania, that African state. Even fewer know that it is a member of the Arab League, thus part of the Arab World.

But too much has happened in 2012 in Mauritania – the latest being the shooting of President Mohammed Ould Abdel Aziz on October 13 and its implication on the internal scene.

Despite the low rate of internet penetration, young people and activists are resorting to social media platforms in an attempt to say: “We exist” and to draw the world's attention to their country.

According to Nasser Weddady, a US based Mauritanian activist (@weddady) “Facebook is at the center of the new e-dissent” in Mauritania, where opposition groups and human rights movements as well as independent activists are expressing themselves. Twitter is also gaining importance among Mauritanian netizens.

Yearning for the Arab Spring

Fed up with a military regime and dictatorship, coupled with dire socio-economic conditions, Mauritanians saw in the Arab Spring, a fresh breath for them.

They seized the opportunity to call for reforms and demand for the end of Mohamed Ould Abdel Aziz‘s rule.

Sit ins, marches, rallies and protests were held by the opposition, spearheaded by the 25th of February Movement [ar, fr].

They were met by brutality and repression by the regime, who naturally support other dictatorships like Syria. Suppression of the protests on May 18. Image from the Facebook page of the ‘youth bloc’ – used with permission

A blog post by Ahmed Jedou explains the state of affairs in the country [ar]:

“Today it is obvious that the military look at us as if we are a ball they are playing with. Our war should be for the establishment of a civil state which fights all the remnants of military rule and French guardianship, through a transitional period, which should be lead by civil society forces.” Photo of a protest held on June 23, 2012. Used with permission from the page “Latest News “ آخر خبرا

The February 25 Youth held a symbolic burial of the Constitutional Institutions on November 12. 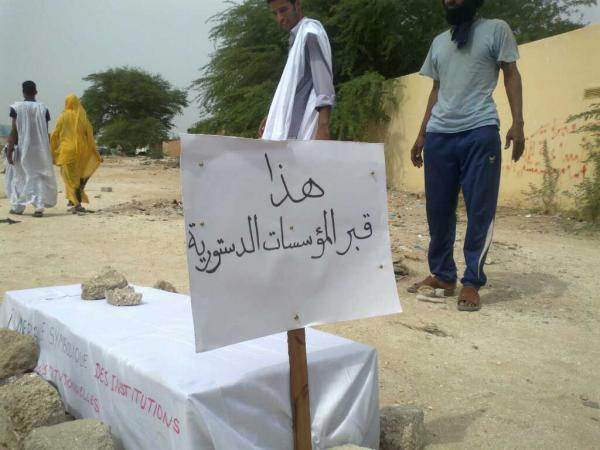 @tahabib: Herein, lay the Constitutional Institutions, May the Lord have mercy upon them

A gloomy record in human rights

The year 2012 was also marked by the arrest of various activists and journalists.

The regime even tried to bribe students so as to convince them to stop their activism.

Almeen Ould Hamadi, member of the executive office of the National Union of Mauritanian Students, surprised everyone. He revealed that Isselkou Ould Izidbih, the president's chief of staff and the former president of the University of Nouakchott, had offered him a job and money to split the union, under the direct supervision of a former member of the same union, Mr Itwal Omar

Mauritanian journalist Obeid Ould Amegn was detained on April 29. His health is said to be deteriorating. But if one is to speak about Mauritania's violation of human rights, then we can definitely not omit slavery. Despite it being abolished by the government since 1981 and considered as a crime in 2007, slavery is still rampant in the country.

On December 10th, Mauritania was elected Vice President of the UN Human Rights Council which outraged various associations and prompted UN Watch to slam that decision. Also, discrimination is a daily fact of life for black Mauritanians.

“It is obscene for the U.N. to use the occasion of Human Rights Day, when we commemorate the Universal Declaration of Human Rights, to elect the world's worst enabler of slavery to this prestigious post,” said Hillel Neuer, UN Watch executive director. According to a recent report by the Guardian, “up to 800,000 people in a nation of 3.5 million remain chattels,” with power and wealth overwhelmingly concentrated among
lighter-skinned Moors, “leaving slave-descended darker-skinned Moors and black Africans on the edges of society.”

Mauritania was once a French colony. Despite its independence in 1960, strong ties still exist between both countries, angering Mauritanians who demand an end to the French guardianship over their country.

Mauritanian journalist and blogger Dr Elycheikh Bah Ahhmedtolba explains the reasons behind this feeling of resentment:

The question of French-dependency exists since the advent of colonization and reached its peak during the so-presumed “independence”, since then there has been a generation living on its rewards. [..] It is our duty as the young generation to, at least, discuss and share ideas about the doubtful positioning of the “Old Political Guardians” within the French negotiation with the military junta about the possibilities of keeping the disappeared Aziz on the top of the state or to push forward another accomplice for the looming war in Northern Mali Mauritania is a country rich in mineral resources.