An apparent Zambian terror group, ‘Tongas Under Oath’ claimed to have killed three Northern Province Bemba people, including a baby. The group, from the predominantly Tonga Southern Province region of Zambia, made their shocking claim in a television news item read on the state-owned Zambia National Broadcasting Corporation (ZNBC) channel, on the evening of September 3, 2012. But the claim soon came under suspicion following newspaper coverage.

The story was carried by two state-owned newspapers, the Zambia Daily Mail and the Times of Zambia. Such stories do not get published without clearance from higher political offices in the land, especially if they are to also appear on national television. This meant that for some, there was no doubt that the Tonga were out to get rid of the Bemba from the province. Hakainde Hichilema, leader of the United Party for National Development (UPND), one of the largest opposition parties, is Tonga. 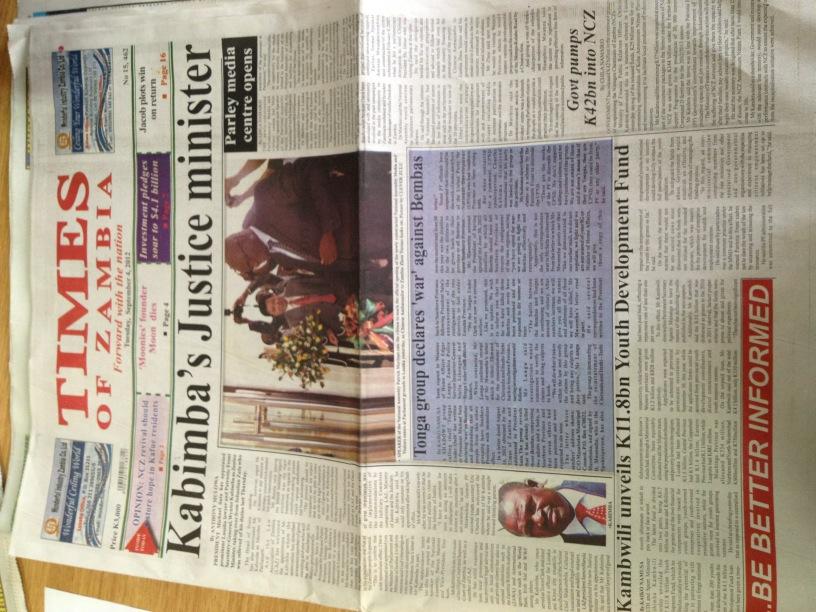 Tonga group declares ‘war’ against Bembas, story as it appears in the Times of Zambia. Twitpic image courtesy of @luchi7.

We the Tongas under oath are now in serious warfare. Like we promised, this is an update. We wish to inform you that so far we have killed three (3) Bembas – 2 adults and 1 baby in Southern Province […]
Our demand is simple – ‘Take Chirundu and Itezhi Tezhi [two districts annexed to Lusaka and Central Provinces, respectively] back to Southern Province’. We gave the 30th of June 2012 as the dealine for all Bembas to leave Southern Province or we be given back our Chirundu and Itezhi Tezhi – you have opted for war-we are going to fight you Bembas effectively and courageously.

To many others, however, the story was not as convincing as it sounded and these people were vindicated when President Sata stated two days later that the letter was possibly authored from the capital, Lusaka.

Commenting on a story on the Lusaka Times in which the opposition accused the Patriotic Front government of being behind the letter, MUWELEWELE wrote:

It appears PF has embarked on a strategy to see to it that all opposition politics are completely eliminated form this country. Then what is the meaning of democracy. Thye want a one team game with themselves being competitors and referee at the same time.This is proper dictorship in modern age. We know how MMD came up with ZERO OPTION up today it still remains a mystry. Arresting opposition leaders on trumped up charges will just make those opposed to the way PF is running public affairs more polorised.Lets face facts as Zambians and allow divergent views. Its health for democracy.

Writing on the Zambian Watchdog, Roderick Mazuba accused the ruling Patriotic Front  of trying to distract people from its failure to fulfil its election promises:

The Zambian people should open their eyes and see what a desperate PF regime can do to divide its people through acts of desperation in the wake of its declining fortunes. The construction of a Tonga fundamentalist group calling itself ‘Tongas on Oath’ is nothing other than the ruling party’s desperation to distract people’s attention from Michael Sata’s endemic tribalism and nepotism. The desperate attempt to link the UPND to the group is an obvious and well calculated scheme aimed at reversing Hakainde Hichilema’s growing popularity in the wake of PF’s tribalism, nepotism and failures to meet the expectations of the Zambians who voted for the PF.

Mazuba, who linked the terror letter to the former arrest and charging of opposition leader Hakainde Hichilema (for allegedly publishing false news in which he told the nation that the PF government was in the process of sending youths for militia training in Sudan), a police search of the UPND headquarters and the incensant accusations of tribalism against the opposition leader, further wrote:

Any reasonable person who has been following the recent developments in Zambia need only to link and not isolate the recent events to understand what is going on. All what you need is to link the recent arrest of [UPND President Hakainde] Hichilema , the search at the UPND Secretariat for seditious materials, the unrelentless tribal attacks targeted at Hichilema while [Defence Minister] Geoffrey Mwamba(GBM)’s interview with Mazabuka Community radio where he accused Hichilema of dividing Tongas and Bembas provides a powerful clincher and lead to the whole episode.

Commenting on the story on Zambian Watchdog in which President Sata said the letter was authored in Lusaka, new age wrote [there are no links to individual comments on this site]:

Public media should face the full wrath of the law. I thought they should be the last to perpetulate [perpetuate] genocide in the nation. What has gone wrong to the public media?. Do they have editors? I want to know why that letter was given the massive space. Its only in [Z]ambia where such dirty letters can be published by gvt [government] controlled media without weighing the conseguences [consequences]. Is our security secure? Why did the public media publish that evil? Cage those evil doers.

Blogger, MissBwalya, delivered a damning verdict on the public media:

I was extremely disappointed that the news editors of Times of Zambia and Zambia Daily Mail chose to print a story that was completely single sourced. They didn’t fact check a single aspect of what was contained in that letter. They have followed this up by printing updates from Zambia Police spokesperson who reports “they are making progress” in tracking down the perpetrators. If it wasn’t a sad indictment on the inefficiencies rampant in our public institutions I would laugh and keep moving.

However, when it’s an issue that has the potential to raise the ugly spectre of xenophobia, it’s no laughing matter.

At the time of writing, no one had come out to claim they witnessed the killing of any Bemba in Southern Province, nor did any one claim that they were missing any relative from that part of the country as a result of the reported terror killings. It was probably a terror plot that never was anyway.