It is a story that has reached all corners of the globe from the New York Times to the China Digital Times – the tragic death of a Chinese supervisor at a coal mine in southern Zambia, allegedly at the hands of striking workers demanding the implementation of the minimum wage which the Zambia government had recently announced.

Collum Coal Mine in the Gwembe Valley area of Sinazongwe is not without history. In October 2010, two Chinese supervisors allegedly shot at protesting workers and injured 11 of them. The two supervisors were arrested and charged with appropriate offenses but the matter was discontinued in the courts of law through a nolle prosequi.

The mine has also had problems with government officials in the past. In 2010, then Southern Province Minister Elijah Muchima described the plight of the workers as sad, saying they were subject to slave wages and worked under hazardous conditions and explaining that the workers there earned between Zambian kwacha 57,000 and 500,000 (between US$ 15 and US$ 100) per month.

In 2006, another provincial minister, Alice Simango, openly wept after seeing miners during a tour of the mine emerge semi-naked and barefoot from the tunnel. Simango, who was blocked from entering the mine by the Chinese, later recommended that it be closed to protect human life.

The latest incident, which left a Chinese supervisor dead, elicited a lot of reactions from netizens on various social platforms, ranging from blaming the government for the abrupt manner in which it announced the minimum wage to blaming the Chinese for taking advantage of the workers.

On one of the spin-off stories of the incident on the Zambian Watchdog, commenter rocktree blamed the Chinese:

CHINA DO THE R[IGH]T THING LIKE RESPECTING US HENCE WE WILL RESPECT [YO]U.GIVE THEM PROPER UNIFORM[S] WHEN U EMPLOY THEM, PROVIDE TEA BREAKS IN INTERVAL [breaks]. PAY THEM WH[A]T U AGREED UPON AT THE TIME OF EMPLOYMENT AND PAY THEM ON PAY DAY. WE NEED RESPECT DO NOT THINK TH[A]T WE R [we are] SLAVES. WH[A]T HAPPENED TO THE CHINESE WHO SHOT ZAMB[IANS] 2 Y[EA]RS AGO? B[E] FAIR AND THINK. U R GAINING MO IN Z AND A ZAMB GETS NUTS SHAME ON U

Kwathu had a different view:

Workers in Zambia are over reacting but I dont them, its because of the PF [Patriotic Front] promises. Its not about Chinese, so many Zambian companies are under paying workers and so insulting Chinese as noted by some bloggers is not correct.

Mind you, Zambia benefits from this investments not only through jobs but the taxes that the gvt uses in the development of nation. The Chinese may sound so evil now because they are here and they have already pumped in billion dollars. Where are the betters investors, the Anglo-American left us when we needed them most, but now from distance they are promising better conditions for workers. Let us appreciate the Chinese, what they are doing is good for the country.

The president of the former ruling party, Dr Nevers Mumba, blamed the PF government for the killing:

[M]any Zambians, including the MMD [Movement for Multi-Party Democracy] feel that the PF government has created a very volatile environment between employers and employees.

The government was quick to assure investors that the environment was still conducive but urged workers and employers in the country to embrace dialogue in resolving their differences.

A reader calling himself Taliban commented the government story:

@hofrench: The death of the Chinese manager in #Zambia occurred at the troubled Collum mine, where Chinese fired on Africans 2 yrs ago.

A number of tweets announced the arrest of a miner over the death:

Leading satirist in Zambia Roy Clarke through his column, Kalaki's Korner, has also weighed in on the controversy by satirizing the whole issue: 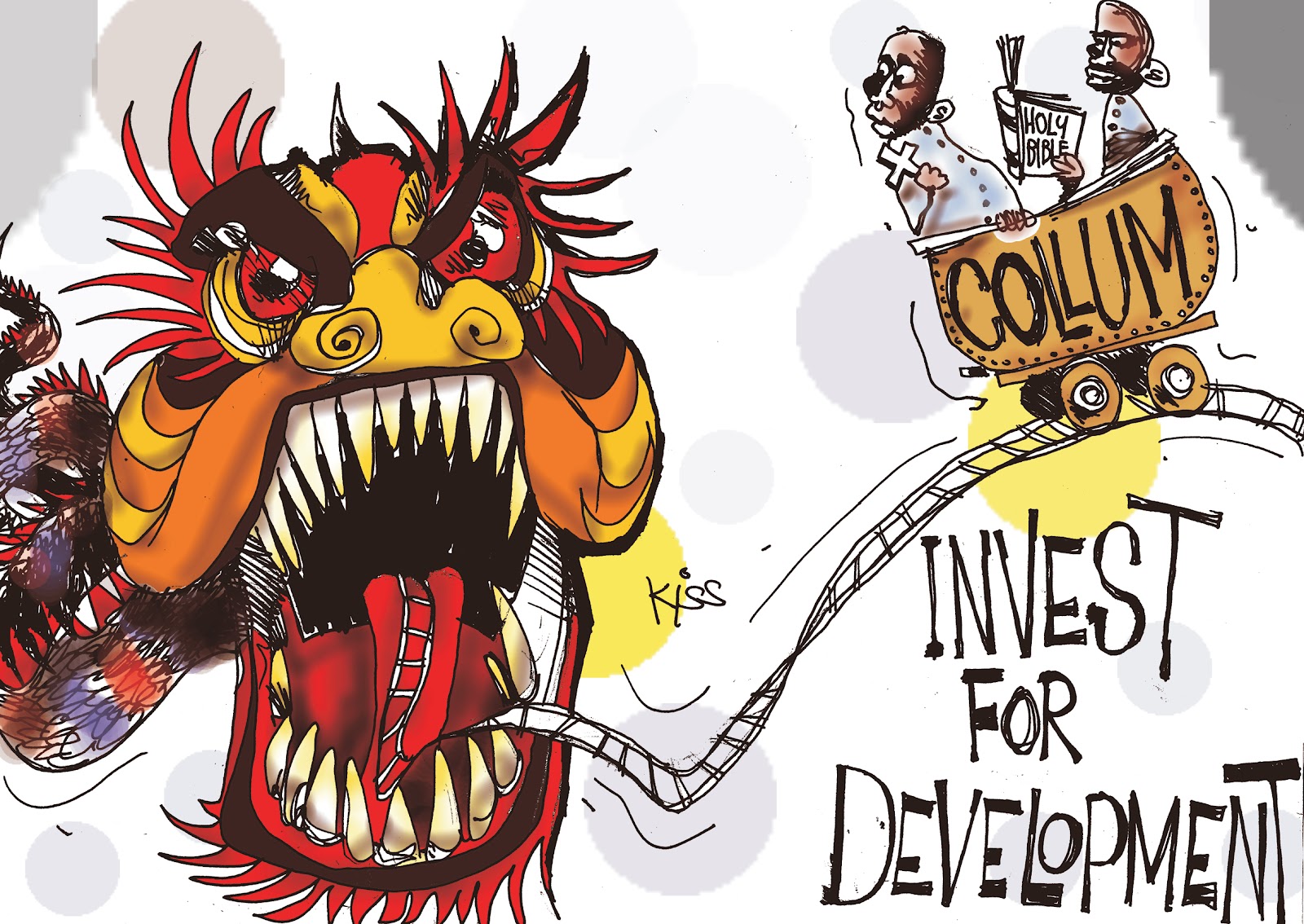 As the picture on our ancient Supersonic came into fuzzy focus, we were presented with two rows of men, facing each other in sullen confrontation. In the foreground stood a line of soldiers, guns at the ready, and pointing at an opposing line of thin and starving workers, dressed in rags. Behind them was an ugly black entrance to a mine, just big enough to take a small railway line down to the depths of hell. Over the top of entrance was written Colonial Mine.