Global: ‘International Relations’ Out of the Classroom Onto the Web

The Internet and Web 2.0 have enabled students to gain greater and quicker access to ‘International Relations’ (IR) Books, courses and information on universities and scholarships  are easily available online. Professor Sanjoy Banerjee, who holds a Ph.D. in Political Science from Yale University and is currently Chair of International Relations at the San Francisco State University, said this when contacted over email:

The main benefit of technological advances (in ICT), particularly the Internet, is that it makes research much quicker. With search engines like Google Scholar, one can find articles and books on topics far quicker and more efficiently than before. Of course, reading and understanding have not become any easier. Still, my students read much more widely, across more disciplines, than I did as a student.

Shahzada Akram, who studied International Relations at the University of Dhaka in the 90's and who is now Senior Program Manager at Transparency International Bangladesh, adds: Home Page of the Department of International Relations, University of Dhaka, Bangladesh

The changes are best reflected in the changed political scenario of the world's one of the most important region – the Arab states through the ‘Arab Spring’, the impact of WikiLeaks on the diplomatic relations among states, live broadcast of all international and national events in both the television and internet, and so on. These have somewhat forced the traditional teaching and theories of IR to bring in changes in the curricula,and the means of teaching. Now the IR as a discipline is a lot web-based (say in case of my university – University of Dhaka). New courses on media and communication focusing IR have been introduced to keep up pace with the current development in ICT. IR has got a new dimension, and is no longer the subject of a few for discussion. Rather it has become more public, and has gained more access among them.

Akram feels that these voices have helped “concepts like ‘soft diplomacy’ gain more ground. The governments now have to be more cautious about their actions/ policies more than ever before.”

On the other hand, too many voices could be adding to noise. Professor Banerjee believes:

Blogs and other social media remain of limited scholarly importance. For the most part, they are not written with scholarly discipline and cannot substitute for academic writing.

The internet is changing the discipline obviously. We take blogging much more seriously than before. I think Walt’s flagship blog at FP changed a lot, brought a lot of credibility, but Drezner was the real pioneer. Now there are some really good IR blogs, like Duck of Minerva.

He goes on to caution that “the real value of blogging is test-driving ideas that ultimately you should work up for journal submission. Blogging is not an end in itself or a replacement for real research.” Screenshot of the IR blog The Duck Of Minerva

In January 2012, Foreign Policy magazine published the results of a survey on how social media and Web 2.0 impact the IR discipline. Daniel. W. Drezner provided an interesting snapshot of the results [pdf] from US respondents on his blog:

The final report of the study, with data from 20 countries, can be found here.

So it seems despite reservations from some senior academics, the role of social media in IR education is growing slow and steady. 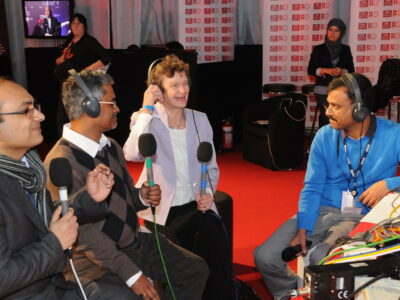