The referendum was a consequence of the 2005 Naivasha Agreement between the Khartoum central government and the Sudan People's Liberation Army/Movement (SPLA/M).

After witnessing the birth of new nation, Heather and Joel argue that after one year there is much work still need to be done:

Perhaps I'm being overly sensitive and demonstrating a heavy bias, but I feel a bit like the mainstream media's coverage of South Sudan's first birthday was a pretty unrelenting torrent of negativity.

I would be the first to call for more criticism and scrutiny of the Government of South Sudan, but can't we have just a little balance on their first birthday celebrations? And where has all the criticism been for the past 7 years since the peace agreement? 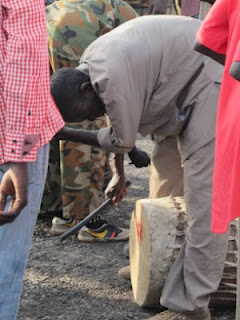 South Sudanese beat the drum so hard in joy until his hands were bleeding. Blood marks can be seen on the drum. Photo courtesy of africanfaders.blogspot.com/

Tom Murphy usefully organizes a Twitter debate about the framing of South Sudan's independence. Semhar Araia, founder and executive director of the Diaspora African Women's Network, objected to the title of the ONE campaign's blog post for the occasion: “South Sudan: A one-year unhappy anniversary.” Here's her Tweet that really gets to the point “Unhappy my ass. #Africa is free with or without you. Thank you very much.” There's a caution-intoning cameo by Vanessa Parra; ONE changes its headline; Semhar sends thanks. But I would recommend you read the whole thing for the ending: a thoughtful reflection by TMS Ruge, Project Diaspora co-founder, on reflexive criticism of Africa narratives.

Roving Banding wants us to imagine what would be happening in South Sudan if the country had not been independent:

So let's imagine for a second what would be happening in South Sudan if there had not been independence. Peace and prosperity? New schools, roads, and hospitals? There are a couple of approaches we might use to think about what would have happened. We could look at the history of South Sudan pre-independence. We could look at all of the sterling development initiatives led by indicted war criminal Bashir in the South between 1989 and 2005. All of the schools and hospitals that he built. Or we could look at some of the people still living in the North. Perhaps those who have fled their homes to hide in caves from Bashir's bombers. Women in South Sudan celebrating the birth of a new nation. Photo courtesy of Matata Safi.

Rob Rees identifies problems facing South Sudan. He says that not all problems can be blamed on actions of her neighbors:

Inter-ethnic rivalry, especially amongst pastoralist groups in Upper Nile and Jonglei provinces has frequently been the cause of localised fighting. Late last year however, fighting between Dinka, Nuer and Murle peoples escalated into major conflict and in Jonglei province alone, it is estimated that more than 6,000 people have died as a consequence.

Corruption is another issue which appears to be an impediment to development in RSS. Even President Salva Kiir has stated publicly that billions of dollars have been stolen from the nation by a number of (unnamed) individuals and has appealed to them to return the money to the state.

He goes on to say that events of the past year have been extremely disappointing to friends of South Sudan and Sudan:

We had all been hoping that the creation of two new states would enable their troubled history of conflict, displacement and famine to be left behind but that has not happened. Hope for a better future for the people of both countries must prevail, but whether this is achievable in the short term is doubtful. There will be no way that the two states can be isolated from each other – they will continue to share the longest international border in Africa and there is much more to be gained by each of them through having good relations rather than festering hostility.

Amanda Hsiao notes that birthday celebrations were much better that independence celebration a year ago:

One marker of progress could be found in the minutiae of the day, in particular, the level organization of this year’s ceremony. Water bottles and snacks were in ready supply for the audience while barricades prevented the crowds from surging forward, in sharp contrast to festivities the year before during which the combination of marathon speeches and the blazing heat caused many among the audience to faint from dehydration and heat stroke.

However, not all South Sudanese had a “happy birthday”:

Though there was a lot of singing, dancing, drumming, and ululating yesterday, several Sudanese friends (especially those from areas in South Sudan that still don't truly have peace) commented to me that they weren't really happy on this day because their people are still very much suffering and there is no end in sight of the war crimes being committed against innocent people. Not to mention the thousands and thousands of refugees who live in horrific conditions and are hanging onto life by a thread.

In celebrating South Sudan's birthday, David Leventhal blogs about a micro-loan scheme with a 99% repayment rate in South Sudan:

In the few years they’ve [Seed Effect, a microfinance organization operating in South Sudan] been up and running they have dispersed over $200,000 (USD) in micro-loans to over 600 clients. They maintain a 99.64% repayment rate. That’s no typo – that’s 99% repayment – something that Citi, Bank of America, JPMorgan and every other prime lender would LOVE to have. And here, in this small, land-locked, poverty stricken country in Africa they’ve achieved it! And the principle and interest from these loans gets to be redistributed into new loans which empower more families.