A little less than 17 days to go for the 2012 Olympics and the whole world is revving up for this sporting bonanza to be hosted by London – for the second time in their modern day history. For Africa, there are many prospects and for some countries, these games will be a culmination of years of preparation as well as renewed rivalries.

Afritorial gives a historical perspective of how African countries have progressed since the first time they were represented in 1908:

Africa’s countries are long time members of the Olympic family with the continent’s nations participating in the modern Olympiad since 1908, when South Africa was the lone sub Saharan team participating in London.

The second participant was Egypt in 1928 in Amsterdam. The level of participation changed in 1960 with the onslaught of African countries gaining independence from colonialism; Africans participated prior to this date, but generally as team members of their respective colonial powers. African nations are now successful participants on the world Olympic stage.

Ethiopia, South Africa, Kenya Nigeria and Ghana probably have the best chance of winning the most medals at the 2012 Games. Their athletes are phenomenal, their Olympic programs run deep and they rule the long and middle distance events while countries like Togo are only sending 2 athletes to London because they can’t afford to send more even if they qualified. 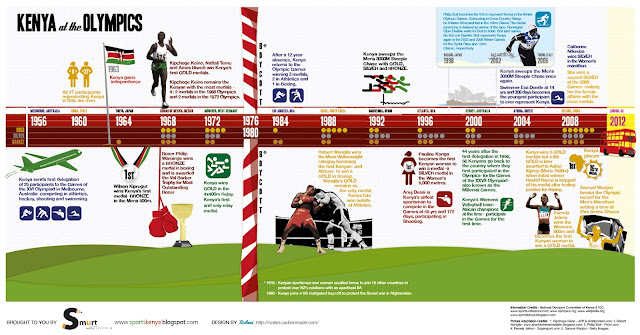 ECAD Forum reminds us of old rivalries such as the one between the Ethiopians and Kenyans in the athletics middle and long distance races:

Kenya and Ethiopia are set to continue their traditional role as the strongest African medal contenders at the Olympics.

While South Africa may be unable to match the men and women from East Africa in podium appearances, they are desperate to better a dismal showing in Beijing four years ago when 253 athletes delivered just one medal between them.

Nigeria are another country who must believe the only way is up after a one silver and three bronze return from the 2008 Games and there are bound to be surprises from African unknowns preparing under the radar.

Some Africans have gone to the ends of the earth to try and secure places at the July 27-August 12 Games with the South African men’s and women’s hockey teams and the Angolan basketball side displaying indomitable spirit.

Racial, gender and religious prejudices are noted by some of the participating countries such the Arab state of Saudi Arabia which finally allowed its women to participate in the Games for the first time:

Pierre de Coubertin, founder of the Modern-Day Olympics, wrote these words more than 90 years ago. And yet only this weekend did Saudi Arabia make the decision to allow women to compete in the Olympics for the first time. (Don’t expect to see any athletes competing in a bathing suit or leotard, though.) Qatar, excluded from consideration for 2020, announced it would submit another bid for the 2024 Olympics. Yet 2012 will be the first year that it also has fielded an Olympic team that includes women.

BA Haller links to a story about the first ever double amputee to participate in both the Paralympics and Olympics ever. And guess what, he’s African:

Oscar Pistorius is set to be the first double amputee runner at the Olympic Games after being picked by South Africa for the 400m at London 2012. The 25-year old has also been selected for the 4 x 400m relay squad. “ Today is truly one of the proudest days of my life,” said Pistorious, who will also compete in the Paralympics. “It is a real honour and I am also pleased that years of hard work, determination and sacrifice have all come together.”

Finally, enjoy a bit of Kenya’s Olympic history at the Olympics from SportsKenya.