A democratic space for interaction between service recipients and providers 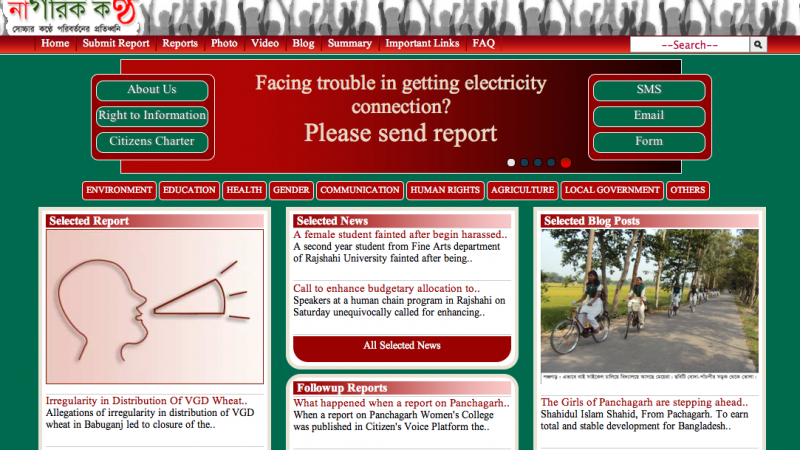 As internet connectivity grows in developing nations, technology is coming to play vital roles in shaping the trends of social activism and awareness. Although there is still limited access to internet in countries like Bangladesh, it is very promising to witness projects that are beginning to use ICT to address social issues.

Citizen’s Voice (Nagorikkontho.org) is one such project which has been launched by Population Services and Training Center (PSTC) to empower Bangladeshi public by having their voices heard, especially regarding feedback on public services. The platform supports both Bangla and English language to make it versatile for all the users and all the technology platforms (mobile texting sill do not support Bangla font).

Bangladeshi government agencies have recently defined service deliverables in their Citizens Charter. Documenting feedback about these services is important for their quality to be assessed. Citizen’s Voice believe that this would help enhance the standard of these services and bridge the common man to the public authorities:

“If common people become aware of what are their inalienable rights stated in the Citizen Charter, they can understand their needs and performance of the public service agencies. Therefore, they can monitor their deserved services and raise their voice to the civil societies and respective public authorities. This monitoring will further improve their civic facilities and augment their living status.” A stack of bricks in a parking space that shouldn't be there. From Citizen's Voice.

The portal has been built based on Ushahidi platform and it contains different reports which cite the irregularities by government institutions, and has emerged as a watchdog for such irregularities, and media outlets can use it to locate such issues. One example is a report about Panchagah Women’s College. The college was charging students a fee for entrance forms more than double as high as was sanctioned by the government.

After Citizen’s Voice published the report, the media took notice, and college authorities were ordered by the board of education to revise their fees. This is one example of how something as apparently simple as a digital report published on a website can actually be significant enough to make a practical impact on ground. To facilitate access to a common man, reports can be submitted via sms, email or through a web form.

The header on the site lists a number of questions, asking about the availability of common services – such as access to health facilities, free education, and so forth. ‘If not, please send a report,’ it says. Reports can also be submitted in the form of a video, photo or a blog post. One video listed on the website by maaDiyan on YouTube shows a busride on “the busiest highway of Bangladesh” between Dhaka and Bandarban, and how drivers skirt traffic rules to get ahead faster.

We were taking the bus back to Dhaka from Bandarban. I think it was on 10 Sep 2011. I was wondering if there were any changes to how people drive on highways in Bangladesh, after so much was going on about road safety. I got my answer. These drivers are simply crazy. There were enough traffic signs on the road, but I have a suspicion that these bus drivers think those are there for decorative purpose only.

In these ways, Citizens’ Voice offers a democratic space for interaction between service recipients and providers through technology.