The Cathedral's website, catedralsansalvador.org, which included pictures of the mural is no longer online.

El Salvador has a bloody history: 75,000 civilians were killed by the armed forces and death squads during the civil war (1980-1992) and the religious community suffered the assassination of Archbishop Oscar Romero in 1980, the murder and rape of four United States churchwomen, and a massacre of Jesuit priests. The Catholic church was particularly harmed by State violence during this period.

After the signing of a peace agreement, memory and reconciliation became priorities for many citizens. Any act in the opposite direction tends to spark a lot of reactions, as happened recently regarding the controversial destruction of one of the most visible Salvadoran memorials: a mural in the facade of the capital's San Salvador Cathedral. The Internet quickly flooded with shocked comments and calls to actions. 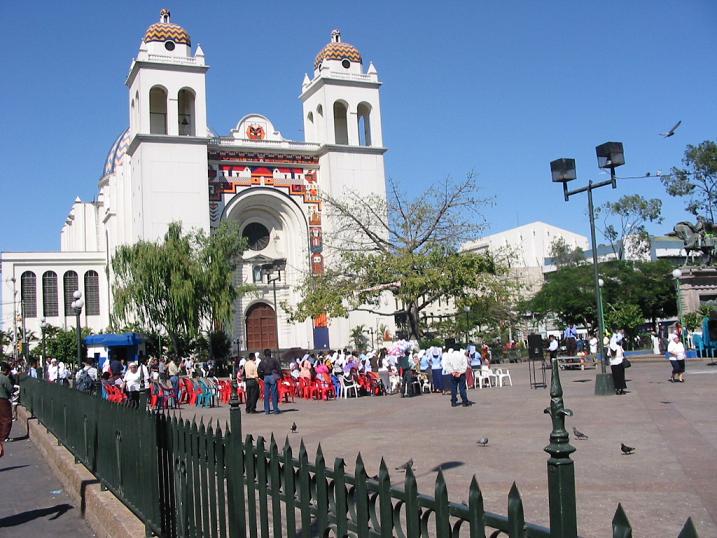 This week, without previous notice, the mural that adorned the facade of the Metropolitan Cathedral of San Salvador, by Fernando Llort, was destroyed by the ecclesiastical authorities of the precinct; I've never actually liked the mural or the cathedral, but the act itself is outrageous, disrespectful to the artist (and the artistic community in general) who conceived the idea, and to the people who helped in its construction.

How could they come up with this assault on the self-esteem of Salvadorans, on the history of this country, on art …?

On his website [es], Llort, the artist who created the work as a tribute for peace, describes his work on the Cathedral:

The Catholic Church of El Salvador asked me to design the facade for the Cathedral. This was one of the most inspiring artistic moments of my life, because it meant to me that I was putting my art on a very important symbol of my country, with huge historical significance. It was a work that took us (me and a group of artisans) around one year to finish.

Llort's mural was a symbol of peace, as Linda Raftree states in an extensive post where she explains the meaning of the art work, and draws a timeline of El Salvador's history. In “On pueblo and cathedral, ruin and rebuilding” she writes:

La Armonia de mi Pueblo is the title of the work that Salvadoran artist Fernando Llort created in 1997 to adorn the front of San Salvador’s Cathedral. Armonia is easy to translate into English – it means harmony. Pueblo is a bit more difficult. It’s a term in Spanish that includes the notion of both place and people. It comes from the Latin populus and can refer to a) inhabitants of a nation, country or region who share a similar culture; b) a population that farms in a particular zone (eg., a village or community); or c) the peasant or working class. So in essence, the title of the work is “the Harmony of my People”.

Church leaders have since apologized to the Llort family and to those who are upset by the surprise removal of the tiles. They contend that they consulted with the congregation of the cathedral, and got their approval to remove the tiles. But the Secretary of Culture has called the Catholic church out for their actions, condemning ’the destruction of the face of the Cathedral,’ and accusing the church of violating the ‘Special Law on Protection of Cultural Patrimony’ which states that ‘although the mural on the Cathedral of San Salvador was not declared a Cultural Site, it was in process of being declared, meaning that under no circumstances should any interventions have been made.’

In his article “Church ripping Llort mural from facade of Cathedral”, blogger Tim provides background information on the prominent artist and also points out the reactions on social networks against the destruction:

The Facebook page of the Fernando Llort Foundation was filled with expressions of sadness and solidarity. Another Facebook page, Indignados por El Mural, is rapidly filling with pictures and comments and anger at the blindness of the church to the meaning of this artwork.

Ironically, pictures of the mural are still included in the San Salvador Cathedral [es] website, together with a description that states that without doubt the mural contributes “a unique personality” to the Cathedral. It also states that the murals are the most meaningful reference of Salvadorean contemporary art.

Blogger Hunnapuh [es] said that it is incredibly disrespectful to destroy such valuable work of art. In his opinion the cathedral should be demolished, because of its authorities’ narrow mentality and because he considers the cathedral a terrible work of architecture which the mural somehow helped look less ugly.

However, Copinapitli thinks [es] the Cathedral controversy is just a smoke curtain, distracting citizens from really important issues yet to be addressed, such as the growing violence which resulted in 50 murders in the first four days of the year, the risks of increasing scandals due to a tax reform, and a bad economic situation in general. According to this blogger, such situations deserve more attention from Salvadoran citizens.

Tim blogs that the artist responded to the destruction of the mural and made three requests:

First, he requested that the church make a full and complete explanation of its study and reasons for destroying the mural rather than restoring it. Second, he asked that there be greater recognition in El Salvador of the value and respect due for the work of Salvadoran artists and artisans. Third, he asked that the church return to him the rubble from the tiles removed from the facade so that he could create a new art work in homage to Salvadoran artisans.

Llort currently enjoys moral rights on his art work and the destruction might be considered against Salvadorean law. In any case, it is a good sign for Salvadorean democracy that its citizens are standing up to fight for the protection of their art, their common places, their memory.