Sead93, a renowned Macedonian blogger and one of the country's most influential Twitter users, has published a satirical article which, in a way, sums up many of the local jokes about the Greek financial problems and the political situation in Macedonia.

Parodying the sensationalist style and clichés overused by the local media, he wrote [mk] about a “scandalous” revelation:

High diplomatic sources confirmed for the “Copy Paste” news portal and the “Google Translate” press agency that high political functionaries from Macedonia are behind the bankruptcy of our Southern Neighbor.

According to these sources, who, understandably, asked to remain anonymous, the last phases of the plan to bankrupt Greece, crafted and carefully implemented by Skopje, are underway. Unlike other political actions, this has been done in coordination with the opposition. The chief “ringleader” and conspirator of this plan is the first Macedonian president [Kiro Gligorov]. He has held a grudge with Greece since the 1990s due to the economic embargo, but he has especially bad blood with the [Papandreou] family, i.e. with Andreas Papandreou, the father of the recent Greek Prime Minister, George Papandreou.

The plan was to suck up Greece to spend extraordinary amounts of funds in the name dispute and the battles related to this issue. One of the key strategies were the operative activities of the special unit labeled “Traitors” whose members offered their services to Greek interests for high amounts of money. The high number of such Macedonian operatives who lead the Greeks to believe they work for them, and the associated expenses, in fact bankrupted Greece, claim informed sources.

They also add that the Skopje 2014 Project was part of this plan. Its purpose was to defocus the attention of the Greek side from the true goals. While the Greeks thought that the whole resistance and resources of the Macedonian side were being spent on this megalomaniacal project, the plan for gradual Greek bankruptcy was underway. Greeks incurred additional expenses with various activities related to lobbying against the Macedonian side, starting from the United Nations, to international beauty pageants, to various websites such as livescore.com, which have been paid off to avoid using our constitutional name.

In the conclusion of the article, Sead93 juxtaposed the photos of Savo Klimovski [mk], legal expert and former speaker of the Macedonian Parliament, and Lucas Papademos, economics expert and the current Greek prime minister.

The final phase of the plan is appointing “our man” as the head of the Greek Government, who – according to the well-informed sources – would “get the job done.” At this time, there are speculations that this task has been undertaken by Savo Klimovski, former speaker of the Parliament and Skopje Law Faculty professor. With mild corrections of his face, Klimovski has been “planted” as a “savior” of the Greek economy and state – while he in essence is a key player of the Macedonian side. […]

After this post was published, scores of social media users applauded it, sharing the link via Facebook and Twitter. It was listed within the selection of the most impressive blog posts for November [mk] on the website Krigla Pivo [Beer Mug], which, its authors think, shows the renewal and improving quality of the Macedonian blogosphere “after a longer period of abstinence and stagnation.”

However, not everybody from Macedonia was able or willing to appreciate the irony and the humor of the post, or the mentions of the excesses of the regime, according to the prevalent logic “if absolute praise is absent, then it must be an opponent.” Some comments in the post descend to ad hominem attacks.

The government's favorite pundit Milenko Nedelkovski, a perpetrator of the Brussels incident, infamous for public use of hate speech [mk] with impunity (including demands to “liquidate” “the traitors” from lists he drafts in his TV show), posted the link on his Facebook page with a comment suggesting the post is a part of some anti-Macedonian conspiracy. 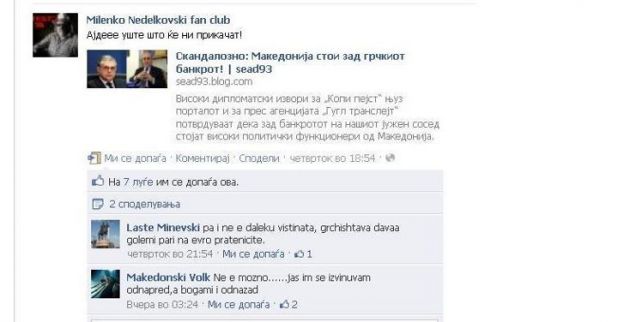 Nedelkovski is thought to be part of an inner circle of several media personages close to the leadership of the country who serve as their mouthpieces or testers of ideas. His closeness is demonstrated by the fact that he accompanied the Prime Minister (a frequent guest star of his TV show) on state visits to Singapore and Japan.

When that news became public [mk], the government issued a retraction [mk], claiming that “the journalist… covers the visits at his own expense.”