Macedonia: Is Skopje Really the Most Polluted City in the World? 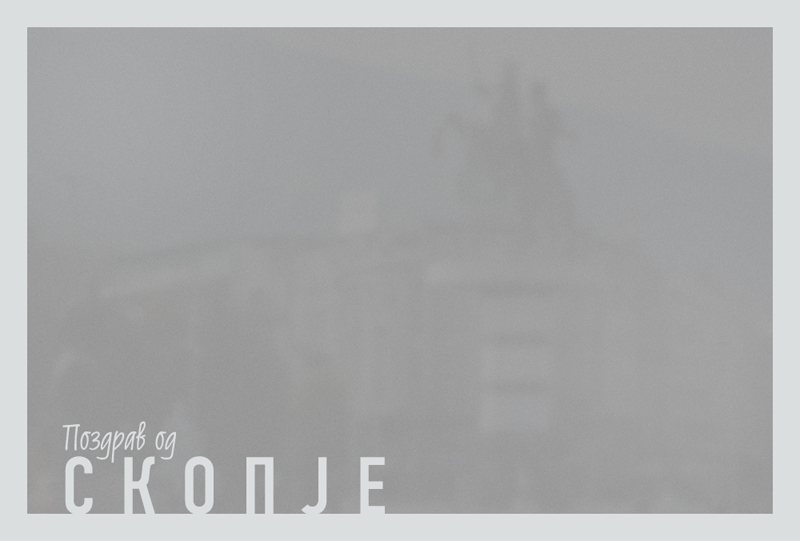 ‘Greetings from Skopje’ – postcard design by Kosta Stamatovski. Reprinted with permission by the author.

Unlike the authorities, social media users are reacting to empirical information about high levels of pollution in Skopje, the capital of Macedonia.

As part of the reforms for joining the European UNion (EU), Macedonia is required to start measuring and improving its environmental indicators. The EU progress report for 2011 [pdf] stated diplomatically by basically repeating the 2010 report [pdf] (indicating stagnation or reversal instead of real progress):

Some progress can be reported in the area of air quality. Transposition of the acquis continued with adoption of some implementing legislation. Three more Protocols to the CLRTAP were ratified. Some progress was made in developing the system of air quality monitoring. The administrative capacity remains insufficient at central and local levels. Preparations in this field are moderately advanced.

For a decade, key environment stats have been missing from the EU progress reports, since they were not supplied by the Macedonian government. (Click to enlarge the screenshot)

During the last two and a half weeks, an air quality measuring station called “Skopje Breathing”, which was installed in the busy city center to publish its data online in real time, has provided a new dimension for citizens and some journalists from Skopje.

The portal PlusInfo.mk started covering this issue in detail, and is also providing real-time numbers for the amount of sharing via social media. The article [mk] from Friday, December 3, compared the “shocking” level of pollution with the WHO air pollution database:

According to the World Health Organization data [from September], the most polluted city in the world is Ahvaz in Iran with 372 micrograms of PM10 dust per cubic meter. At this time the City of Skopje website “Skopje Breething” says that the prevalence of this type of dust is 433 micrograms per cubic meter.

The WHO limit for PM10 is 50 micrograms per cubic meter of air.

This article received over 1,432 Facebook shares and at least 19 tweets, leading to over 22,185 readings by the time of closing of this post. Other articles on this topic also received significant social media attention, especially the one on the temporary unannounced shut-down of the measuring and reporting system for six hours the day after. Other media [mk] also continue to follow the measurements, which on December 4 were 488.99 micrograms per cubic meter. The governmental bodies in charge of environmental protection either kept silent or offered the usual excuses – not within their competence, will investigate, etc.

While comparing the current (daily) measures with the WHO annual averages is questionable from the viewpoint of methodology, no official expert has provided retractions or scientific explanation about the comparison and the actual pollution. The annual mean PM10 for Skopje is 80 micrograms per cubic meter, according to the WHO database. The current metrics show a somewhat lower level than the “world record,” which nevertheless remains dangerously high. A screenshot of 'Skopje breathing' for Monday, Dec 5. The air quality is designated as very unhealthy.

Tumblr user Stamatovski responded by creating a new postcard for Skopje (main photo of this post), which also received quite a few reposts and re-tweets.

Alright everybody, after “the postcard” incited so much interest – which I did not expect – let me remind you that we are all responsible for what it represents!

Also, this is nothing new, nor is it going to change in a couple of days! Let us all stop driving in our cars alone, let's not use our cars to go even to our kitchen, let us not insist on parking 3 millimeters from our destinations, and generally let's all become more aware of the environment.

And let us all wish for some snow ASAP. :)

On the other hand, Dejan Spaseski criticized [mk] the excessive reactions to the news about the pollution via his Personal Development blog:

For a long time, everybody has known about air quality in Skopje. The only difference is that now we have a higher awareness. We also have a way to click and receive the current information immediately. This has made a huge difference.

My personal philosophy is that you have to do everything step by step, according to the interest effect principle… Everything needs time, it is enough to start doing something to change the current situation. This is a great start for me and we are moving in the right direction.

Some of the [social media] reactions made me laugh… Most of the initial comments were accusations that this is a result of the constant building and rebuilding in Skopje, new high-rises, cutting of the [Vodno] forest, building of Porta Vlae and Kapishtec apartment blocks, to the point that we don't need Skopje 2014. Most of the people complained that the Central Government or the Skopje Mayor haven't done a thing about this in years.

Some people claimed that they wouldn't get outside until the fog lifts, until the air quality returns to the limits of world standards – like in the big metropolises. If they sit at home, would they breathe cleaner air, or just feel better? Others said they wouldn't go out until Skopje is no longer the first in pollution. I cannot fathom why they feel relieved if there's another, more polluted city? Maybe the feeling that they are not victim number 1 but victim number 2 worldwide?

People rebel about pollution, but they all like to come and live in Skopje. I am very revolted by those who constantly keep saying they can hardly wait for Friday so they could leave towards their birthplace, or have a weekend in [Ohrid] or [Krushevo]. To get away from the stench. So why are they [coming back on Monday]?

It is not loyal to spit on the city we live in. The city that has offered us existence. In return, think about how you can help improve it. Now that you know about air pollution, ride a bus instead of driving your car. It would be cheaper and less damaging to the environment…

It is naturally easier to spit and blame. It makes things easier. Instead, try to act and think differently…

To bring the city into such a state, it took several decades. It would take as much time to repair the situation.

While the apologetic attitude towards the responsible authorities received counter-criticism [mk] on Ping.mk, Twitter user Gjorgji Taskovski responded to a far more concrete aspect of the text:

Why do the people who want to “get away” from Skopje over the weekend revolt you? I'll use a personal example: I have two kids, born 2005 (male) and 2006 (female). They prosper, except that the boy has runny nose all the time. Every season we made allergy tests with no results. The responsible physician, who is also a friend, advised us to move to the Radishani [a suburb on the slopes of a nearby mountain]. And now you say I should be ashamed to run away from Skopje over the weekend (even though I was born here). [For the sake of my children] I will run, what do I care! My wife is from [Kriva Palanka] and her parents returned to the village of their birth a year ago… When the kids are there, the change is amazing: no running nose, they eat [like wolves]…

I agree that pollution [in Skopje] has been high for years. Solution: the same as [Ljubljana]. Restrictions on moving into the city from other towns, relocation of jobs by relocating factories, possibilities for studies outside of Skopje and, above all, a developed rail network. Anyone who has lived in Germany or England or anywhere else in Europe would grasp the importance of this [Macedonian railways are infamous for their inefficiency and low mileage]. Removal of older trucks from Skopje is another super option – they are used in construction business, but that's not my problem. And above all, we have to admit that we live in a city with catastrophic urban planning, which spreads only longitudinally [along the Vardar river], and that building of new sports terrains, Vero supermarkets, cinemas etc. are not the only precondition for high quality of life. […] I say “Big deal!” to organizing swarm festivals, the great night life, or the [awesome Zoo]. Try to raise kids in this city, you'll change the way you think.