This post was commissioned as part of a Pulitzer Center/Global Voices Online series on Food Insecurity. These reports draw on multimedia reporting featured on the Pulitzer Gateway to Food Insecurity and bloggers discussing the issues worldwide.

As governments gear up for the United Nations Climate Change Conference (COP17) in Durban, South Africa, which starts today, experts are warning that among climate change's greatest consequences in developing countries such as Bangladesh are risks to the agriculture sector, including an increased risk of hunger, malnutrition and food insecurity.

Hunger and malnutrition on the rise 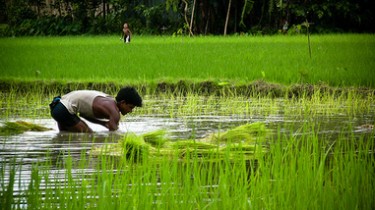 A Bangladeshi farmer re-transplanting his field due to flooding. Image by Flickr user IRRI Images (CC BY 2.0).

Most of the increase is expected in Sub-Saharan Africa and parts of South Asia and Central America, as detailed in these maps. Already, the report says, natural disasters are more frequent and intense, land and water are becoming more scarce and difficult to access and it is getting harder to achieve increases in agricultural productivity.

At least ten countries are highly vulnerable to a climate-related food crisis, an ActionAid report released last month showed. Among the five most vulnerable countries, alongside the Democratic Republic of Congo, Burundi, South Africa and Haiti, is Bangladesh. Composed largely of low-lying land and islands with a high density population, little arable land, and frequent natural disasters, Bangladesh has been described as the “'ground zero’ at the intersection of climate change and food security” by bloggers from the World Bank and Aid Data.

Mirza Galib, a lecturer at Bangladesh's Primeasia University, expands on the potential implications in The Daily Star:

Scientists tell us that the most profoundly damaging impact of climate change in Bangladesh will take form in floods, salinity intrusion and droughts, all of which will drastically affect crop productivity and food security. We will also face riverbank erosion, sea water level rise and lack of fresh water in the coastal zones. The prognosis is more extreme floods in a country already devastated by floods; less food for our country in which half our children already don't have enough to eat; and less clean water for where waterborne diseases are already responsible for 24 percent of all deaths.

Bangladesh has made progress in reducing hunger, with its number of undernourished people dropping to 27 percent as of January 2011, and its annual rice production tripling over three decades. But since agriculture is a key economic industry, making up nearly 20 percent of Bangladesh's gross domestic product (GDP) and 65 percent of the labor force according to a World Bank report, climate change threatens to erode these gains.

Climate change is predicted to reduce rice production, Bangladesh’s main crop, and increase the country’s reliance on other crops and imported food grains. Crop production is potentially set to decline for at least one crop in each region…Overall, agricultural GDP in Bangladesh is projected to be 3.1 percent lower each year as a result of climate change.

While the Bangladeshi government has some good adaptation plans in place, to further help combat climate change's impact on agriculture, the ActionAid report calls for efforts such as greater investment in small farms in poor countries, the immediate delivery of “climate cash” to help poor farmers climate-proof their agriculture, creating a system of pan-regional food reserves, and binding cuts in rich countries’ carbon emissions.

The U.S. and Canada and Europe, because we have the capacity to produce big [food] surpluses, and Brazil and Argentina, the only places on Earth with 20 feet of topsoil…, we should offer longer-term contracts to the Chinese, the Saudis and others for basic grains at prices that will guarantee decent profits, but not exhorbant ones, and stop price spikes but keep prices high enough to get investment into agricultural activities in Africa, Latin America, Southeast Asia…Until you develop a sustainable agricultural framework in these countries, they not are going to benefit.

Shammunul Islam and M Mizanur Rahman, in a post for Bangladesh's New Age, also call for sustainable agriculture, since agriculture is a contributor to the greenhouse gas effect. Sahidul Haque, in an opinion piece for Bangladesh's The Financial Express, says more higher yielding seeds are also needed, as well as varieties that can grow in drought and saline conditions. Researcher Winston Yu, in a Q&A by Gudrun Freese on the blog earthscan, says fortunately many of the current solutions to minimize climate change's impact on Bangladesh, whether it's flood management or new crop varieties, will also benefit the country in the future.

To improve awareness of climate change issues among Bangladeshis, as well as voice their stories of climate change, gender and food sovereignty, two groups have organized a climate change caravan that is currently traveling across the country. One hope is that these stories will help motivate solutions from Western countries, which often use a much larger share of the world's food, water, energy and carbon than developing countries, according to the ActionAid report. For example, each U.S. citizen consumes an average of 260 pounds of meat per year, about 40 times more than the average Bangladeshi.

Natasha Haider elaborates on this discrepancy in her blog:

Bangladesh has one of the lowest per capita carbon dioxide emissions in the world. There are two principal reasons for such low emissions. First, Bangladesh does not have many energy intensive industries such as steel and aluminum manufacturing. Second, nearly 70 percent of the commercial primary energy comes from natural gas. Therefore, the solution to global warming is largely out of its hands and lies with developed countries or rapidly industrializing ones, mostly in the West.

In the meantime, Nazifa Islam, blogging on South Asian Generation Next, says Bangladesh has already become an innovative source of solutions:

While developed countries are scratching their heads over how to reverse climate change or how to deal with it, Bangladesh already has a head start. From growing rice in saline waters to creating mobile homes, the people of this nation are calling upon every innovative idea to assist in survival. If anything, the most terribly affected place has become a “thinkbowl” for solutions to climate change. Prone to natural disasters from what seems like the beginning of time, Bangladesh has become very good at dealing with all that Mother Nature decides to throw at her, bending like bamboo but never breaking.