The Yogyakarta princess, Gusti Raden Ajeng (GRAj) Nurastuti Wijareni a.k.a Jeng Reni, tied the knot Tuesday October 18, 2011, and everybody was invited to witness the ceremony via the Internet.

Jeng Reni, the youngest daughter of Sultan Hamengkubuwono X, married Achmad Ubaidillah, known affectionately as Yuda, and for the first time ever, a royal wedding was reported in realtime through Twitter.

Prior to the wedding, Ubai was knighted and given the name Kanjeng Pangeran Haryo Yudanegara. As for Reni, her new royal title will be Gusti Kanjeng Ratu Bendara.

Javanese royal names can differ depending on the person's current status, whether the person is a man, woman, young adult, or adult, proximity to the Sultan, and so forth.

Ubai, a Javanese descent born in Jakarta, met Jeng Reni through a mutual a friend. The lovestruck Ubai didn't know at first that the girl he fell in love with was a Javanese princess of one of the oldest royal houses in the archipelago. The couple dated for four years.

Waves of wishes, greetings, and comments were pouring at #kratonwedding and #kirab (author's note: means carnival in Javanese).

@kikoadh: #KratonWedding !!!! Malioboro is so crowded and everyone's sweating. But it was fun

@helloikun: Happy for the marriage of GKR Bendara & KPH Yudanegara. I wish the two of you a serene and happy family.

@ferrymbaldan: Amazing… A sea of people attending the carnival from the Kraton (author's note: Royal Palace) to the Kesatriyan (the Knights’ Ward). Special Region of Yogyakara is truly special and it should remain that way.

Some Twitter users, like Dayu, were disappointed that major TV networks didn't care enough to cover one of the major events of the year:

@DayuWijanto: Why only on BChannel? Where are other cool and popular TV stations? This is a matter of the country's cultural heritage. Unacceptable.

Javanese weddings are known for their elaborate processions which could begin days before the nuptial, and last up to seven days. A strict dress code is applied to guests and those who are allowed to enter the ceremony hall.

The Royal Guards. Photo by irwan_f3

The photographers in traditional Javanese attire. Photo published by @kratonwedding on Twitpic. 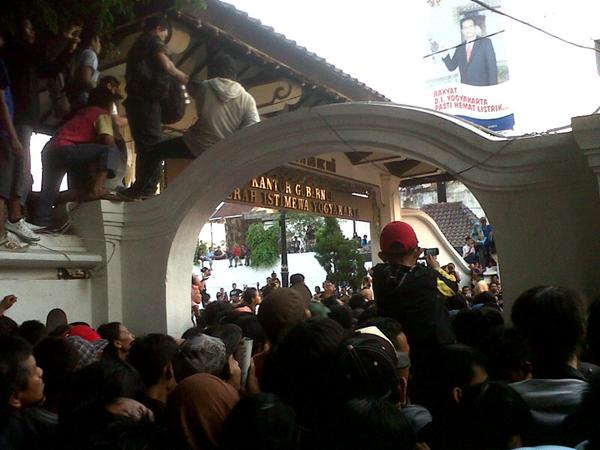 Her Serene Highness GKR Hemas and the relatives arrived at the Knights Ward. Photo by Kraton Wedding on Tumblr.

Sultan Hamengkubuwono X, the couple and President Yudhoyono. Photo by @kratonwedding on Twitpic. Greeting the Yogyakartans from the open carriage. Photo by @kratonwedding published on Twitpic.

The Indonesian state recognizes Yogyakarta as a Special Region in the archipelago with Sultan Hamengkubuono X acting as its governor.

The Yogya Sultan is highly revered by his subjects. Back in 2009, he was nominated as a presidential candidate by Golongan Karya (Golkar) party.