The Australian government’s attempt to take a hard line on people smugglers and asylum seekers arriving by boat has hit a major snag. In December 2010, approximately 50 asylum seekers were drowned at Christmas Island when their boat was smashed on the rocks. A legal challenge has postponed a swap of the surviving refugees with Malaysia.

The challenge, led by QC David Manne on behalf of 42 recently arrived asylum seekers (including six unaccompanied minors), focuses on human rights surrounding the policy and questions what protection Malaysia will offer to asylum seekers sent by Australia.

…Sixteen of the men were due to fly out to Malaysia yesterday, the first of the government’s new refugee swap deal with Malaysia, which will see 800 “boat people” swapped with 4000 refugees from Malaysia.

The plan has had some limited support in the blogosphere but has been criticised by both those wanting a stop to the so-called ‘boat people’ arrivals and those with concerns about human rights.

Laberal who claims to be ‘bored with trying to find the differences between the two parties, the Labor Party and the Liberal Party’ (the two major parties) presents his view in cartoon form: 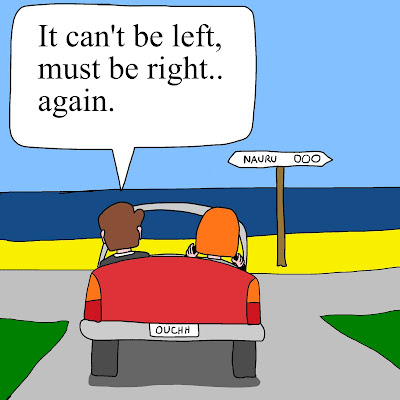 Ian's cartoon harks back to the former Howard government’s Pacific solution of sending boat arrivals to Nauru, a policy that the current Gillard government has rejected.

In Border fantasies out of control, Kim of group blog Lavartus Prodeo looks at some disturbing poll figures that may help to explain the government’s tough stance:

Still, if the poll is right and fact would lower the number of “very concerned” Australians from 43% to 33%, it’s still a rather stunning figure. The beast seems to have taken on a life of its own.

Charitably, one might assume that at least some of this concern might be around a desire to avoid such horrors as happened near Christmas Island around Christmas last year.

Legal Eagle at Skeptic Lawyer is no fan of the latest solution:

I must confess to being sceptical from the beginning about the Malaysian “solution”. Deporting people to far flung islands or other countries does not provide much of a “solution”. There needs to be a total paradigm shift. The real problem, as I’ve said before, is about the perverse incentives our law sets up for asylum seekers — it’s easier for a person to get a visa once they are here on our soil than it is when they are off our soil, even though the asylum seeker’s circumstances have not changed one iota.

In Christians cannot accept Malaysia solution Rob Benson of iDigress ‘Musings of an antipodean contrarian’ looks at the issue from a moral standpoint:

The federal government’s so-called “Malaysia solution” looks like decisive action, but it’s abhorrent from a human rights perspective, and at odds with a balanced Christian view of justice and compassion.

The policy will send a message to prospective asylum seekers and people traffickers, but it is simply the wrong thing to do.

Peter’s Aussie Views News is primarily concerned with the children, especially those not accompanied by adults:

I do not know under what degree of anguish and suffering a mother might send her child in a small boat to a foreign land. But I do know what degree of callousness is required to send an unaccompanied child in a plane to Malaysia. It remains to be seen whether Australia will abandon its international responsibilities and any claim to the concept of “fair go” and send the recently arrived unaccompanied children to Malaysia.

John George has Had Enough at Had Enough. He neither supports the government or people who he calls ‘illegals’.

So the Malaysian Solution looks doomed; another Gillard debacle. We are now going to open the doors to 4000 so-called refugees regardless of whether any of our illegals are transferred to Malaysia. I mean the deal was lop-sided in the first place but now it is worse. I mean does this lot have a licence on stupidity or what?

Why on earth Gillard & Co have to be so darned stubborn as to turn their backs on the Naru Solution just because they might be seen as supporting a Howard Initiative is beyond me.

So here we are: Australia in 2011. For convenience we have forgotten our origins, our good fortune, our blindness and our selfishness. In place of memory we have constructed a national myth of a generous, welcoming country, a land of new arrivals where everyone gets a fair go; a myth in which vanity fills the emptiness where the truth was forgotten.

Or perhaps it's not a myth after all. Perhaps our national image is true, but our politicians have forgotten what it is. If we value who we are, we should remind them. Because our true character as a nation is being reshaped each day by what our politicians do in our name. Tell Canberra we are better than that, lest we forget.

Whatever the result of the legal action, the issue of asylum seekers is not going away in a hurry, especially while there is no consensus between the political parties on how to deal with it.