On the eve of the big protest against police brutality scheduled for Sunday afternoon in Skopje, several pro-government media outlets tried to manipulate the public by showing an anti-opposition announcement by a fake group of protestors.

The Sunday protest involved a concert [mk] and a march [mk]. Vnukot informed about the preparations the day before:

Protesters in Skopje used the pause on Saturday to coordinate ahead of tomorrow's big protest. People from all over the country said that they will attend. 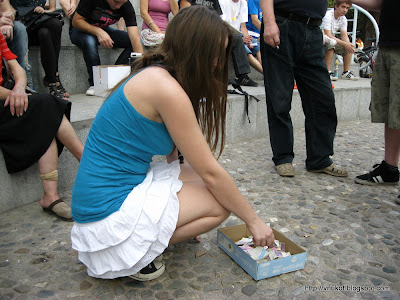 The day was marked by an attempt to divert attention by installing false representatives of the protests, “exclusively” [mk] in front of a few pro-government media. They were supposed to involve the political parties in the protests, and also to create an impression that there'll be no protests tomorrow. On the other hand, people are positively surprised by the fact that the president of the country, Gjorgje Ivanov acknowledged young people's fight [mk] for a better tomorrow.

So far, the protesters have managed without formal leadership hierarchy or PR representatives, by forming working bodies for specific tasks and taking turns when making media statements. Thus, the reported “appointment” of a “protest leader” – of a certain Biljana Todoroska – as presented by online outlet Kurir and TV channels Kanal 5 and Sitel (directly tied to ruling party apparatchiks/coalition partners) – runs counter to the whole spirit of the protests and was quickly debunked.

Other media relayed the statement by the real protesters, denying the impostors’ claim that “the protests will continue on Monday” in front of the offices of the main opposition party which allegedly tried to manipulate them (i.e., nothing will happen on Sunday).

Barabass reminded readers [mk] of a warning [mk] he had given – that sending counter-protests is a favorite tactics of the government a few days ago (June 15, the tenth day of the protests):

Come on!? How come this much time has passed without counter-protests?

[Last time], when the architects spoke out, they sent a horde of crusaders who beat them up, as good Christians full of love. What kind of beast will they send next?

For a while, the Twitter community brewed with outrage via #protestiram and #Martin, which soon turned to ridicule, using the hashtag #Biljana by the first name of the designated [mk] “avatar of the spokesman of the ruling party”.

While nobody recalled seeing her or her associates serving as decor at the protests, the “wisdom of the crowd” soon discovered that the young woman was a supporter of the ruling party – by discovering her Facebook profile.

Also, it turned out that Ms Todoroska had been used as the ‘voice of youth’ in another media event – a staged “news item” [mk] about “young people voting in the excellently organized free and fair elections,” aired a few weeks ago on the pro-government Kanal 5.

At the Sunday protest, a new banner appeared, saying “Even Biljana cannot launder your responsibility” – making a joke on the name, because “Biljana” is also a domestic brand of a detergent. Even Biljana cannot wash away your responsibility – photo by vldmrk

Later, on the Sunday evening news, the two television stations owned by the government coalition partners provided widely different coverage of the day.

Sitel TV (allegedly designated [mk] as the “government mouthpiece” in a leaked US Embassy e-mail) continued with the montage [mk], interposing footage from the press conference of the impostors with information about the ongoing protest, continuing the blatant manipulation.

On the other hand, Kanal 5 informed [mk] quite objectively about the protest, and aired the participants’ statement denying ties with the impostors.