Following Toronto’s lead, Australians have started a series of SlutWalks with Melbourne’s first march on Saturday 28 May, 2011. The catchphrase: Make it known that those who experience sexual assault are never the ones at fault.

Leslie Cannold, one of the speakers, was clear about the reasons for her support of the march at her self-titled blog:

Today what we are doing is TAKING BACK the word slut. By RECLAIMING the word slut we DISEMPOWER IT. Gays have reclaimed the word Queer, and good on them. Today the women and men of Melbourne are reclaiming the word SLUT.

Melinda Tankard Reist, author of Getting Real: Challenging the Sexualisation of Girls, has other ideas at The Punch:

Using slut as the flagship word for this new movement puts women in danger through giving men even more license to think about women in a way that suits them, and not as targets of violence and terrible social discrimination.

Jimbo blogs at In My Father’s Footsteps. A chance encounter with the march brought these thoughts about whether it is ‘feminist folly':

Point is, while I fully support the notion that women (or the way they choose to dress) should not be blamed for the lustful crimes committed by men (or other women!), I’d wish they would pick a better banner to express themselves.

Somehow calling themselves ‘sluts’ and trying to ‘reclaim the word’ for themselves in protest just seems not right.

Karen Pickering, one of the organisers of SlutWalk Melbourne, explained her involvement at Crikey:

But if criticism has come from every direction, so has a kind of intuitive, organic support. We’ve welcomed a diverse cross-section of people into the SlutWalk community. We’ve got grandmothers marching with their whole families, women marching in hijab, young people, old people, gay, straight, trans, bi, black, white, male, female, sluts and their allies all coming together for one moment to stand together against victim-blaming.

Melissa from Brisbane has a wide ranging response. She is concerned about the use of the word ‘slut':

I'm not sure that the word ‘slut’ can (or even should) be ‘reappropriated’. I think that there are some pejorative terms that ought to be simply retired. Not accepted, not changed. Banished forever.

But her concerns go far deeper than terminology:

March for your right to safety from sexual violence. Blog about the prevailing derision rape victims receive from those who snigger and whisper that they ‘had it coming’ or shouldn't have ‘dressed like a slut’.

But please. Open your eyes. Look at the world around you and how horrific it is to be a woman in Africa or the Middle East or the Sub Continent.

Don't march for me. Don't dress in costume and turn this issue into a mockery, declaring it a march for human rights if you can't see the big picture.

Michelle is also from Brisbane and attended the walk. Her The Red Pill Survival Guide has video and photos including these two images: 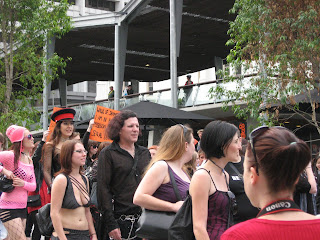 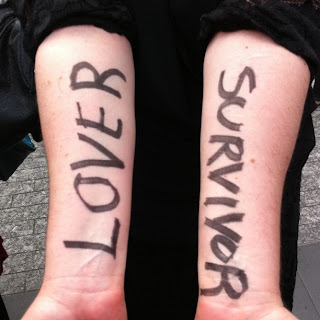 Her earlier rant explained her views:

We are marching because despite people making the right noises, the message isn't getting through.

It may also come as a surprise to some of you, but these marches aren't full of women dressed in revealing clothing. Sure, some will do that and I say go for it; but it's not a prerequisite.