The Forgotten Palestinian Refugees of Libya

Libya's civilian population, currently engaged in pro-democracy conflict against long-standing leader Muammar Gaddafi's repressive forces, have endured weeks of deadly attacks. Waves of civilians have fled the country via its borders with Tunisia and Egypt, where refugee camps providing emergency aid have been installed. More than 10 percent of Libya's inhabitants are immigrants. Among them, there are reportedly up to 70,000 Palestinian refugee settlers.

Most are unable to return to Palestine: their identity cards – and therefore right of residency in their homeland – were revoked by Israel in its ‘quiet deportation’ policy. Between December 1995 and March 1999, Israel started to revoke residency rights for individuals who had moved outside Jerusalem's municipal boundaries, but no warning of the policy was giving to those Palestinian residents living outside the city.

In the previous weeks, over 10,000 migrants have fled to Tunisia border, where they have been evacuated by their respective national embassies.

The Palestinian Authority has tried to coordinate the evacuation of the Palestinian community in Libya; Israel has offered to allow 300 into the occupied territories as a “humanitarian gesture”.

On March 1, 2011, the Palestinian Embassy informed its nationals in Libya that they had been granted safe passage to Egypt, in cooperation with the Egyptian authorities. They blamed the difficulty experienced in the evacuation of Palestinians compared to citizens from other countries, on the Authority’s limited means.

However, as the first Palestinians arrived at the Salloum crossing on the Egyptian border, entry into Egypt was denied. Users on microblogging website Twitter commented:

@Abou_3ali [Yemen] From friend in Salloum: Egypt denies entry to Palestinians and took 70 back to small empty village, some things never change.

@El_Deeb [Egypt]: All nationalities allowed to cross the borders from Libya to Egypt except Palestinians! This is disastrous! 70 Palestinians asked by Army to get on buses supposedly to go to Rafah Border Crossing then to Gaza strip. Buses took them back to Libya!

@altahawi [Egypt] For not having a valid residence in #Egypt, 42 Palestinians pushed back from Salloum port to Libya last week!

Approximately 1,500 Palestinians have tried to cross into Egypt since Monday 7 March, 2011, but the Egyptian military have received clear instructions to not let Palestinians refugees in [ar]. Many Palestinians who had travelled to the border returned home, to the Libyan cities of Benghazi and Tobruk.

On Tuesday 8 March, 2011, 15 Palestinians were still in Salloum demanding to cross, while hundreds of other Palestinians refusing to go back to their homes, had chosen to wait in the homes of Libyan host families in a village near the crossing.

It has been reported that Palestinians without national identity cards or valid residency in Egypt were not allowed to cross, whereas even Asian labourers without papers [ar] managed to get into the country. Palestinians in Gaza have reacted to the situation on their private Facebook profiles:

Ibtihal I have my uncle in Misurata, he doesn’t have an ID, he can’t go to Egypt during a normal situation. Now it’s much more difficult. Basically, Palestinians without IDs don’t have the permission to go to Gaza, I guess the Egyptian authorities are still following the same procedure. Because of the internal situation in Egypt, they must think that Palestinians will be a sort of threat. They don’t care about emergency.

Ibrahim Those Palestinians have no IDs, the other refugees have a country, a homeland that will care about bringing them back home. Palestinians don’t; if they cross to Egypt, they have nowhere to go, neither to Gaza, nor to the West Bank, and Egypt don’t want to take responsibility of them. What’s more worrying is not the situation of Palestinians East of Libya, but of those West; we don’t even know if they tried to reach border with Tunisia.

As to how many Palestinians have reached the Tunisian border, there does not seem to be any update. A Palestinian aid convoy has reportedly set off from the Embassy in Tunis to help with the humanitarian crisis emerging at the Tunisian-Libyan border.

Arrangements are being made, where possible, for those Palestinans who have had to stay in Libya:

@libyansrevolt: There is a Palestinian that lives in a house at the bottom of our farm in Tripoli – we don’t charge him rent.

The blog Uprooted Palestinians has issued a call for help from Palestinians refugees who used to live in Lebanon and fled the civil war there to come to Libya, asking for a coordinated Lebanese-Palestinian intervention to allow them to depart Libya:

We are lost because no one is caring about us or following our news.

We the Palestinians living in Libya for more than 35 years have come from Lebanon to flee (civil) war and resided among our brothers in Libya where we got married and worked. However, after the 17 February revolution and the worsening security situation we tried to leave the country via its ports but were not allowed because of inadequate travel documents. We are now stranded and sell our belongings to eat; we do not have work or shelter and do not know what to do or where to go.

The situation is fast becoming critical. Latest reports state that soldiers loyal to Gaddafi have blocked some 30,000 migrant workers from fleeing into Tunisia.

It is urgent to shed light on the fate of those refugees locked up in a country that is currently on the brink. 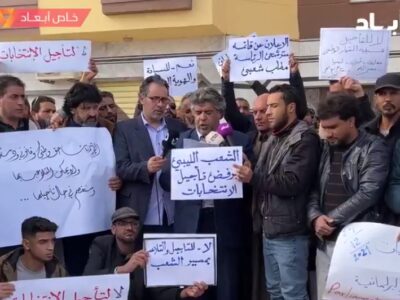