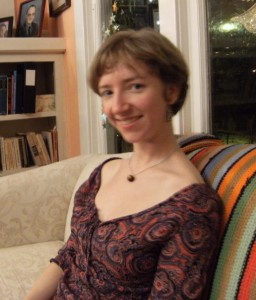 Sarah Standish is a young American teacher and blogger with a mission. In addition to teaching Arabic to high school students in the US, the Arabic Lingua member hopes to bridge the gap between the East and West and create more understanding of the Arab way of life and thinking. I was pretty much impressed when I read her profile, and got even more impressed when I talked with her and this is how the interview went.

Is your main job related to journalism?

Not at all. I teach Arabic to high school students in the United States.

When and why did you start blogging?

I started blogging when I went to Syria to study because I'd been following many Syrian bloggers even before I left, which inspired me to blog, and because I wanted an easy way to communicate with my family, friends, and acquaintances back home. Some of them were excited for me, others were wondering if I'd be safe, and others didn't know enough about the Middle East even to stereotype it. In all cases, I wanted to show them a little bit of what being in Syria was really like.

How did you know about Global Voices Online and what made you interested in it?

I first encountered Global Voices when I was writing a paper about Syrian bloggers in college. I felt like I was wading hip-deep through a lot of uninspired blog writing to find the good pieces, so it was great to learn that there was a site dedicated to making the blogosphere digestible to the public and helping them find what deserves to be read. I also love that GV fills a niche that no other organization or website I can think of really does. I started writing for GV after one of the Arabic Translation Managers, whom I became friends with in Syria, asked me if I would be interested in translating for Arabic Lingua.

What made you so interested in the Arabic language?

I've always loved languages, whether my native tongue or someone else's. I started studying Arabic on a whim during college and I found I enjoyed the challenge of such a difficult language, in addition to my interest in knowing more about the Middle East. As time went on, I came to love the incredible precision of the formal language, and the inventive flexibility its colloquial counterpart. I think studying Arabic and the Middle East was humbling–as I learned more about both, it only made me realize how much I didn't–and still don't–know.

As you seem so inspired by the Arab world, do you think it affected your life as an American citizen?

Yes, in many different ways. Meeting people in the Middle East who were directly or indirectly affected by the American foreign policy made me understand the sometimes terrible human cost of those policies. On the other hand, I also came to appreciate some of the United States’ domestic institutions of government, for all their inefficiencies and injustices, more than I had before. I also think going to the Middle East showed me just what it means to be an American citizen, how little bits of American power and privilege get attached to each citizen and follow us around the world, whether we like it or not. Being an American citizen means that I can cross almost any border, visit almost any country, in a way that people of many other nationalities cannot. It means that I have privileges in other countries that citizens of those countries may not enjoy; criticizing a country's leadership in the Middle East would be more likely to get me deported than to get me thrown in jail. And finally, I always have the freedom and economic ability to leave the places I go. That may not really really sum up what being an American citizen is, but for me, it really personified the fact that my nationality gives me privileges either that I have no particular right to, or that more ideally everyone else should have too.

For me it's hard to compare because teaching is a job and profession whereas blogging was only ever going to be a hobby. I guess they're similar, though, in that both involve trying to put ideas into a form that will make them more palatable or understandable to other people, and in both cases you're not always sure whether or not you're getting through to part of your audience!

Can you tell us your experience during the last GV summit in Chile?

I was inspired by the degree to which GV is run openly and democratically. I know some people think that it's now less open and democratic than it used to be, but compared to other organizations, I think there's still a lot there to emulate. And of course, it was awesome to meet so many people in person whom I'd only communicated with online!

How do you see yourself after 10 years?

Gosh, that's a good question. I'm not sure! Hopefully I'll have figured out how to get high school students to a good level of Arabic within four years. Hopefully I'll have been part of the small but growing number of Arabic teachers who want to integrate Arabic dialect into the teaching of Modern Standard Arabic (the written form of the language that's widely taught in the United States). And after that, I'm not sure what I'll do!

Finally, what would you like to say to GV?

I'd say that GV has a ton to offer because it successfully does what few websites really manage: it fills a unique niche and does it in an exemplary way. I'd also say that I hope it can continue to be as democratic and open as it is over the next few years, or even become more so, and that it can figure out how to present bloggers’ opinions in such a compelling way that even more people will read about them.

Finally, I would like to thank Sarah for her great help and effort.