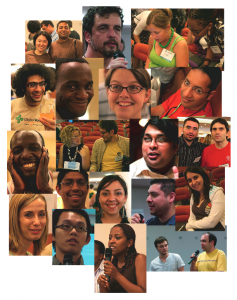 When we started Global Voices six years ago, we had a simple goal: to give our readers access to the wide world we were encountering online. Reading blogs from around the world gave both of us a perspective we weren't able to get from newspapers, radio or television: the voices of ordinary people using new technologies to share their perspectives, opinions and points of view about events big and small in their communities. So we built a simple website – Global Voices Online.

Six years later, our simple site has grown into an indispensable resource for anyone who wants to know what people are talking and thinking about from Cameroon to Cambodia. It's a labor of love produced by 400 people around the world who see citizen media in all its forms – videos, photographs, podcasts, Twitter posts, Facebook updates, blogs – as a powerful tool to build connections across barriers of language, culture and nation.

Global Voices is one of several – and we believe, vital – grassroots non-commercial efforts that are working hard to build a civilization within the new and rapidly-evolving global information rainforest based on values of free expression, openness, and mutual respect. If we have learned anything in the past few years, it's that just because the Internet exists, and just because anybody can now create media, that doesn't automatically mean the world will be more democratic or peaceful.

While many of us are enthusiastic users of various Google products, Facebook and Twitter, we don't believe that commercial Internet businesses alone will serve the interests and protect the rights of all the world's people. We – citizens living around the world who believe in our right to create independent online media – need to make a concerted effort to build structures and systems that will nurture and sustain the kind of world we want to live in. Global Voices is a community of people who are acting like real citizens – not mere passive “internet users” – and who are taking personal responsibility for the future of our society.

The vast majority of the people involved with Global Voices are volunteers, like the two of us. The six people who work nearly full time on the project, and 20-plus who receive modest part-time compensation are far from getting rich off the work. Everyone who works on Global Voices is motivated by passion: for featuring voices that are rarely heard outside their own communities, for defending freedom of speech online, for building connections between people around the world.

Even with so much support from passionate volunteers, we need financial support to keep this project going and growing. Global Voices has become an incubator for important and innovative projects around the globe. When you donate, you're not just supporting the 20 websites we already produce (in 17 languages!) – you're making it possible for us to support innovation and experimentation to make sure that our projects can continue to adapt to a rapidly changing, increasingly mobile Internet.

If you believe the work we're doing at Global Voices is important for making the world a wider and more connected place, we hope you'll support us with a donation.

With our thanks and very best wishes,