*All links are in French unless stated otherwise.

October 19 was the seventh consecutive day of nationwide demonstrations in France against the pension reform bill [fr]. Similar demonstrations have been taking place since early September, but these have been isolated actions carried out by private or public sector workers from various fields. On October 12, the strike took on a new dimension: trade unions decided that the strike would be renewable each day by a vote of workers. So France has shifted into lower gear. Oil refineries have been blocked, the SNCF railway and mass transit lines have been affected by the protests, and striking air traffic controllers are causing paralysis in plane departures. In the halls of Parliament, the 1200 amendments filed by opposition parties of the Left are slowing down Senate procedures as they continue to be debated.

In addition, some new players took the field in early October alongside the demonstrating workers—high school and university students. The UMP, the party in power defending its pension reform, is reminding them however that this reform was made to meet their needs and that most of them have not had a job yet. So why are so many of them taking part in these demonstrations, with such energy and determination? On September 25, the student union UNEF called on students to protest and to increase their participation, as did SUD Etudiant and the FSE (two university student unions), as well as the high school unions UNL and FIDL, who called for the organization of general assemblies in late September for the strikes in October. Prior to the October 12 strikes, there were very few high school and university students involved in the protests because they had just begun their school year and the strikes were taking place only sporadically. But since October 12, when the strikes became renewable, students have been having no trouble blocking their high school or university. As a result, on October 19, between 379 and 1200 high schools and between six and 20 universities were disrupted or blockaded.

The debate took a significant political turn after Ségolène Royal, member of the major opposition party, the Socialists, spoke on TV on October 11. The next day, the opposition turned against her, pointing to the swarms of young people now entering the fray and accusing her of inciting youth to take to the streets for a reform they don’t understand. Shmilblick also joined in:

Like most high school students (and we’ve all been there), they are sheep manipulated by high school officials who are trying to get media attention in order to carve out a space for themselves within a political party in a few years (examples abound), it’s true that at that age, they like to take part in these demonstrations and tell themselves that they are part of something.

But in reality, it’s ridiculous to go demonstrate against work when you haven’t even begun to do it, particularly since the longer the reform takes, the more young people will suffer from it in 40 years, only in France do they not understand that.

In his blog, La boîte de Guillermo (Guillermo’s mailbox), Guillermo plays down Ségolène Royal’s role while knocking her down at the same time:

People are still wondering today. Why are high school students striking? For retirement? It can’t be, three-fourths of them don’t even know what trade they’ll be in later on.

There was a time when they listened to Ségolène Royal. She held political meetings and fought Nicolas Sarkozy for the presidency. At that time yes, young people were behind her (I’m speaking about well-adjusted young people, of course; other youth followed Nicolas. But all you had to do was look at how they dressed and listen to the way they talked to understand that those young people were already very old). But what high schooler listens to Ségolène Royal now?

So I’m shocked by everyone who was proclaiming loud and clear yesterday that Ségolène Royal was a has-been, and by everyone today saying with disappointment how shameful it is that she’s having a harmful effect on youth.

A strike at a high school is a little like having vacation come early, especially when it’s nice out. You start out in a procession, you finish up at a café with a cup of cappuccino and a group of friends. With a bit of luck, you can even get to know that gorgeous brown-haired guy who’s been looking at you in English class, or the beautiful blonde who always sits at the table near the window in the library.

Thus many people think the students’ motivations are weak. However, they have the right to express their objections to this reform, especially since they will be in the labor market very soon. A charter published on the blog révoltescolaire and signed by numerous political trade unions, as well as high school and university student unions, lists young people’s demands:

The increased duration of an education and an increase in the average age of entry into stable employment (age 27) are causing young people to start contributing to pension funds later than in the past. We demand:

• validation of years devoted to studies and training in calculations of years of pensionable service leading to eligibility, so that every young person is guaranteed the ability to study without being worried about his future, no matter how far off;

• validation of internship periods, integrated into a real and binding regulation (compensation at 50% of minimum wage starting with first month, recognition and coaching during training);

• validation of periods of forced inactivity, and consideration of the circumstances of young people who have found an occupational placement but for whom successive internships, limited-term contracts, part-time employment, temporary work, or unemployment lead them to accumulate very partial retirement benefits

Beyond the effects of this reform, it is the frustration that these young people are feeling about their present and their future that is being expressed: schooling that takes longer and longer and grows more and more expensive, problems of access to housing, an increase in unemployment (employment rate of 31.4% for ages 15-24, in 14th place in European Union), professional insecurity, decrease in purchasing power, widening gap with upper classes…the pessimism of French youth is ubiquitous.

The youth of France no longer believe in the future, this feeling has an activating force, it becomes a self-fulfilling prophecy, a belief that is actually translated into fact. Pessimism among the young is leading the age group that should be the most adventurous, the one that is supposed to symbolize risk-taking, to act cautiously, precisely the behavior that inhibits society where they should be shaking it up. At this rate, we will soon be able to say, “Keep running old folks, the young people are right behind you. Demonstration in Paris – Image by CastorJovial on Flickr CC NC2.0

Faced with a sense of not being heard, young people are becoming radicalized. And the youth can be frightening,   because they are capable of gathering spontaneously in varying degrees of organization via social networks (example of a Facebook message here). The police are no longer hesitating to hold back the demonstrators. On October 12, a young demonstrator received a serious head wound; on October 14th, in Montreuil, a high school student was seriously wounded in the eye by a flash-ball. As soloon predicts in a commentary on the article:

We have all the ingredients for causing the protest movement to harden its position. The generation gap is over, all united in the face of the same enemy who spreads terror with its armed thugs in uniform

I’d like to extend my warmest thanks to the police officers who shot at high school students with flash-balls, without that monumental gaffe, it may not have been possible

From that day on, each day of demonstration saw violence, orchestrated by individuals mixing in with the demonstrators at the protest sites (particularly around high schools), all across France. October 18 and 19 were particularly violent, especially in Lyon and the Paris region. Thus people are pointing a finger at the student movements and marginalizing them, accusing them of not guiding their movement properly, while the students themselves criticize an excessive police presence. That, at least, is how the foreign press is reporting this social conflict, broadcasting mainly images of urban guerilla warfare and giving very little press to the reasons and motivations of the demonstrators.

Questions to parliament: the highlights!
Uploaded by LCP-AN. – News videos from around the world.

We will see how this conflict develops, with the government remaining inflexible in its desire to pass its reform bill, despite the disapproval of the majority of the French. As for the student demonstrators, the vacation period beginning on October 23 may remove them from the demonstrations. 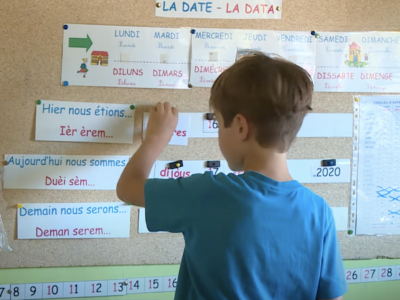