Guinea: At Long last, a Date for the Second Round of the Presidential Elections

On August 9, It was with great relief that Guineans learned that the President of the transition, General Sekouba Konate had signed a decree for the second round of presidential elections to be held on September 19 [Fr].
The date was initially scheduled to be sometimes in mid-July then in the first weekend of August, but due to challenges from 23 of the 24 first round presidential candidates, the Supreme Court needed more time than expected. The Supreme Court explains its decision about the delay and suggesting a new date to the CENI (Commission électorale nationale indépendante), as reported by guineeenligne.net [fr]:

The Supreme Court, the highest judicial court of the country authorizes the CENI, the National Electoral Commission to extend the deadline set by law to hold the second round of the presidential election. The Electoral Code stipulates that the second round must take place 14 days after the publication of the official results of the first round, which was held last June 27. The results had only been formalized on July, 20th and the second round should have been held on August 4.
It was after this crisis of confidence between CENI and some of the candidates in the first round of presidential elections on June, 27th that the institution wanted to make sure to sort out the charges of theft of ballots andballot boxes and the forging of results. Among the most critical candidates had been Sidya Toure, who came third in the first round. Supporters of the leader of the UFR (Union of Republican Forces) explained on their Facebook page:

We reject these results, which do not reflect the outcome in the polls. It does not call into question the process, but the Department intends to exhaust all the options the law allows before accepting the results of the elections.

Monday, July 5, all dressed in red, went out in the streets in some neighborhoods of the capital to protest against what they called, with a good dose of bad faith, fraudulent manipulation of the results that their leader is the victim.

Sidya Touré himself used harsh words against the interim President, who was so upset by the attacks that he threatened to quit his position as leader of the transitional government.

Another former prime minister, Lansana Kouyate, who arrived fourth in the first round, also made critical remarks against the CENI, through his spokewoman, Zalikhatou Diallo. Here are his words as reported by Magbana on the blog Guineaoye:

We found massive fraud in Conakry and its municipalities — Matam, Ratoma, Matoto — and in Siguiri and Kankan,” two cities in Upper Guinea, said Zalikhatou Diallo, campaign director for Lansana Kouyate, leader of the Party of Hope for National Development (PEDN).
In Conakry, Matam, Matoto and Ratoma, ballot boxes disappeared (overnight) only to reappear in the morning. There has also been stuffing of ballot boxes” in the polling centres, she said.
In Kankan, Diallo alleged there were false polling stations and in places more votes were counted than there were registered voters. She also added that in Sigiri, there had been “fraud and ballot-stuffing as well as voter intimidation and instances of multiple voting”.

On August 2, Prof. Alpha Condé addressed a letter to the Acting President that was reposted on the blog guineelibre.com and cosigned by the leaders of the parties that support him, asking him to simply dismiss the President of the Independent National Electoral Commission , its director of planning and of operations. In the letter, Prof. Conde and party leaders on his side argue the following:

It seems unacceptable and even outrageous that the CENI had made no reasonable efforts to pass the Court minutes of constituencies as important as those of Kankan, Mandiana Lola Ratoma and Matam, while the transmission is in the case law and its responsibility, whether or not electoral dispute.

These complaints have been followed by legal actions against the Director of Planning of the Independent National Electoral Commission El Hadj Boubacar Diallo. According to information released by ondes-guinee.info, Diallo was due to appear before the Court of First Instance of Dixinn on August 12 to answer these charges.

The Prime Minister of the transition, Mr. Jean-Marie Doré, former spokesman of the Forum des forces vives (grouping opposition parties, trade-unionists and civil society movments), had also expressed his reservations on the shortcomings of the CENI and the date of the second round. The conakrynews.net blog reports the prime minister's views on the imperfections of the electoral process so far and what the CENI should correct for the second round:

To fix the date of the second round, Jean-Marie requires to correct « deficiencies, deficiencies and excesses that occurred during the first round, are placed so that everyone can say that the maximum has been done to that the election be transparent. For the transparency of elections requires that all acts required by law to be performed.

All these complaints against the CENI have caused concerns within the international community, which is following the evolution of events in Guinea with special attention since the violence of September 2009 perpetraded by military against the civilian population.

Many African personalities visited Conakry to convince the political players to go forward with the electoral processus: J. Ping, President of the Commission of African Union, Amadou Toumani Touré of Mali, Blaise Compaore of Burkina Faso, Abdoulaye Wade of Senegal. Even US President Obama urged Guinean citizens on August 7 to make sure that their first free presidential elections is a successful one by holding a peaceful second round.

On Guineaoye, Mr. Compaore urges the CENI to hold the second round as quickly as possible. He says if you allow a lot of space and time between two rounds of voting, new complications can arise that disrupt the electoral process. He says Guinea is setting an example for other countries and should not let the opportunity slip through its fingers.

Still, Guinea is not far from disaster when one considers the division between the principal political agents. The first round results showed that voters had voted mostly based on ethnic groups rather than candidates’ programs. Alliances between former candidates have divided the country into two blocks that are getting more polarized everyday.

The trend is that the second round of this election seems to have divided the nation into either good or bad citizens, depending on the beholder's point of view. This division may be more profound than ever. Formulating an opinion right now in Guinea is often met with skepticism by key players.

The shortcomings of CENI are mostly due to poor organization, lack of training of electoral officers and the fact that political parties did not play their role properly. For a better preparation for the second round, the site guineelive.com, informs that CENI is taking the following steps:

CENI signed an agreement with the International Foundation for Electoral Systems (IFES) for additional training for members of polling stations for the second round of the presidential elections to address shortcomings noted in the first round. The aims are to enable members of polling stations to ensure properly their roles and responsibilities and can drive perfectly techniques of voting.

Now it is for all parties to play their part and train their representatives in order to ensure that the Guineans elect a president without legal complaints from the challengers.

[For more background on the Guinean elections, here is a recap of the events from the death of Lansana Conté to the start of the electoral process and a review of the first round of the elections]. 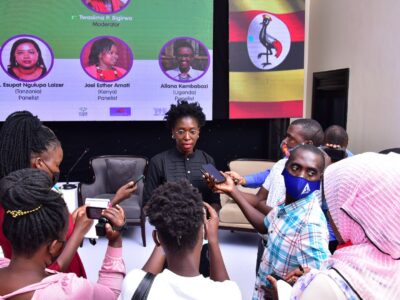 The event gave women affected by COVID-19 a platform to share their experiences on existing inequalities resulting from unpaid care work and to encourage public discourse on the topic.