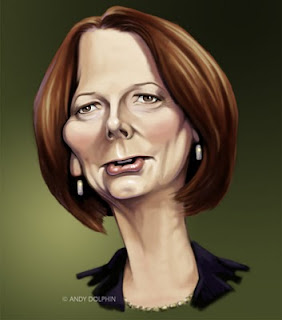 Just twenty-three days after deposing Kevin Rudd, our ranga (redhead) Prime Minister Julia Gillard has called a general election for 21 August. The Oz blogosphere is looking for substance not just spin in this campaign.

Guy Beres in his self-tilted blog hopes that the campaign will go beyond sound bites and catchcries:

In her noon press conference announcing the election date, Julia Gillard was organised, precise in her language, and confident. She looked and acted like a Prime Minister. She was convincing, but her mindless re-iteration of Labor’s election mantra du jour, “moving forward”, felt forced and was truly grating.
Game on for Saturday 21st August

It's a corny phrase already making people grind their teeth, less than 24 hours after the election date of August 21 was announced.

But he is more concerned about the role of the mainstream media in supporting the dominance of the two party system in Australia:

It's about Gillard & Abbott doing everything they can to stop The Greens from gaining the balance of power in the Australian senate, and completely undermining the two party system that has served Australia's richest people so faithfully for so many decades. It's fortunate then that the Labor Party and the Liberals/Nationals coalition can rely on the full support of the Australian Murdoch media doing everything they can to scare people away from voting for The Greens.
Standing Up, Moving Forward, Falling Asleep

Wooly Days‘ Derek Barry was also worried about the media’s role in the political debate:

The problem for journalism is that most journalists are employed by corporate media. The single biggest threat to democracy is the corporation itself with its profit motive subsuming all other motives to the fatal detriment of the body politic. That means large numbers of lobbyists, PR flacks and lawyers working only to make more money for their company. People who don't see society, only consumers.
What if they gave an election and nobody came?

Mia Freedman at Mamamia blogs about ‘pop culture, politics, body image, food, motherhood, feminism, fashion and celebrity’. She has other concerns about the way the Prime minister may be presented in the media:

It only took a few days and now the first conservative columnist has sounded the alarm bell: parents, lock up your daughters. We have a Prime Minister who is living in sin and she’s going to corrupt the kiddies.
Really?
PM Julia Gillard is a bad influence because she’s in a defacto relationship. Wait, is this 2010?

There have also been suggestions that Gillard’s atheism may be a factor in the election but few bloggers have tackled this one head-on as yet.

@laepingjudas – unhinged and uncensored canvassed the potential impact of the PM’s personal life:

I don’t give a toss that she is a woman (or more importantly, a ranga), unmarried and childless – how do any of those things impact on the ability of a person to conduct themselves in the best interests of the nation?

They don’t, but we are, of course, going to see the tired old clichés that revolve around such issues wheeled out ad infinitum by the unthinking majority; particularly those of a conservative bent.
Julia Gillard – a ranga atheist Prime Minister… who cares?

So poor old Julia trotted out to an event wearing what critics call a cheap motel bedspread. Sure it wasn’t to my taste, but what a way to shoot a girl down. She tried, she failed and now they’ve brought in every fashion consultant in the country to give her advice.
What’s Julia wearing today? Should we even care? There’s an election coming up for heaven’s sake.

The question of her being Australia’s first woman PM has certainly been raised, as indicated in my earlier post Australia: Dramatic Fall of Prime Minister Kevin Rudd.

One disaffected blogger tried to explain to his young child why the former PM had disappeared from the TV screen:

I'm stumped. I want to give her a neutral take, let her get all the positives from seeing a woman in a position of power. Despite my own disappointment at the consummate sell-out she, and Labor, now represent …
3 year old politics: ‘Where's Kevin Rudd?’

This rather cynical comment on Paradise Feeds greeted the news of the election:

Grog’s Gamut was just as cynical about political spin and the PM’s sloganeering when analysing her announcement speech:

There’s not much point analysing the words – they’re focus group dross. Such speeches always are.

Enjoy the next 5 weeks; just don’t expect logic and political fortitude to play a big role.
Election 2010: Day 1 (or let’s check with a focus group – it might be Day Zero)

Landscape artist Andy Dolphin used his art blog My Week in Art to give us his caricature of the new PM:

For several weeks I've been attempting to capture her in a caricature without going for the obvious profile shot with the exaggerated nose as the focal point. Despite what this news story might imply, there's more to Ms Gillard than her nose.
Julia Gillard: Digital caricature

The caricature is the one featured above.