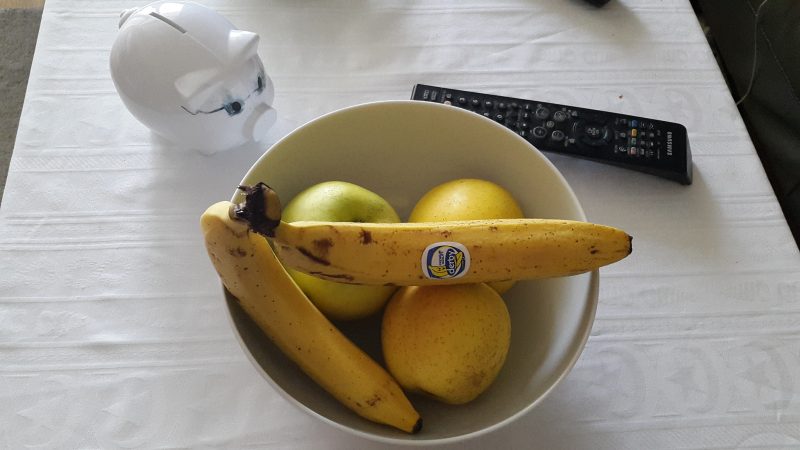 Bananas and apples in a jar. Photo by GV, CC BY.

Kopach, a columnist for the independent portal Okno.mk, published a list [MKD] entitled “10 Ways to Run a Banana State.”

The author, whose pseudonym means “Digger” in Macedonian, wrote that he was inspired by and used the books Year 501: The Conquest Continues by Noam Chomsky and Homo Postcommunisticus by Mikloš Biro (a review in Serbian), and the essay Eternal Fascism by Umberto Eco.

Step 1: Treat them as monkeys

The first and basic precondition in order to start any kind of discussion about running a banana state is to constantly make monkeys out of the citizens. There are different ways to go about it, but in practice it all boils down to treating the people as incompetent, inert and passive rabble, until it becomes just that: passive and inert rabble, interested only in its own belly. You have to put the masses in a corner and teach them that it is their place, making them pleased with that condition, because they are free of all social responsibilities.

We know from history that even the Cossacks choose their leaders through democratic elections: the elders would elect a leader called Ataman at a plenary session (it sounds like a Hollywood movie, doesn't it?). This democratic legitimacy did not hinder the Ataman to practice his right to cut off the heads of members of his tribe as he saw fit during his reign. Similarly, in a banana state everything must revolve around the Leader, or the Leaders, because it is impossible to put everybody into one political tribe. The Leader is elevated above the others and demands awe.

The masses must have no self-confidence, self-respect or opportunities for self-realization. Simply put, they must not be able to do anything on their own. Working at one's own initiative can lead to understanding that one can achieve something without the leaders, and realize one's own abilities. The masses must not develop self-respect in regard to the concept of determining their own fate through honest labor. Everything, literally everything, must be given or delegated to the masses: jobs, awards, kick-backs, permits, concessions, tenders, and university degrees. There must be no exceptions in the distribution of societal benefits based on fair procedures or merit, outside of personal judgment and personal control of the Leaders.

Step 4: Give them candy

Part of this strategy for running a banana state is to refer to the masses as “gentlemen” (or brothers/sisters/comrades…) and at the same time to stuff them into a pen whenever you like. The approach of the rider that gives some sugar to his mount should be applied, to buy the obedience and affection. Afterwards there are no questions regarding the actual riding and conducting.

The basic precondition to running a banana state is dividing the masses, weakening them by antagonizing them against each other. Another important benefit of this approach is the control of the masses’ attention. If you generate problems in the country in a conscious and planned manner, you gain several advantageous elements:

In the past, the grandiose pharaohnic ventures had the goal to ensure eternity and permanent trace in the collective memory for the leaders. Even though one should not underestimate the act of marking history with a personal stamp, an important dimension of grandiose ventures (projects, buildings, campaigns, events, construction, etc.) today is increasing the influx of means, money and other resources, and creating a range of opportunities to allocate them and distribute them as you see appropriate. Increased flow of resources makes it easier to direct them where you wish. Alongside other effects, this dynamism of money enables you to estimate where, to whom and how much to give, attaching the recipients to you.

In order to develop awe among the masses, you must gradually plant controlled doses of fear into them. The way to do this is through selective presentation and propagation of fear-inducing scenes and events. The most frequent method to do this is showing how your opponents and unlike-minded individuals end up. A subtler method is excessive or overdosed use of force while dealing with small-fry opponents, criminals or suspects. Demonstrate force on the weaker to achieve an effect of awe, combined with subconscious submission and passivity.

The popular term for this is driving them mad. Embedding irrationality into public life has the function to push out rationality that should clarify reality. The more the citizens drown in irrationality, affects, atavisms, instincts, and passions, the easier it gets for you, and the harder for them to come up with proper solutions, to differentiate the real from fiction, the existing from the imagined, truth from falsehood. You drive people mad by a simple performance of illogical acts, against reason, logic or realistic assessments. When irrationality becomes the principal norm instead of an exception, the games called manipulation may begin.

Step 9: Determine and name the enemies

To maintain your position of untouchable and undeniable leader you must transform the fear into different forms and spread it in various places. One of the ways to do it is to directly and clearly name “enemies,” “traitors,” and “opponents,” who threaten with some unbelievable radical change, act or deeds which can turn your world upside down, and soil something that you hold dear and sacred. To become a superhero you need an antagonist: for every Batman there is a Joker, every Superman has his Lex Luthor, and every Martin Mystery has his “Man in Black” [not the Will Smith kind], and so on. You need to combine this with forcing and circulating an atmosphere of conspiracy and angst through “spreading fear in doses” (7), making you the savior from the labeled enemies.

Rituals remain one of the most powerful practices of spontaneous spreading of the power from the top. During the ex-Yugoslav era, the Communists perfected this through various rallies, youth work actions, relays, parades and the like. There are numerous ways how this can be passed in pluralistic societies: from politicization of religious rituals, various “bene-volent” actions, politicization of sports events, and other things along those lines.