International Women's Day is not an official public holiday in the Republic of Macedonia, but is widely observed through interpersonal interactions and at some workplaces, through sharing of small gifts or organizing celebrations. This year, a number of bloggers used the occasion to draw attention to gender issues or for congratulatory posts aimed at women in general.

From March 5 to 8, UNIFEM office in Skopje organized

…the first film festival in the country dedicated to women’s rights and gender equality. Under the title ‘Women’s Rights Nights’ the four festival nights combined: screenings of documentaries developed by women directors that are portraying life stories of women and girls, and debates on related topics.

Incited by the debate on women and tradition/religion after the screening of the film “Look at the World Through My Eyes”, gender expert Kristina Hadzi-Vasileva reflected [MKD] on her blog feministik:

…The discussion strayed toward the issue of wearing a hijab and [whether such a choice is personal or a result of conditioning]… We seem to forget that the headscarf is just a part of the external markings of religion, and that religion is a component of tradition. Religious rules play a large role in forming lifelong habits which pass from generation to generation as “tradition.” In that context religion and tradition gain a new aspect, as they become included in the community's cultural identity. And that is the essence of the problem: how to change/better the life of women when the change involves the overly sensitive issue of identity.

In this case, religious norms mark the cultural identity of a woman's community. The punishment for disrespect of the community can range from being branded as traitor and excommunicated, to punishment by murder. We have to ask how can a woman decide to change her position in society when the risks involve loosing her children, family, loved ones, home, money… or being mutilated or murdered.

Women suffer pressure and control because they are charged with carrying on the identity of their community to the new generations. Women are expected to maintain the cultural identity by giving birth and basic education to the children, therefore they are under pressure to fulfill certain norms – to dress and marry in a proscribed manner, to have certain number of descendants, to eat, drink, work, move and live in a certain way – or else.

We also have to clearly distinguish between the basic meaning of religion as spiritual need and comfort, and fundamentalism.

Fundamentalist movements seem to have grown into the most important social movements worldwide lately. In fact these are political movements with dominant religious or ethnic imperatives. According to [British scholar] Nira Yuval-Davis these can be based on holy books or experiences related to charismatic leaders, presenting themselves as the only valid form of religion, ethnic culture, the truth. Fundamentalism can manifest as upholding traditional values or as return to the true/original sources…

Fundamentalist constructions of social order essentially rely on control over women and the patriarchal family model. Paradoxically, some women find comfort or sense of accomplishment or empowerment by fitting into the fundamentalist movements. Even though they have the lowest status in the religious institutions, women remain their most active members, acting as guardians of the emotional and moral well-being of the family (NYD). Religion can also be a way for women to find place in the public sphere, or for self-realization of unqualified female workers.

Fundamentalist religious and political leaders consider the ability–the right–of women to control their destiny and bodies as direct threat to their authority, and very few women would dare to act in a way that would mark them as betrayers of the holy religion and/or customs.

If [in this context the word] religion is used as synonym for fundamentalism, and fundamentalism is politics, we have to conclude that its the politics that prolongs the oppression of women in Macedonia.

Under this constellation of forces it would be too much to expect that every woman have to fight for her freedom on her own, as some disputants noted. Help is needed, but is it welcome?

Hemicharot [The Chemist] quoted the Bible (Corinthians, 11) as an example of a backward tradition and ranted against the shortsighted right-wing-Christian female bloggers, ironically wishing them fulfillment of their ideological prerogatives of “many babies, personal and family success of their pillar in life [the husband], and pleasant Easter fasting during the organized parties with ancient Macedonian newly-composed music.”

These celebrations are considered a ‘remnant of communism’ but continue to be practiced in earnest by the public administration (run by political parties which declare themselves anti-communist) and some time escalate beyond providing a free meal for the female staff, into women-only excursions abroad. For instance, a weekend tour of Istanbul, as organized by a public enterprise from Skopje.

Referring to another aspect of this phenomenon, kuzevski asked via Twitter:

Why everybody thinks that 8th of March is the [only] day when a woman has the right to go out to a restaurant without restrictions from her partner?

This is the way of older generations who cannot give up socialist habits. I don't know any contemporary women who celebrate the 8th of March in a restaurant :)

Singing Skopjans released a cover of Yugoslav New Wave anthem [“She's waking up”] as a reminder that “8th of March is not a day for flowers, restaurants and shopping, but a day to celebrate women's rights… and to start thinking about who, how and why creates policies without taking the female factor into consideration, from anti-abortion campaigns, to campaigns to create mothers of the nation or projects to erect monuments exclusively to males.”

In the meantime, the anonymous author/s of the new blog Happy 8th of March [MKD] posted photos of several street sculptures of “trendy girls” with “ideal,” Barbie-like proportions, installed by the Ministry of Culture in the center of Skopje. Someone accessorized the statues with books and labels saying “I am not a sex object,” “I got a scholarship for Harvard,” and “Nobel Prize Winner.” 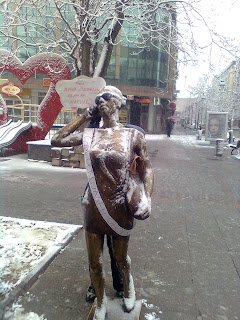