Thousands of people were moved out of threatened areas after two dams burst in Kazakhstan on Thursday and Friday. The tragedy has taken place in the Aksuisky district north of the country's business capital, Almaty. KZBlog reports:

Thursday, a dam was washed away in the Karatalsky region of Almaty province after heavy snowfall melted. 820 people are currently being sheltered in a nearby school. Friday another dam burst at the water reservoir in the Aksuisky region. Kyzyl-Agash, a village with 3000 people, was flooded. Many evacuated in time, but not everybody.

Over the weekend, the number of people killed rose from 20 to 35, and more are missing. As of Monday, the confirmed number of victims is 47. President N. Nazarbayev has charged the general prosecutor's office to start a criminal case against the owner of the burst reservoir “Kyzyl-Agash”. As it became known after the flood, both the reservoir and the dam were in private ownership.

Lord-Fame has the most comprehensive coverage [ru]:

The big water came. We were warned, we have had to be prepared. At 1 a.m. police came to the village near Taldy-Korgan [a town in the Almaty region] and forced the people to evacuate. And it was the right thing to do.

In Kyzyl-Agash a district police officer visited the households and warned that the dam might not stand the big water. People started to take children and women away to nearby settlements. In the evening the head of district administration came, urged to stop panic and said that everything is under control. People believed him. Many of those, who believed are now dead […] The formerly successful village Kyzyl-Agash now looks like this 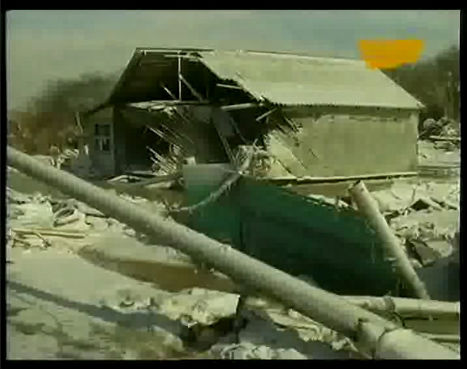 The dam burst due to precipitations and melting flood water. The telephone lines are not working. Water also destroyed the Kyzyl-Agash bridge on one of the major South-North highways. Lord-Fame continues [ru]:

Residents of Egen-Su, another village downstream, were fully evacuated in advance, but the cattle is dying massively […]. In Kyzyl-Agash the tragedy could have been avoided, if the authorities organized timely monitoring and alerting. The local head of administration was afraid of a panic… Why wasn't he afraid of deaths?

Most of the evacuated people are currently placed in army barracks, schools and train station in Taldy-Kurgan. The local TV Channel calls on the people to help out with the food and clothes.