The story of one of the most successful Hungarian citizen campaigns started at the end of last year when dedicated citizens and NGOs revealed to the mainstream media that a member of an international company presumably got permission to expand their shopping mall (Auchan) on the outskirts of Dunakeszi (a town close to Budapest, the capital), on the basis of a false examination from the National Inspectorate for Environment, Nature and Water of Hungary. 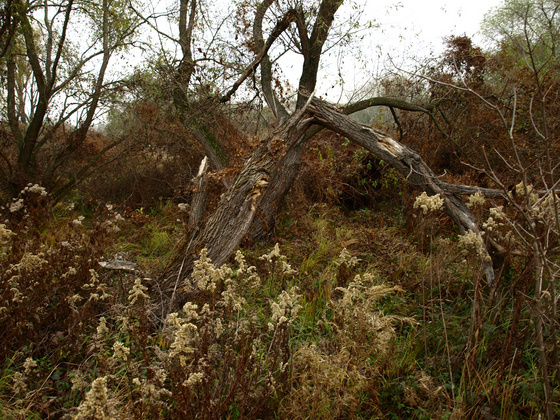 Groves in the Dunakeszi marsh, photo courtesy of Péter Pacsuta

There is something in Dunakeszi that is special. An “invisible” marsh. The interest of the shop with the bird sign made it invisible, because money dictates, while the trees, the bushes, the bugs, the birds are such outdated stuff.

We find the peat ponds of Dunakeszi at the northern border of Újpest, on the same line with Dunakeszi-alsó train station. The swampy, marshy area used to run from the Mogyoródi brook to Dunakeszi, dotted with small ponds. The swampy area and the masses of mosquito species kept humans away, so the wildlife remained untouched – except for anglers and holidaymakers, nobody disturbed the silence of the nature.

Then came the MAN. In the first half of 1998, because of the construction of the M0 motorway at Káposztásmegyer, the grounds of the area with bushes, willows and aspens were chopped down, the greenery was burned down together with the animals living there, and the small ponds were banked up. Of course by a foxy manner: they were waiting for the environmental permission, but they were constructing at the same time. So when the letter of the authority arrived, declaring that it was not allowed to build there, the road was almost ready. The penalty of a million or so was probably easily paid. (If there was any.)

As memory from the marsh only a small part remained, two small ponds with groves of bushes, willows and aspens around, but now it's marked out by Auchan for building a parking lot. For this it must be certified that at that place there's no marsh, because if it's on the contrary, the area is considered protected, no parking lot can be built there.

Checkmate. Or rather, foul play!

Since the expert witness asked by the National Inspectorate for Environment, Nature and Water “certified” with soil samples that the habitat in question is totally dry, it's not qualified as marsh. […]

Contributors of the campaign against the constructions lead by Dr. György Kriska, Dr. György Szollát and by the organizations, Live Chain for Hungary (Élőlánc Magyarországért, HUN) and Dunakeszi Peat Pond Environmentalist Foundation (Tőzegtó Környezetvédelmi Alapítvány), prepared a map which shows the planned construction area in green and marks the places where video documentation has been made.

One of the most viewed videos on the marsh is with an activist who's summarizing and reviewing the accuracy in the report of the expert witness of the inspectorate while standing right in a peat pond: “The expert made prospect holes and he observed that in the area of the prospect holes the soil is sandy and dry. I am now close to one of those prospect holes.”

Dr. György Kriska launched a website (HUN) dedicated to the Dunakeszi marsh, where he collected media mentions of the conflict, shared detailed research and photos about the flora and fauna of the marsh and its peat ponds. Also a Facebook page (HUN) titled “Let's save the Dunakeszi marsh!” has been created.

Droli of Hiper, a blog dealing with shopping malls, highlighted (HUN) the other side in the debate, though he emphasized that destroying the environment is not a solution:

It must be admitted about the Auchan at Dunakeszi that it's a shopping mall with bustling trade, it's not an exaggeration to say it's among the first three in the country, too. So the people like the Dunakeszi Auchan. And that's where the troubles start.

Most of the people arrive by car, since the Dunakeszi Auchan is located at the end of the world. A solution would be a bicycle or a shopping tricycle, but we shouldn't have doubts, we know the transport culture of our compatriots, drivers and bicyclists would swear on each other, so it's not realistic. […] On foot it's far from everything, and we are familiar with BKV [public transportation]… So it's not by chance that customers arrive to the shopping center by car. The mall can say: I have to solve the problem, the parking lot is full, what should I do?

However, it doesn't authorize them to destroy a wonder of nature! […]

Pacsker, the blogger of Greenr, has also been supporting the campaign for the marsh: he has dedicated 14 posts (HUN) to the case. In his second post (HUN) about the marsh, he shared his vision of how this debate would affect the society:

[…] I'm saying that this marsh will set a precedent and unite the society – from the blogger to the environmental engineering student, to the tabloid press, to the higher leadership!