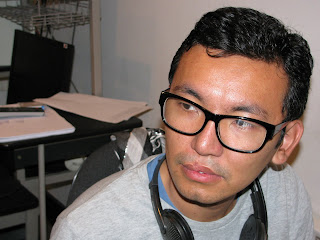 Sayat Shulembayev, 28, journalist of the news video-portal “Stan” was brutally murdered in Almaty. As “Stan” producer Michael Pak says, Sayat rented a room in the house near bus station. The murderers killed the landlord and the journalist, apparently, to eliminate the possible witness [ru]. The news portal does not link the murder with journalistic activity of the victim.

The bus station neighborhood is considered as one of the most criminal in the former capital of Kazakhstan. It is believed that the landlord had some crime affiliations. Several days before the murder he had received threats and he warned Sayat, but the journalist did not take it seriously. The young man received multiple stabs while he was sleeping.

I knew him and saw recently at the theater. Gosh, you never know when you see a man for the last time in life. I'm speechless. As his colleague says, “this is not for his reporting. He just lived in a bad neighborhood. And this fact makes the tragedy even scarier.

We knew each other from the school. He was so happy to move to Almaty [from Semipalatinsk, a province in the north-east Kazakhstan], proudly told me about his work in advertising and later in journalism… Rest in peace

Luginka, a colleague of Sayat Shulembayev, writes in her blog [ru]:

He could be intolerably snobbish and sarcastic. He wanted to be a man of fashion and loved parties. He had caustic jokes, but he could get hurt by a joke easily. He read smart books and acted defiantly.

Today his desk was shot by all TV stations. People write their last farewells in “Vkontakte” [social network]. News agencies in Kazakhstan and Russia report on the murder and hint at political motives. But this was just a regular crime, and it is even worse in its absurdity.

He was in the wrong place and time. He rented a room in the bad neighborhood, probably, because he was sending most part of his income to his relatives. The landlord got deadly problems, and Sayat was sleeping in his room. He wanted to move to another apartment December 30. The last sentence that he says in his last reportage was: “The whole life is ahead”.