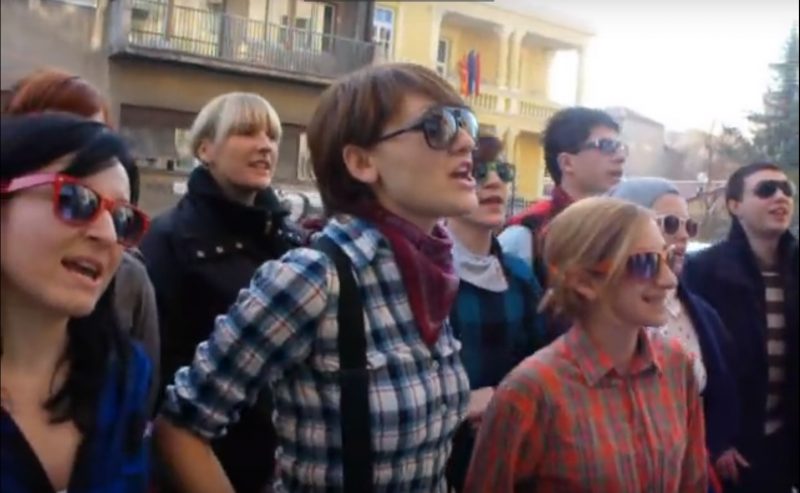 An ad hoc choir “Singing Skopjans” (Macedonian: Распеани скопјани in Cyrillic and Raspeani skopjani in Latin alphabet) consists of citizens of Skopje who express their opinions on social matters through songs. The singers meet every Sunday at different locations throughout the capital of the Republic of Macedonia and shoot a music video, to be uploaded on the YouTube channel of the civic activist group Ploshtad Sloboda (“Freedom Square”).

The choir uses humor, which is reflected in their repertoire. They performed children's song “We are Macedonians” (Ние сме Mакедонци) [MKD] at the public holiday of the Day of the Macedonian Revolutionary Struggle, and had a performance in front of the Greek Liaison Office (a de facto Embassy of Greece) with the song “Dirlada” (Дирлада) [MKD] about summer love of a Macedonian boy and Greek girl who encounter difficulties due to visa restrictions.

On a grimmer note, the Singing Skopjans also sang “Kill me” (Убиј ме) by the local band Bernays Propaganda, which includes these lyrics:

…in order to comment on the events of beating up student protesters on a Skopje square a few months ago.

The latest performance includes the Lumberjack Song by Monty Python, related to the cutting of the old trees on the Ilinden Boulevard, an act of Skopje's mayor which caused a lot of anguish and frustration [MKD] among ordinary citizens several months ago.

The word about this innovative commentary source has been spreading mainly through social media, especially through Facebook, and after a few weeks caught the attention of the traditional media: Dnevnik daily published an article about the choir [MKD].