Israel: For the Love of Food

With the Jewish High Holidays approaching, food seems to be on everyone's minds. The Jewish blogosphere is ripe with sumptuous tidbits and contemplations about the cultural implications of food, food and identity, and the history and culture of our favorite culinary delights.

In his blog What War Zone??? Benji Lovitt amorously describes Israeli cuisine and the rude awakening of eating American food on a recent visit to his native United States.

I love Israeli food. LOVE IT. It's healthy, it's delicious, and have I mentioned the vegetables? Holy falafel balls, I ate SO MUCH GOOD CRAP my last few weeks in the States and finished every other meal with some combination of regret (“What have I done???”) and hangover (“Whooooooooooaaaaaaaa (hand on stomach)…..I am NEVER doing that again.”)

Ashley of I Googled Israel picks up Lovitt's conversational thread in a blog post entitled, “Felafel: The Legend, the Myth… the Chickpeas.”

[Photo: Sourced from I Googled Israel

Doesn’t sound or even look like much, but if Israel has adopted a national food, this is it, the mighty falafel. The fish and chips of the Mediterranean, the tapas of the Middle East.

Along with providing tips on where to find felafel, and how to eat it when you get there, Ashely lends insight into the food's trans-border migration to Israel.

Falafel, despite its strong connection with Israel, actually originates from Egypt, and was originally made from faba beans. Its roots can be traced right back to the Christian Copts of Egypt who were forbidden from eating meat during certain holidays and came up with a falafel-like alternative.

But maybe we're getting ahead of ourselves. Jewminicana's Aliza Hausman asks us to stop and reflect on what we mean by our labels and whose and what types of food are included when we talk about “Jewish food.”

Relating a conversation with a friend, Hausman shares:

When I asked a Ashkenazi Jewish friend about this phenomena of equating “Jewish food” with only “Eastern European food,” he said, “I think that it is a symptom of a much more widespread phenomenon…where Eastern European everything is considered ‘the Jewish way'…even in halacha (Jewish law), minhagim (customs), prayers….”

He added, “Although, I would not speak about its as though it's the worst thing in the world, it does hurt and it makes people doubt their own narratives and backgrounds, which is not good…causing ever greater homogenization in Jewish life.”

If you'd like to learn more about the differences between Jewish foods from different regional cultures, Wikipedia's article on “Jewish Cuisine” may be of interest.

If you're not hungry yet, Collective Thoughts of a Ginrod leaves us with this mouthwatering photograph of “Breakfast in Tel Aviv.” 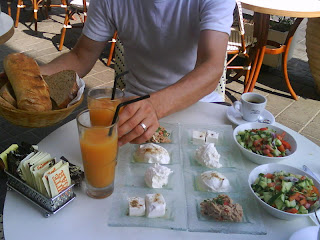 As we say in Israel, “Betayavon!” Enjoy your meal.