On April, 22, a deputy Askarbek Shadiev criticized the advertisement billboard of the Swiss Office for Cooperation [en] during the session of the faction “Ak Zhol” party. Deputy was outraged by the placing the white cross image on the flag of Kyrgyzstan by unknown designer.

There is a big poster in the honor of the 15th anniversary of the Swiss Cooperation Office where the flag of Kyrgyzstan is drawn with a huge cross at the intersection of Mira Avenue and Gorky Street. None of you are probably didn't pay attention. I believe that the government should control such things. Is this a humiliation?, he said [ru].

There is a big cross on our Kyrgyz flag. I think it is unethical and a violation of the law about the Flag of the Kyrgyz Republic. We need to take the matter to court and we will win, Shadiev said.

They could place both flags together, but they shouldn't have drawn the cross on our flag. Our people don't understand, and I think that is offensive, Shadiev added.

In response to the attack of Shadiev Swiss Cooperation Office explained [ru], that the organization received an official permission to use such banner from the National Commission of National Language under the President.

Internet users immediately criticized an unknown designer and posted a photo of the deputy with the flags of both countries as a sign of friendship Kyrgyzstan, Switzerland and Shadiev. However, the opinion of the users was common:

We can see again that the MPs have nothing to do. It would be better to think about our poor retirees and veterans …, expressed [ru ] the general idea Diesel forum user SpaceWalker. 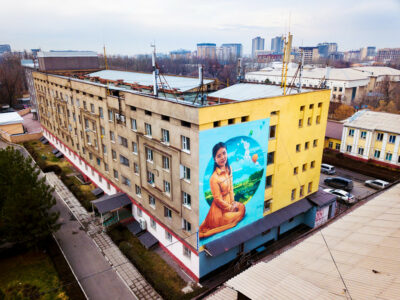