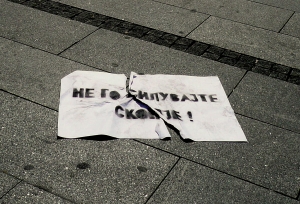 Recently, the Macedonian government decided to build an Orthodox church with public financing on the main square of Skopje, a decision that the citizens of the city disapproved of. In spite of numerous online campaigns and discussions, a group of students – “First Arhi (Architect) Brigade” – decided to organize a protest called “The First Architectonical Rebellion” against the building of the church in Skopje. They set up a Facebook group [mkd] to post their demands. The blog skopje2803 posted a translation of their demands:

1. We demand an official position of the Faculty of Architecture [at the University of] Skopje on developments concerning the city’s public spaces in the interest of society.

2. We demand a professional debate before every key venture for building projects.

3. We demand transparent competitions, announcements, and urbanistic surveys, as well as commissions with representatives and consultants from Macedonia and abroad, NON-PARTY bodies that will decide about such buildings. The final decision must be sanctioned through a referendum, as practiced in European cities in such cases. Until then, a moratorium for construction must be in place!

4. We demand of politicians to – instead of investing in kitsch architecture, instead of building artificial villages for developing rural tourism, instead of drawing up new urbanistic plans, instead of building on extremely inappropriate parcels – to focus public funding on the maintenance of the authenticity and originality of the old buildings that already exist but decay due to neglect.

5. We ask that the citizens wake up, for once think with their own heads, and become actors in the building in their and their city’s future instead of remaining merely passive observers.

Tomorrow at 12 pm, on the square of Skopje, probably a group of gays and atheists will gather and try to spread rubbish under the hidden motive of caring for the architecture of the city, and against the church. Because of that, tomorrow me and my family are going on a counter-protest one hour earlier, at 11 am, and will give our support to the construction of the church!

Similar texts were published on many other blogs.

The protest was scheduled for 12 pm on March 28, 2009, but, before it started, the counter-protesters gathered to support the building of the church. When the two groups met on the square of Skopje, the event turned from peaceful to violent, involving fights between the two groups:

Many bloggers that were at the protest wrote about the incident.

The blogger Harald Schenker from Vision! Come on… posted a full report:

[…] The protest was countered by a mass of up to 1500 church goers, mobilized from all over the country, who gathered to stop the protest from happening. The “spontaneous” and thus not registered counter-protest featured church flags, printed banners, a priest and a lot of people, who have no connection whatsoever to urban Skopje, but who were bussed in from rural areas to fight the Anti-Christ. A large number of expensively produced flyers flooded the city centre – clear indications of a logistically well organized movement. They were in majority, so the actual manifestation remained marginal and actually was about to retreat, when a group of violent hooligans appeared out of nowhere. […] The heated up hooligans attacked individual participants in the protest, using the only intellectual arguments accessible to them – fists and legs. It is almost a miracle that there were only few injuries. […]

All this was happening under the eyes of a stunningly passive police force, which was obviously not able to cope with the events. So they did the obvious – they turned against the protesters. These are now under investigation for not having provided adequate security to their manifestation. No, this is not some sick joke. It is true. […]

The blog Kanalizacija wrote this [mkd]:

Today, a herd of 1000 [Hunzas] didn’t allow us to protest peacefully against the building of the church on the square. They had flags with crosses, icons and posters on which was written “We want temple” and some prayers. Among them there were members of [VMRO-DPMNE], who I know personally.

The people from the Architectonical Faculty, who I joined, were coming from the riverside from the park side. When we arrived at the square the mass started walking towards us, and were whistling and yelling “Uaaa” and “Go to Bakoyanni” [referring to Greek foreign minister Dora Bakoyannis].

If we didn’t escape there was going to be blood! […]

According to the mainstream media, the protests had political background, with the students led by the daughter of the chief of campaign headquarters of SDSM presidential candidate, and on the other side the counter-protesters, who were activists of VMRO-DPMNE.

The Macedonian blogosphere is constantly buzzing about the incident, and almost on every blog post there is a heated debate.