Although couples now marry at a later age than before, some traditions have been slow to change in Christian Armenia. One custom, for example, expects women — but not men — to remain virgins until their wedding night.

However, a recent rally to mark International Women’s Day after which red apples were buried, a symbol of the bride losing her virginity, has prompted intense discussion in the Armenian blogosphere.

While some argue that the action by the feminist movement is long overdue, others consider it an external attack on the main foundation of local culture – the family.

The first post on the rally and the tradition appeared on the OTL Blog three weeks earlier.

[…] While not everyone practices this tradition, as there are different types of classes, families, interests and localities in Armenia, everyone knows of The Red Apple.

When one thinks of it for a few seconds, this is the piercing of a “fruit” by a very phallic and deadly tool. This is a celebration of the woman loosing her hymen. […] The rite itself may be “cute” but the symbols are clearly violent and patriarchal […]

[…] the day was not without its incidents. A group of pro-government bloggers, for example, turned up to mock the event. […] One even said that he believed such marches should be illegal. “Let them march and the next thing you know, narcotics addicts will want to stage their own demonstrations too,” he said.

Equating narcotics use to women’s rights was a little strange, I pointed out, but he remained unconvinced. “It’s not about women’s rights,” he responded. “It’s about destroying Armenian culture and tradition.”

[…] Meanwhile, one small group of activists tried to change something and educate the population that International Women’s Day should be more than about simply handing out flowers.

One of those male bloggers who brought online activism into real-life by infiltrating the female rally was Pigh [Ru] who details how the group counter-protested the march and also takes exception to those covering the march as well as the presence of ethnic Armenians from the Diaspora.

Around us there were some bearded representatives of Armenian diaspora together with spy-blogger Onnik and a bored journalist from the Shant television company who tried to interview us while roaring in hysterical laughter.

The march slowly moved toward Baghramyan avenue under joyful shouts [made by myself and other counter-protestors] “Uzum enq!” [“We want!”], “Hima!” [“Now!”]. One of the participants couldn’t control her nerves [and reacted to us].

[Another counter-protesting blogger] Inferno was promised [by the feminists] to be destroyed along with red apples. Feminism will be worse than nuclear bombs. […] The action and counter-action did at least encourage discussion of the issues involved. Commenting on the Frontline Blog post, Zepani agrees with keeping the tradition.

The tradition of virginity bears some meaning in it. There are far reaching repercussions to having sex before marriage, and the aim of the tradition is to prevent certain consequences it can have if practiced otherwise – sexually transmitted diseases, pills that destroy the hormonal balance,unexpected pregnancy, abortions… which all affects the health.

However, another comment on the Frontline Club blog reminds readers that the custom is one-sided and also notes that many other traditions have long since died out.

There is a simple argument here – either one accepts men and women are equal in dignity, or one does not. If a man is expected to lose his virginity before getting married, and a woman is supposed to keep hers, there is something fundamentally wrong and illogical […]

We like to talk about our ‘ancestral traditions’. Well, in pagan times, one of those traditions was that a newlywed bride had to sleep with most of the male members of her new family straight after marriage. Or that virgins were sent to the temple of Astghik to work as prostitutes. Perhaps we could resurrect those ‘traditions’ as well?

A conservative female blogger, Noni-no, says those against the tradition are fighting something that doesn't really exist.

But I, living in Armenia from the day I was born and having been absent from my country with a total of a few months – meaning I who hasn't missed my nation's greatest events – all these time I don't remember hearing one instance of [someone showing virginity bloodstains] to neighbors. This [the red apple] is more of a word of mouth myth. And it turns out feminists have decided to fight unreal forces…

Another commenter on the Frontline Club blog disagrees and says that many of those opposed to the rally are missing the point.

[…] i think the aim of the march was to raise questions regarding women’s rights and their choices in general, and those issues are not really so different – the red apple is just the ceremony of celebrating no choice! because while virginity and purity may be celebrated by two lovers, i don’t see what exactly is being celebrated by the neighbors, relatives, and the wider public […]

The Armenian Observer agrees and says it is time for changing a tradition that is no longer practical.

Admittedly, the ‘red apple’ made perfect sence in the old days when the tradition was instituted. We all know, that in old Armenia young people would get married when they were just kids, at the age of 13-15 years. Hence, keeping virginity at least to that age made perfect sence and was even necessary.

Today, as the modern society and the need to get education have shifted the age for marraige by at least 10 years, and when young people get married at 23-25 at most cases, often even later, the requirement for young girls to remain virgins has become dangerous for their health.

Of course, the online virginity debate did not start with the March 2009 protest. One entry detailing discussion on the matter by young Armenians was posted on the blog of a Norwegian Red Cross volunteer in 2007.

Sargis Bashikyan (18), the only boy participating in this debate, argued that girls should wait until marriage because of the Armenian tradition called “The Red Apple”. […]

- Girls should not have sex before marriage, because they should save their body for the man they marry, says Metaqsya Yeghiazaryan (20).

She thinks that Armenian girls are more respected if they are virgins before they marry.

But Nelly Movsesyan (20) did not agree with Sargis and Mataqsya, and argued that boys and girls should decide themselves when they wanted to have sex.

A year earlier, other posts were made on the Oneworld Multimedia blog as well as by a local female blogger on New Eurasia. Comments have also been appearing on Wedding.am since February 2008. One comment by a male user said:

[I]f you denounce girls [for losing virginity] you fake men – why do you have sex? […] 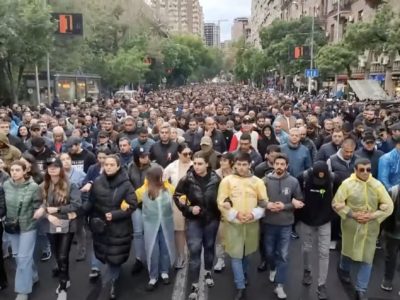