The recent downpour has been continuous and caught many by surprise. It caused a power outage, flash floods and land slides. Many of the rural areas have been cut off due to rising flood waters and land slide last night at Sungai Liang,  nearly cut off the main highway linking the capital with Kuala Belait, the western part of the country.

Many local blogs including BruneiMotors [1] have continued to monitor the affected areas as well as come up with early warning mechanisms to warm motorists of areas with impending dangers of land slide and traffic jams. Using google maps, they were able to show the affected areas clearly. Tips were also provided on how to drive on rainy conditions [2] and save the cars from flood waters [3].

Compilations of videos by those affected by the flood were also shown.

Born to be Pisces [4] documented the flood in her village, Tanjung Maya.

Just look at the pictures above. These were taken yesterday before turun keraja(  going to work). Hopefully the authority could provide boat or apakah  ( something) for them to cross the rapid flooded area. I read the newspaper today di Ukong ada ( there is a ) villager was bitten by croc kah… didnt quite read it though. Imagine that crocodiles bersantai dapan  rumah kami. ( relax in front of the house) .. have to be ready if hujan lagi turun today.

KB Happening [5] also documented the flood in her district which caused damage to cars and homes. Jidule [6] provided photos of landslide in Penanjong, which cut off road communication. 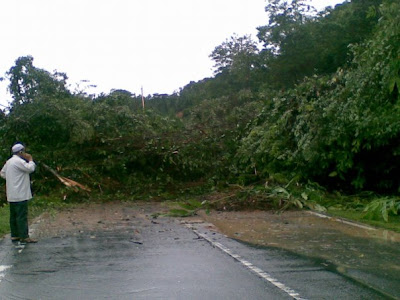 It seems residents have to bear more rains in the coming days. The National Disaster Management  Center [7] (NDMC) has set up a 24/7 monitoring and has collaborated with a local communication service provider, DST [8], to start an SMS campaign to alert local residents on impending rainfall and weather disturbances.