It is the middle of the annual North-East Monsoon season and Brunei has been experiencing strong winds and rainfall. It was just ten days ago that part of the country was submerged by waters. Blogs, no doubt play an important role in informing the public on the state of the rain and the aftermath. 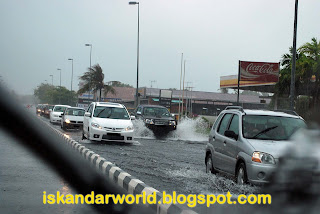 It was only ten days ago  Iskandar World [1] reported on the flood that has affected another district in the country, whereby his own home was affected by rising water levels.

I was anticipating for a heavy down pour once I reach home…but nothing no rain and not even a drizzle..asked myself mana tia ujan nya ani!…baik tah ujan labat2..heheeh…Oh! boy..my wish sure comes true. Woke up in the middle and found my room nearly flooded (carpets & all the cushions soaked wet), hiya! apparently, the water seep in from the balcony..From midnite till 3am..I was buzy cleaning….damn!!!!!

KB Happening [2] wrote that the rain is possibly, the impact from global warming.

A perfect day that KB and Seria got flooded – on the first day I return to work. Funny that we never seem to encounter these problem a decade ago. Either we are sinking or that global warming is taking its toll.

However, last night's rain has caused much stand still to parts of the country. A main highway underpass tunnel in the capital and some schools were closed due to floods. It has caused diversion in traffic.

AnakBrunei, [3] who was out on an errand trip, was caught in the rain downpour and  stuck in traffic for a few hours.

Finally after another hour or so, traffic started moving again, thanks to the traffic cops on duty. All in all, what should have been a quick 30 minute trip became a 3 hour adventure!

BruneiMotors, [4] a blog that focus on car enthusiasts played good samaritans in informing the public on the state of the rain and areas that are affected by the floods.

]The flash flood occured around 11.00pm to 3.00am on the night of 20/1/2009 and the Royal Brunei Police has block all the road that is unsafe for a motorist to pass through. They have done amazing job containing the serious area to avoid the road user from ruining their cars. Fire rescue and Ambulance are dispatch all around Brunei to monitor the safety of the public.

BruneiLifestyle [5] calls for a live traffic reports on radio to inform listeners on the current flood situation.

I think its high time for the authority to set up a ‘live’ traffic report especially during the current wet spell and air them over all radio channels in every half an hour or so. Or why not make use of the Internet – after all Bruneians are IT-savvy lots. Video reports live through the handphones to your hands.

The blogger also believes that the current rain and flood is due to the effect of  La Niña [6], with more thunderstorms expected until the end of this week:

Translated, La Niña means, “The Little Girl” , but sometimes she is called “El Viejo”, “anti-El Niño”, or even just “a cold event”. La Niña is characterized by cooling of waters in the central and eastern tropical Pacific Ocean and stronger than usual trade winds. It occurs almost as often as El Niño and also affects the normal weather patterns in some parts of the world, such as higher than normal rainfall in Southeast Asia.

No doubt bloggers become good samaritans in providing another medium to inform the public. Just like last year, Turqoise and Roses [7] blogged about a flood in one of the districts in the country. Although reported in the local paper, she updated her blog live from the affected area several times in a day.

The recent event in Brunei do explain the regional phenemenon currently experienced, as reported by others bloggers on GVO on floods [8] in Indonesia, Malaysia, the Philippines and Fiji,