Facebook made mainstream media headlines last week when it censored a photograph of a breastfeeding mother.  As Facebook has increasingly become a platform for organizing and debate, many are finding their content disappearing.

* ….. by clicking on link on Facebook which takes people here, which is a story about the terrorist organization responsible for the attacks in Mumbai being involved on Facebook itself. It was a topic of a conversation in a Facebook group, which originally occurred here: www.facebook.com/topic.php?uid=2204704082&topic=6904 (as you can see in the screencap)

* However, now that conversation is gone! What happened to it, Facebook? This is not the first time we have noticed this phenomenon. Many threads in various pro-Israel and pro-JIDF groups have mysteriously disappeared!

* It seems Facebook is extremely active in censoring content which might be “anti-Facebook” to some extent, yet the Jew hatred and promotion of Islamic terrorism remains.

* We tried to send the following message out to all our JIDF Facebook group members over 5 hours ago and it is either not going to go through, seriously delayed, or Facebook is censoring our content: 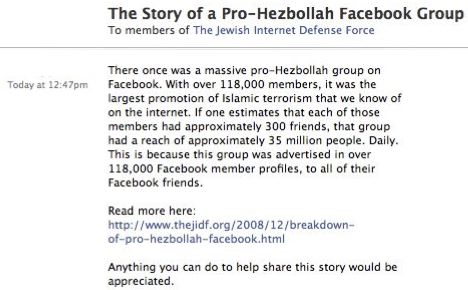 While JIDF believes that “Jew hatred and promotion of Islamic terrorism” remains on Facebook, it seems that supporters of Palestine and Gaza are finding their content censored as well. Rebelliousgirl expressed on Twitter that Facebook has prevented her from using hashtags: Facebook started to delete anti zionist content, we need to draw the maximum attention to Gaza cause, changing your first name into Gaza should help.

The blog to which Gaza Jad Madi links is Shuger Cuebs, which asks: “Is Facebook Violating Our Right to Free Expression?” The Palestinian blogger writes:

A friend of mine had to go through such an irritating experience with the facebook administration; according to Ibrahim Mughrabi, facebook has deleted content on his personal profile related to the “Zionist attacks on Gaza”. He says he’s been contacted by the administration and warned that he’d be suspended from posting stuff on facebook if he continues to do so!

So much for free speech and equal rights for everyone in this world.

Have you experienced censorship on Facebook? Let us know.